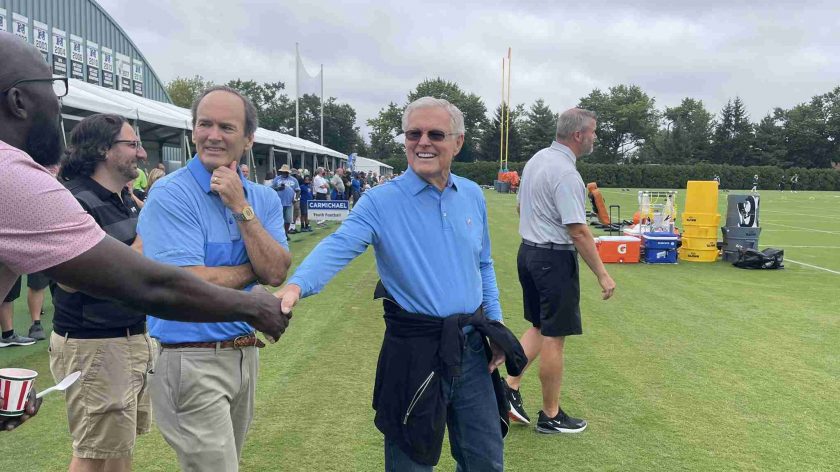 CANTON, Ohio – The love Dick Vermeil has for his former players and the love they have for him in return is no secret.

It will be on display for all the world to see Saturday afternoon when more than 200 of his former players from the Philadelphia Eagles, St. Louis Rams, and Kansas City Chiefs attend Vermeil’s enshrinement into the Pro Football Hall of Fame.

There will be tears. Lots of them. Mostly from the emotional 85-year-old Vermeil, but also from the people who have played and coached and rooted for him over the years.

“He’s going to choke up,’’ Wilbert Montgomery said. “And it probably won’t take long. It may not happen with the first name out of his mouth. But at some point pretty early on, it will.’’

The former Eagles great will be front and center for the festivities Saturday as the man he lovingly calls “Coach V’’ becomes the 28th coach to enter the Hall of Fame.

“That’s his helmet behind me,’’ Vermeil proudly said during an April interview at his home in Chester County. “It’s the one Wilbert wore when he played for the Eagles. We’re very close. The Eagles players toward the end of my career there used to call him Wilbert Vermeil.

“I was so grateful and appreciative of the effort he made for himself to get better and make a contribution to winning. His work ethic was beyond reproach.

“He never spoke. He was a very quiet, very humble kid. So you never could really figure out what was going on his mind. But he gave you everything he had to give.’’

A couple of weeks ago, Montgomery texted Vermeil. His former coach was moved enough by it to mention it in a Zoom call with reporters.

“It was about three paragraphs,’’ Vermeil said. “It was very personal and very touching and very real.’’

Said Montgomery: “Those are kind words from a kind-hearted coach. The guy loves all of his players.’’

True. But he probably doesn’t love any of them as much he loves Montgomery.

Wilbert was one of the key pieces on those late-70s and early ‘80s Vermeil-coached Eagles teams that rose from the ashes of nearly two decades of very bad football to earn four straight playoff invitations and make it to the Super Bowl in 1980.

A sixth-round pick out of Abilene Christian, Montgomery was the 27th running back taken in the 1977 draft.

“Jackie Graves recommended him,’’ Vermeil said, referring to the late Eagles scout. “He said he had some issues size-wise (he was a shade under 5-10) and had severe calcium deposits on his femur. But he said, ‘Coach, he has some off-setting qualities and I think we should draft him.’ We did.’’

Montgomery was a workhorse for Vermeil, playing through pain and injuries and averaging 22 touches a game for the Eagles from ’78 through ’81.

His 194 rushing yards in the Eagles’ 1980 NFC Championship Game win over the Dallas Cowboys, including a tone-setting 42-yard first-quarter touchdown run, is considered one of the greatest individual performances in franchise history.

Montgomery led the Eagles in rushing in six of his eight seasons in Philadelphia and finished with 6,538 rushing yards in those eight seasons, which was the franchise record until LeSean McCoy came along and broke it.

Vermeil abruptly retired after the ’82 season because of coaching burnout. He wasn’t around a couple of years later when the Eagles unceremoniously traded Montgomery to the Detroit Lions.

While Vermeil thrived as a broadcaster over the next decade-and-a-half, Montgomery struggled to find himself after his playing career ended following the ’85 season.

That all changed in January of ’97 when Vermeil ended his long coaching hiatus and took over the hapless St. Louis Rams. The first call he made after accepting the Rams’ head-coaching job was to Montgomery.

“He called me and said, ‘How does coach Montgomery sound?’’’ Wilbert said. “I was taken aback. I was a paper salesman when Dick called me. Selling paper for a company in Pennsauken.

“I didn’t know anything about coaching. I tinkered with it on the high school level at Overbrook (NJ) High School. Had a pretty darn good running back over there by the name of Ron Dayne. But high school coaching is nothing like the NFL.’’

Vermeil understood that, but was not going to take no for an answer from Montgomery.

“Because I didn’t make that 42-yard touchdown run, OK? That was him. And that was an easy run compared to so many of the other runs he made for us.’’

Vermeil retained a young assistant, John Ramsdell, from the Rams’ previous coaching staff and had him mentor Montgomery.

“I told John to work with Wilbert and train him, and that I would work with him too and teach him how to be a football coach,’’ Vermeil said.

“By midseason that first year, he was on his own and doing well. And when we drafted Marshall Faulk, they really hit it off. I used to stand next to them when Marshall would come to the sideline. They would discuss what was going on. I learned something from them. Because I wasn’t out there. You see it from their perspective.’’

Three years later, Vermeil and Montgomery won the Super Bowl that eluded them in Philadelphia.

Montgomery became one of the NFL’s most respected running backs coaches and coached in the league for 19 years. He was on two more Super Bowl teams with the Rams (lost in 2003) and the Baltimore Ravens (won in 2012) before retiring from coaching after the 2015 season.

“Working for Coach V, first as a player and then as a coach, defined my legacy,” Montgomery said. “He said hiring me as a coach was his way of repaying me. But I didn’t see it like that.

“When you get an opportunity like that you don’t want to let anybody down. And that’s what I felt I would’ve been doing if I didn’t try to keep that job and fight for that job after he gave it to me. It was the same way when he gave me that second job [as a coach]. I didn’t want to let him down.

“Dick set the bar for me. He’s a special guy. He’s all about caring for people. Coach don’t sugar-coat anything. He wears his feelings on his sleeve for everybody to see. He feels the way he does about his players because he understands that they’ve been a big part of his success. He’s where he’s at today because of them.

“Coach V is just a different guy. He’s different than any other coach I’ve known in the NFL or any other level.’’