Can the Phillies Make a Playoff Push? 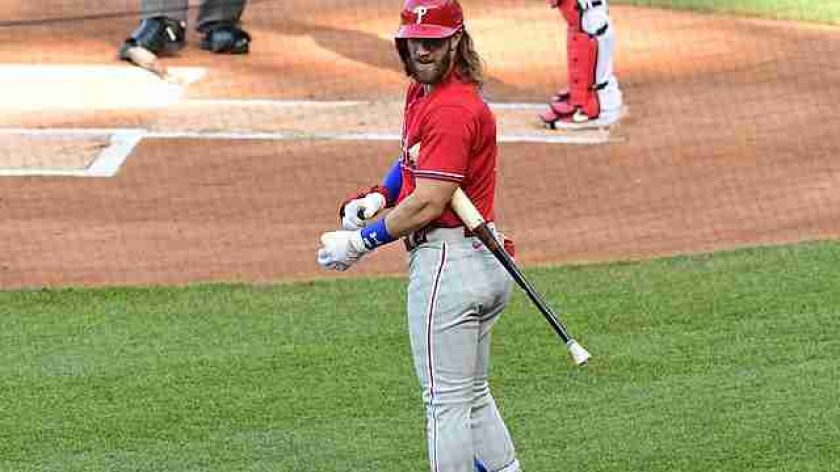 Photo Credit by All-Pro Reels from District of Columbia

The Phillies sit just 2.5 games out of reach for a wild-card spot in the National League playoff picture.

While the defense has been very on and off over the previous weeks, it’s the offense that needs to do more to make a playoff run.

Aaron Nola and Zach Wheeler have given Philadelphia strong performances in the rotation only to be wasted at times due to the inefficiencies in the batter’s box.

After losing reigning MVP Bryce Harper to a fractured thumb, the Phillies are in a challenging situation moving forward. Philadelphia has been playing well in June and the club is doing what it can to gain ground. Yet, the loss of Harper means that everyone else needs to step up and provide consistent offensive production.

Before the injury, Harper had been on a tear this season, putting up another MVP-level season. The Phillies’ slugger leads the league in All-Star votes for designated hitters and has compiled a .318 batting average with 15 home runs and a .985 OPS.

To classify Harper’s injury as unfortunate is an understatement for Philadelphia right now. After undergoing surgery, it is clear Harper will do whatever it takes to get back on the field as soon as possible.

“It’s going to take a group effort [to win without Harper],” said veteran Phillies reporter Jim Salisbury on Sports Take on Wednesday. “This guy is an animal… he really wants to get here quickly.”

As Salisbury stated, a true group effort will be needed to overcome Harper’s absence from the lineup.

Kyle Schwarber has been doing his part in June but he needs to keep that going with little room to begin drifting away from his exceptional play.

Rhys Hoskins also needs to avoid a slump after having such a strong last few weeks. Additionally, it is time for Alec Bohm and Bryson Stott to prove why they are the best young options for Rob Thomson to keep turning to. Yet, the ones that are expected to pick up the slack the most due to their reputation are J.T. Realmuto and Nick Castellanos.

Realmuto and Castellanos are two of the names that take up larger amounts of the Phillies’ payroll, but they have not been performing up to their contracts as of late. Coming off an All-Star season in 2021, Realmuto has been disappointing as a hitter in the middle to top parts of the lineup this time around, batting just .239 with only four multi-hit games in June.

A player of Realmuto’s caliber needs to be producing more offensively.

The Phillies organization obviously had very high expectations for Castellanos after signing his $100 million contract. Yet, the slugger has not been very effective lately.

Castellanos is sporting a .248 average with only eight home runs, with Thursday night’s home run against the Atlanta Braves being his first since May 30. He did rack up a four-hit day in the final game of the recent San Diego Padres series, so he may be turning things around.

The Phillies are still in shouting distance of the pace-setting New York Mets in the NL East, standing 7.5 games behind, but the far more likely path to the postseason is the wid card.

The Phillies have the tools to be one of the three wild card teams even with Harper having to miss significant time. To do that, however, more consistency through the lineup is needed.

– You can reach Alex Schmidt at schmidty24236@gmail.com