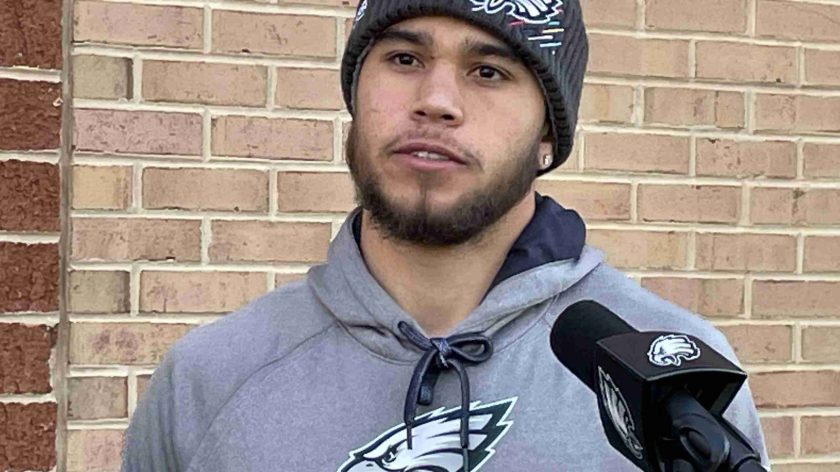 MIAMI GARDENS – On the eve of the Eagles’ final preseason game against the Miami Dolphins, much of the roster looks set with the initial cutdown to 53 set for Tuesday, Aug. 30.

The notable exception to that is safety where players like Josiah Scott, K’Von Wallace, Jaquiski Tartt, Andre Chachere, and Reed Blankenship could all factor in behind projected starters Marcus Epps and Anthony Harris.

Howie Roseman could also look outside the organization via trade or the waiver wire for both depth or perhaps even a starting-level player.

The one name who you can use ink with is Epps, the fourth-year player who has been one of the team’s most improved players in camp.

“Marcus Epps has taken a little bit of a leadership role, more than last year because he’s playing more, and his production is high, and he does everything right,” defensive coordinator Jonathan Gannon said. “Anthony Harris is another one. He’s been a leader since I met him as an undrafted rookie in Minnesota, so he has leadership traits.

“That whole room from a football character standpoint and doing things right on a daily basis, that’s what a leader is to me, and they all do that.”

That said the Eagles tried to sign high-profile free agent Marcus Williams in free agency before being outbid by Baltimore and also talked with the Ravens about Philly native Chuck Clark, who is now in a log jam due to the presence of Williams and rookie first-round pick Kyle Hamilton, over draft weekend, dangling receiver Jalen Reagor.

The Eagles also kicked the tires on Tyrann Mathieu before the Honey Badger went home to New Orleans.

Complicating matters even further are soft-tissue injuries to Scott (hamstring) and Chachere (groin) that have kept the two versatile players out of recent practices.

That, along with a strong performance in Cleveland during the preseason game, seems to have given new life to veteran Jaquiski Tartt, who handled all the second-team work in Miami, with K’Von Wallace and undrafted rookie Reed Blankenship mixing in next to him.

Because he’s vested the Eagles could also play roster games with Tartt. If vested veterans are on the Week 1 roster their contracts are guaranteed for the season so Howie Roseman may release Tartt with a wink, letting him know he would be brought back for Week 2 when the contract would not be fully guaranteed.

That kind of shenanigans could also allow the Eagles to keep a younger player through the heaviest point of roster machinations, making it easier to toggle players back to the practice squad.

If you’re a betting man, put money down on the versatility of Scott, feel comfortable with Chachere for the same reason, and try to decide between Tartt and Wallace with Blankenship earmarked for the practice squad.