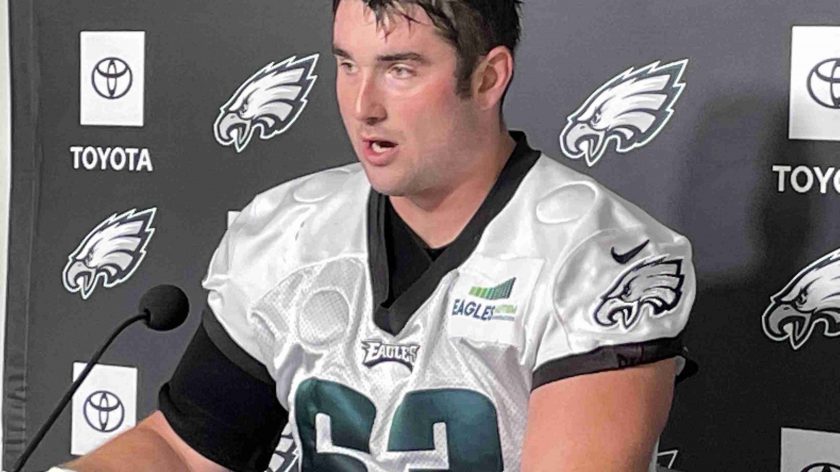 PHILADELPHIA – Howie Roseman has buttoned up the Eagles’ roster so well this offseason that there isn’t that much intrigue when it comes to positional battles and most of the plot twists that do exist involve going outside the organization.

Marcus Epps will be given the opportunity to win a starting job at safety but if that starts to go south, there’s some pie-in-the-sky hope when it comes to Cincinnati star Jessie Bates, who is currently balking at the franchise tag with the Bengals, or perhaps Philadelphia native Chuck Clark who seems like the odd man out in Baltimore after the Ravens signed Marcus Williams to big money and the drafted Kyle Hamilton.

The punting position, meanwhile, isn’t that sexy but it is curious that the Eagles didn’t bring in competition for Arryn Siposs after the strong-legged Aussie faltered down the stretch of the 2021 campaign.

Then there are plenty of depth questions like who is going to be the TE2 behind emerging star Dallas Goedert with the rehabbing Tyree Jackson, who tore his ACL in Week 18 last season, Jack Stoll, and rookie sixth-round pick Grant Calcaterra the most relevant to the conversation.

When it comes to Nick Sirianni’s offense, however, there isn’t much to discuss. There will be nominal competition at WR3 but Quez Watkins is the prohibitive favorite over veteran Zach Pascal, who is better suited as a fourth option/special teams contributor, and 2020 first-round pick Jalen Reagor, who is likely closer to moving on than he is to Watkins in the coaching staff’s mind.

That leaves the only legitimate competition at right guard, where the returning Isaac Seumalo will try to hold off Jack Driscoll.

Appearing on JAKIB Sports’ “BIRDS 365” Wednesday morning The Athletic’s Zach Berman handicapped the competition with Seumalo as the 60% favorite followed by Driscoll at 35% and rookie second-round pick Cam Jurgens, a natural center and the new heir apparent to Jason Kelce, at 5%.

Seumalo, of course, had developed into a very solid left guard before suffering a Lisfranc injury in Week 3 of last season. In his absence, talented rookie Landon Dickerson performed so well that the Eagles don’t want to upset the apple cart of Jordan Mailata and the former Alabama star as a duo on the left side.

“For us, going through the season and seeing Landon and Jordan next to each other, I mean, that’s imposing,” GM Howie Roseman said earlier this spring. “We felt like the chemistry that they had developed going forward and how young those guys are, just developing that left side (makes sense).”

That forces Seumalo to the right side and the good news is that the seventh-year player is known for his versatility. He’s played every position on the O-Line dating back to his college days at Oregon State.

Driscoll, meanwhile, was drafted as a natural right tackle in 2020 out of Auburn but excelled when forced to move inside last year, grading out as Pro Football Focus’ 20th best offensive guard, two spots ahead of his mirror on the left who the Eagles have publicly raved about in Dickerson.

In other words, this projected competition is a lot closer than most understand.

“[Driscoll is] a more natural right-side setter for starters,” the former scout noted. “[Left and right guard are] very different spots in what they usually face up front. I think Jack has cleaner technique, knows how to use his body more efficiently in those tighter spaces, and gets his hands on defenders quicker to control their momentum better.

“He’s a great technician. Isaac’s certainly good with it himself. I just think Driscoll played way too good there [at RG] for them to consider a change.”

The Eagles could use both but Seumalo is only under contract through 2022 with a significant $5.65 million salary and an even more significant $7.668M cap hit so Driscoll has already taken the lead in-house when it comes to the longer-term thinking.

If Driscoll is the guy in 2023 and the two players are close to even why not start the transition now and try to spin off Seumalo?

“My reasoning for this whole thing has very little to do with Isaac and much more to do with the others [Drisoll and Sua Opeta]. They showed they belong and can execute at a high level consistently,” the former scout said. “So it may open up a thought process for Howie that could provide some leeway cap-wise to do other things.”

It’s a nice problem to have for Roseman and the coaching staff, though, because both Seumalo and Driscoll are starting-caliber right guards.

“Isaac could very well end up being the guy there if it they leave it as is,” the ex-personnel exec noted. “It’s just that the big-picture difference would be so minimal solely because of Driscoll and Opeta’s track record.

“I love Isaac and hope he gets to start somewhere.”