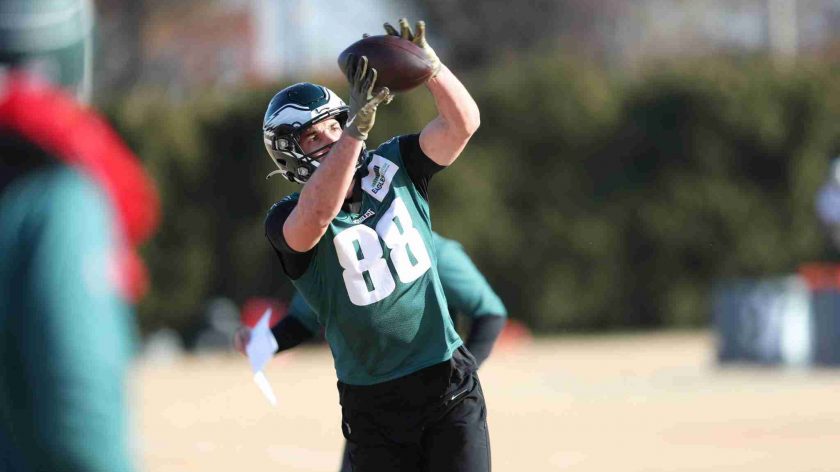 PHILADELPHIA – The Eagles are getting healthier.

Davis has missed the past four games with a high-ankle sprain suffered against Pittsburgh on Oct. 30. The rookie was placed on injured reserve, a mechanism that meant Davis had to miss at least four games. If deemed ready by Saturday at 4:00 P.M., Davis could be activated and play against Tennessee and its star running back Derrick Henry on Sunday.

Conditioning is likely the final hurdle for Davis, who had developed into a big part of the Eagles’ off-man front looks as the nose tackle. In his absence, Philadelphia was forced to go outside the building and get veteran Linval Joseph to calm its run-stopping fronts down a bit and the 34-year-old has done an outstanding job since arriving for the Indianapolis game on Nov. 20.

When Davis does return the ability to rotate the two nose tackles should help keep everyone fresh for the stretch run.

As for Goedert, the tight end had ditched the sling and believes he will be ready to play when eligible to come off IR, which would be on Dec. 18 at Chicago.

Goedert was injured in Philadelphia’s only loss of the season, against Washington on Nov. 14. He was violently pulled to the turf by his face mask by Washington LB Jamin Davis just as defensive lineman John Ridgeway was driving his shoulder into the turf.

Not only was Goedert injured on the play but he fumbled. He described the injury as a small fracture to the glenoid of the shoulder.

Always pushing, Goedert says he would have liked to skip the trip to IR and tried to play sooner but also realizes that part of the process is allowing the bone to heal properly.

“I miss being out there,” he said. “Just counting down the days until they can take me off IR. I told (GM) Howie (Roseman), man, you shouldn’t have put me on (IR). I got this special human power. I got Psoriasis, you guys know what that is? It makes me like ‘Deadpool.’ I can get stabbed and it heals right back up.”

Goedert said the shoulder was never dislocated nor were his labrum or rotator cuff damaged.

The Eagles’ passing offense has struggled a bit without Goedert’s presence but the team has persevered with two consecutive wins, at Indianapolis and vs. Green Bay, Goedert’s favorite team as a kid growing up in South Dakota.

“It’s difficult,” Goedert said of his absence. “I just love being out there. I love playing football. I think (Saints quarterback) Jameis Winston said it best. Until you don’t play you don’t realize I don’t love football.

Goedert praised backup Jack Stoll’s performance in his absence and pointed to the team’s 363-yard rushing day against the Packers to highlight a different kind of effect the TE group has had in his absence.

“They’ve been killing it,” Goedert said of the tight ends. “You know Jack has been doing an excellent job in the run game. They haven’t gotten their opportunities in the pass game very much but anytime they do, it seems like they make a play.

“Any time we can run for darn near 400 yards, you know somebody’s doing a good job.”