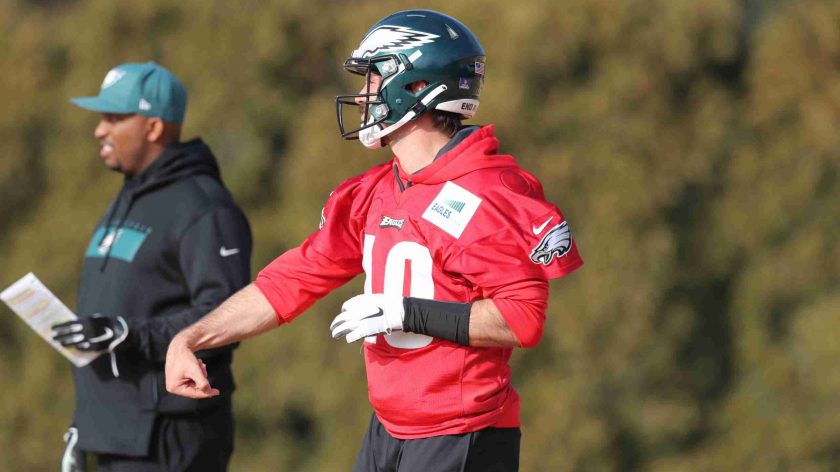 The Carson Wentz era taught the Eagles a valuable lesson when it comes to the valuation of the backup quarterback position and it’s one that Howie Roseman stresses when it comes to roster building.

It’s the reason Jalen Hurts is in Philadelphia right now as the No. 53 overall pick of the Eagles in 2020. The original plan wasn’t for Hurts to be leading the team by 2021 any revisionist history about an insurance policy is just that.

Hurts was brought to Philadelphia to serve as a cost-effective backup for Wentz, who had just been given the keys to the franchise in the form of a record extension the previous offseason, at a locked-in rate for four years.

It’s fair to point out that the Eagles did a poor job forecasting the potential unintended consequences of the decision and Hurts’ presence was part of a cocktail that sent Wentz into a tailspin but that doesn’t change the organization’s thesis of valuing the backup QB position, only the execution of a sound plan.

With Wentz out the door by last season, Hurts was elevated to be a first-time starter but as an unproven commodity, Roseman went to work by first signing veteran Joe Flacco and then acquiring Gardner Minshew with two years of control from Jacksonville for a conditional sixth-round pick.

A borderline starting-level option in the league right now, Minshew had been at the controls for the Jaguars in 20 games over his first two pro seasons but became expendable after Jacksonville took Trevor Lawrence with the No. 1 overall pick in 2021.

Minshew excelled statistically for Jacksonville with 37 touchdowns vs. 11 interceptions and a 93.1 passer raring and he probably won more than he should have with a bad team led by a worse organization (7-13 as a starter).

In fact, when Minshew arrived on Aug. 28 last year few could say he wasn’t a more proven option than Hurts although by coming in late in the preseason process Minshew started his Eagles’ career as the best QB3 in football behind Hurts and Flacco.

The Eagles ultimately traded Flacco to the New York Jets before the trade deadline, getting their conditional sixth-round pick back, another deft move by Roseman, and Minshew was elevated to the backup job. By Dec. 5 when Hurts was forced out of the lineup due to an ankle injury that eventually acquired offseason surgery, Minshew lit up the hapless Jets with a 20-for-25 performance for 242 yards with two touchdowns and a 133.7 passer rating.

Despite the ‘it was only the Jets’ sentiment that followed, the performance had the confident Minshew knocking on Nick Sirianni’s door to ask what he had to do to be the starter before the coach quickly quelled things.

“I will say about Gardner, he is a competitor,” Sirianni said at the time. “He is locked in, whether he’s the backup, whether he’s playing. The guy is going to prepare like crazy, no matter what the situation, and he’s competitive. Of course, every backup that we have on this team, if they didn’t want to be the starter, I would have an issue with them being the backup.”

“One thing this coaching staff is big on is transparency and knowing where you stand, so I was going in there, and I am a competitive guy. We are all competitive guys that want to play,” he said. “I was asking what it took and he said we are solid right now. I respect that and I am going to do everything I can to put myself in that position at some point.”

In other words, Minshew wants to be a starter in the NFL again and he might even get that opportunity in 2023 because this will be the final season and his rookie deal.

Those thinking the Eagles might move Minshew if a nice deal was out there were probably correct earlier in the offseason but now with all the windows shut when it comes to other capable backup alternatives, the Eagles almost have to kick the can as far as the road goes with Minshew understanding that Hurts’ style of play might force the backup into action for a game or two in a best-case health scenario like last season.

““Minshew Mania” continues to be floated by some in Seattle which is preparing to embark on the post-Russell Wilson era with Drew Lock and Geno Smith but even a Day 2 draft pick at this point would be a Sophie’s Choice for Roseman.

The Eagles’ GM certainly understands if Minshew has a starting option next spring he’s moving on but pulling the trigger now would mean Reid Sinnett or undrafted rookie Carson Strong would be a snap away for a team that seems to believe it can contend.

The only path to trading Minshew would be getting value (that Day 2 pick?) while also acquiring a top-5 level backup option elsewhere, likely for a Day 3 pick.

And that’s likely too many moving parts, even for Roseman.