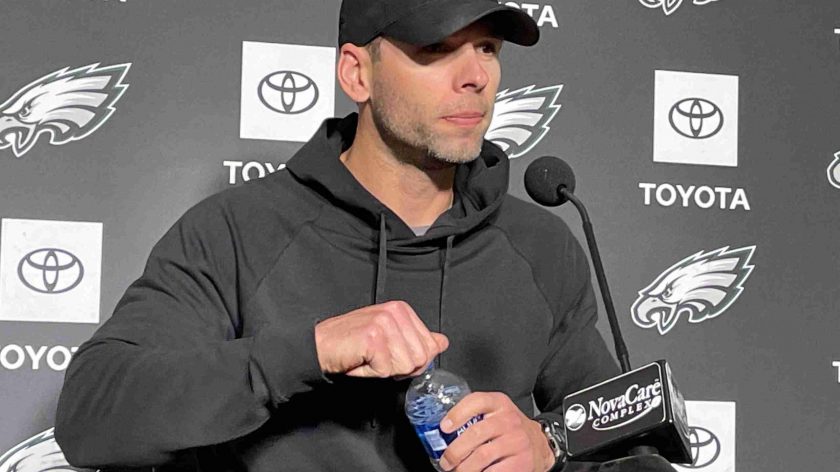 PHILADELPHIA – Jonathan Gannon was on the wrong side of the 2018 NFC Championship Game when Doug Pederson’s Philadelphia Eagles routed the favored Minnesota Vikings, 38-7,  en route to winning Super Bowl LII.

Then an assistant defensive backs coach with the Vikings, Gannon earned a healthy respect for Pederson’s play-calling ability.

“I have a very high opinion of Doug,” Gannon said on Tuesday. “He’s a very good play-caller. He doesn’t have a lot of tendencies. You can’t bank on certain things coming.”

Now the head coach in Jacksonville, Pederson returns to Lincoln Financial Field Sunday for the first time since being fired by Jeffrey Lurie after the disappointing 2020 pandemic season.

“I’m really looking forward to getting back there,” Pederson said on Monday when talking with Jaguars reporters. “I understand that city, I understand the passion for football, but now I’m on the other side.”

Pederson is sure to be welcomed warmly by the majority of Eagles fans, at least until the kickoff when the laundry being worn is the more important factor than nostalgia.

The Jags are a traditional doormat but Pederson already has Jacksonville humming along with the sixth-ranked offense in the NFL built around the 2021 No. 1 overall pick Trevor Lawrence, who is finally looking like a No. 1 overall pick after his lost rookie season with the overmatched Urban Meyer.

Much like he did in Philadelphia for Carson Wentz, Pederson has surrounded Lawrence with impressive offensive minds, including himself, offensive coordinator Press Taylor, quarterbacks coach Mike McCoy and passing game coordinator Jim Bob Cooter, a former Nick Sirianni confidant from last season.

“[Perderson is] doing a good job with the quarterback playing extremely fast,” Gannon said. “[Lawrence] has weapons. They protect him. You have to be aware of their skill guys because their skill guys have very significant skill sets”

The Jaguars’ running game is led by James Robinson and Travis Etienne while Lawrence’s top targets are Christian Kirk, a player the Eagles had significant interest in during free agency until getting priced out of the market, Zay Jones, and Marvin Jones.

Lawrence, though, is the straw that stirs the drink and is completing 69.4% of his passes for 772 yards with six interceptions and just one interception for a 103.1 passer rating.

The Jaguars’ plus-7 turnover differential is tops in the NFL.

“It’s just like everybody, you have to know your opponent because they do some things with those guys that he allows those guys to play free,” Gannon said. “[Pederson] puts them in good spots.

“They make a lot of plays.”