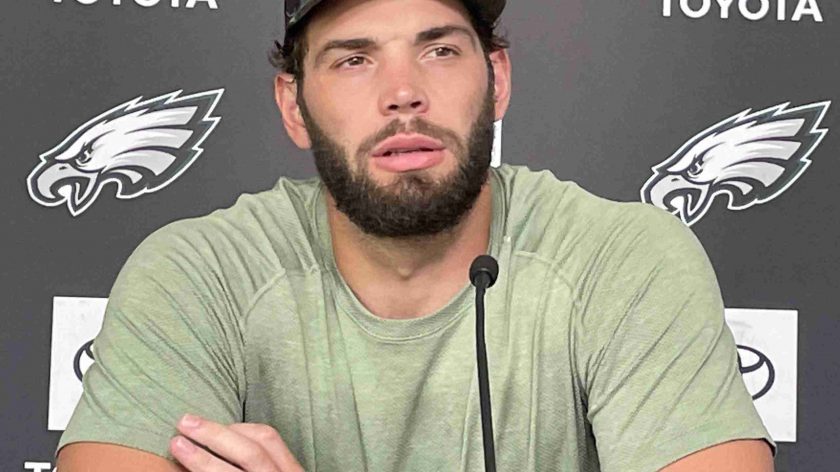 When it comes to the tight end position on the Philadelphia Eagles depth chart, the reliable options after Dallas Goedert are slim. Goedert has proven to be a dependable and top-tier player at the position in the last couple of seasons, solidifying the TE1 spot after Zach Ertz’s departure.

There is not much to be confident with on the roster after Goedert, though.

Nick Sirianni’s offense morphed to using two tight end sets quite a bit last season, so finding a trustworthy and impactful TE2 is more than necessary.

John McMullen expressed how TE depth could be a concern for the #Eagles #FlyEaglesFly pic.twitter.com/7yS1OQSq2o

Options to turn to currently include Jack Stoll and Richard Rodgers, who haven’t produced consistently in their time with Philadelphia.

In addition to Tyree Jackson, who is expected to begin training camp on the PUP list as he continues to rehab from a torn ACL, J.J. Arcega-Whiteside has also been moved from wide receiver to tight end in an effort to salvage something from the 2019 second-round pick.

Finally, the Eagles have Noah Togiai who remains an unknown despite two stints with the Eagles, and rookie sixth-round selection Grant Calcaterra, who may be the leader in the clubhouse for TE2 if he can stay healthy.

If the Eagles are forced to go outside the organization here are some options:

Ebron is coming off his worst season where he had 12 receptions and one touchdown in the eight games with Pittsburgh in 2021. Having such a down year, due to injury struggles, was rather uncharacteristic for him compared to his previous 2020 season with the Steelers when he was targeted 91 times.

Ebron’s best season was 2018 in Indianapolis where was targeted 110 times and hauled in 13 touchdowns. The North Carolina product is still capable of being a playmaking and reliable tight end, regardless of his knee injury last season. While he would serve as nothing more than a complement to Goedert, Ebron would drastically improve trust in the tight end depth.

The former Pro Bowler has ensured that he is now healthy and ready to play. He can be a trusted force in the receiving and can serve as a solid blocker when the opportunity presents itself.

The ex-Dallas Cowboy has valuable experience in the NFC East and may be looking for some revenge after being released due to a hip injury. Injuries have plagued him in the past two seasons, including an ACL tear in 2020, but Jarwin can still produce when he is needed.

In his first two seasons with Dallas, Jarwin did not put up any top-notch statistics, but he was a dependable option when Dak Prescott found himself in trouble. Scoring three touchdowns in each season with 27 receptions in 2018 and 31 in 2019 is respectable enough to consider him an asset to an offense.

Jarwin underwent surgery in late February on his “uncommon” hip injury and has reported that he might not be ready for the start of the season, however. While it is a difficult situation to work around, signing him to a small one-year contract and waiting for a full return is not unreasonable. If anything, his signing would provide the Eagles with more depth at tight end rather than just throwing Jarwin in as the definite TE2.

The former Penn State Nittany Lion did not seem to find a home in Chicago last season while competing for playing time with Cole Kmet. James only managed to rack up seven receptions and one touchdown in the 14 games he was in during 2021. He has bounced around the league a bit in the last number of seasons, but his decline in production is hurting his chances.

Since entering the league in 2015, James has seemed to serve as nothing more than a secondary or last resort option for quarterbacks. James had a decent stretch of seasons in Pittsburgh from 2016-2018 which allowed him to become a reliable option for teams to explore after his departure. Yet, his numbers just seem to keep decreasing and his role keeps getting smaller.

The lack of intrigue around him from the league can be useful for Philadelphia if he were to be a consideration. Philadelphia would be able to acquire him for practically next to nothing. James has shown that he can be a solid option to turn to if necessary. Throwing him in the mix at tight end could prove to be a larger positive outcome than expected when considering where he stacks up against the other tight ends on the roster after Goedert.