Food for thought: How good could Jordan Davis be as a third-down edge-rusher? 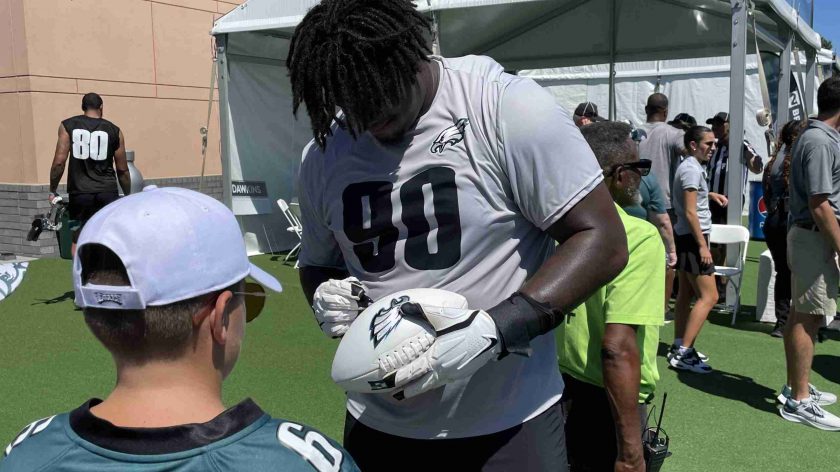 Jordan Davis is 6-6 ½ and, depending on how many stacks of pancakes and sausage links he devours on a particular morning, tips the scales at somewhere in the vicinity of 330 and 345 pounds.

The rookie defensive tackle showed in the 13 snaps he played in his NFL preseason debut Friday night against the Jets just how disruptive he can be when he lines up inside over the opposing center and guards.

But Davis is more than an enormous guy who can blot out the sun and close interior roads for running backs. He’s also an athletic freak who ran a 4.78 forty at the NFL pre-draft scouting combine.

That included an even-more-impressive 1.63-second 10-yard split, which was comparable to the top three edge-rushers in the April draft – his former Georgia teammate Travon Walker (1.54), Aidan Hutchinson (1.61) and Kayvon Thibodeaux (1.56).

Davis almost certainly will be lining up inside for the Eagles on first and second down this season. But given his freakish speed and size, might Eagles defensive coordinator Jonathan Gannon be tempted to at least occasionally line him up on the edge in obvious passing situations?

The prospect of a man that big and that fast coming off the edge with a running start certainly is intriguing.

“Fletcher Cox said it best the other day,’’ said Paul Francis, the former global head of sports science for Adidas and one of the country’s most respected sports performance experts. “He said it’s hard to stop a big train when it’s moving. This guy not only is big. He’s also fast.’’

Gannon is a smart, creative coach who has a number of versatile defensive linemen that he can put anywhere across the front.

He already has lined up Fletcher Cox on the outside in practice a few times. Second-year man Milton Williams can play inside or outside. So can Brandon Graham, who had the biggest sack of his career from the tackle spot in Super Bowl LII.

And then there’s Davis.

Francis uses a metric that calculates the pounds of momentum a rusher can generate at 10 yards. You take his speed, convert it to yards per second and then multiply that by his body weight.

According to that metric, Davis is able to generate 2,000 pounds of momentum at 10 yards. There isn’t another defensive lineman in the NFL who comes close to that. Whether there’s an offensive lineman who can stop that much momentum, well, that remains to be seen.

“First contact for an edge-rusher typically is going to happen at one second, which is at five to 10 yards,’’ Francis said. “In all of the years I’ve been running this metric, you only need 1,200 pounds of momentum to break through the offensive line.

Francis said Davis also would benefit from the fact that his size coming off the edge would make him so intimidating that an offensive lineman almost certainly is going to be back-tracking, which would reduce the effectiveness of his own weight by 30 or 40 pounds.

“One of the best defensive drafts in recent memory was 2017 when Myles Garrett went No. 1,’’ Francis said. “T.J. Watt went 28th. Myles is what I would call a pursuer. Once the coverage has done its job, he can chase the quarterback for a week. His average time on his sacks is around four seconds

“Someone like Watt, he can get to 1,200-1,300 [pounds of momentum] more frequently. So he can drive straight through people. He’s got more sacks under three seconds than anyone else in that draft, including Garrett. T.J. has won the last two NFL sack titles. And no one comes close to him in average speed of sacks.

“When I look at Jordan, he’s bigger than [the 6-4 ½, 280-pound] Garrett and has the intensity of Watt. I feel he could be unstoppable off the edge. His ability to generate power is unmatched.’’

Francis isn’t bothered by the fact that Davis had just seven sacks in 46 games at Georgia, including only two last year, or that his arsenal of pass-rush moves basically begins and ends with a bull-rush.

Georgia coach Kirby Smart’s defense is linebacker-centric. The main job of the defensive line is to occupy blockers and open lanes for the linebackers. Walker, who was the first pick in the draft, only had six sacks last season.

“There’s two schools of thought; you either develop your strengths or you deal with your weaknesses,’’ he said. “I’m very much in the develop-your-strengths corner.

“If Jordan can be dominant with that bull-rush, why does he need to develop other weapons, other tools. I think he will develop some as he goes along.

“Using a baseball analogy, if a pitcher has an extraordinary fastball, occasionally he’s going to mix it up. But you’re not going to tell him to start developing other types of pitchers that are going to dilute his fastball.

“If you think of that from a defensive end point of view, Jordan has an incredible fastball. He will learn how to mix that up and how to disguise it. But [the bull-rush] always is going to be his go-to move. It’s always going to be the one that’s going to allow him to get to the quarterback faster than any other move.’’