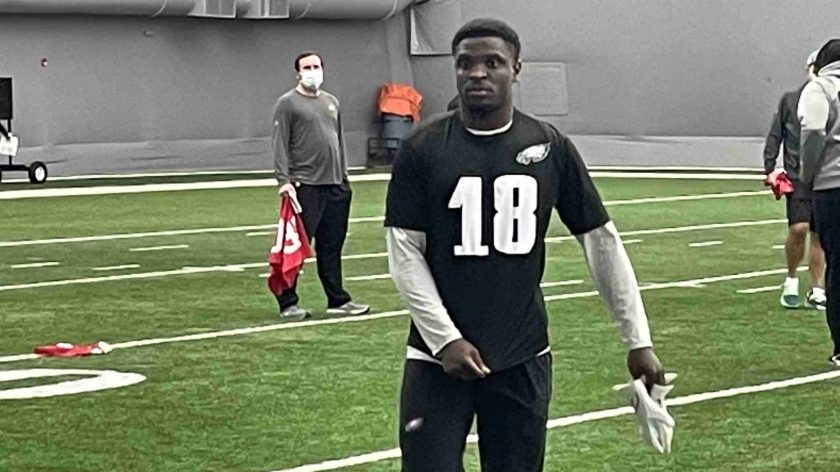 If idle hands are the devil’s workshop, you can imagine what downtime means when it comes to Philadelphia’s passion.

The Eagles and their potential are debated endlessly by the organization’s fan base and when there is no tangible evidence to watch, perceptions are often turned into accepted truths.

It’s actually a fascinating study of the human mind and we’ll continue to see it unfold over the summer.

Entering training camp, however, here are five current perceptions that will likely be quickly derailed.

Jalen Reagor is a lost cause – Time stamp this one to revisit if you’d like.

The perception surrounding the failed 2020 first-round pick (to date) is that Reagor simply can’t play but most of the TCU product’s issues really do boil down to confidence. He’s immensely talented and the revisionist history that the Eagles reached wildly for Reagor at No. 21 overall is pure fantasy. If Philadelphia hadn’t selected the receiver, New Orleans, with offensive genius Sean Payton, were poised to take Reagor in the 24th slot.

The point to that is Reagor has significant skill and that tends to show up in training camp, especially with a guy who has first-round talent and is playing mainly against second- and third-team players which will be the case for Regaor in camp this year.

It would have been pretty cool if Reagor did this kind of thing in actual games. pic.twitter.com/me91pmr7YJ

Other than A.J. Brown and DeVonta Smith, Reagor will look like the best Eagles WR in camp and the key for the organization is figuring out whether the switch has really flipped or if it’s fool’s gold.

This brings us to our next bullet point, the slot position.

The plan is to move forward with Quez Watkins and/or Zach Pascal as the WR3 with the slot being the main component to that although there is a cushion in that Smith is the best slot option the Eagles do have and they can simply play Three-card Monte in 11 personnel.

Reagor, though, is much better suited for slot work as a receiver than either Watkins, who is self-admittedly far more comfortable outside, or Pascal. That caveat is needed because Pascal is the better option as a run blocker.

The best-case scenario is for Howie Roseman to remove the siren’s song of potential by dealing Reagor along the way.

Nakobe Dean is a Day 1 Starter – The goal here should be that Dean starting by Week 8 or Week 9 but the high-profile nature of his college career at Georgia and the fact that fans lived through months of significant hype for Dean as a ‘no doubt about it’ first-round pick has skewed expectations.

The Eagles started Dean slowly in OTAs and the same will be the case at training camp with the first goal of gauging how healthy the rookie is.

Joe Schoen on Nakobe Dean: "There’s a reason he’s dropping. We can’t talk much about that.”

But said he’s a great kid. Doesn’t sound like #Giants have interest.

From there Dean will be cross-trained at both the WILL and MIKE spots with the goal of getting him involved in a three-man rotation with T.J. Edwards and Kyzir White.

The Base Defense – This is a pet peeve of mine for a couple of reasons starting with the fact it’s the question I get the most and the premise is always 4-3 vs 3-4 as the base defense now that Jordan Davis is here.

The answer of course is neither and not just because Jonathan Gannon wants to use multiple fronts.

Even if Jim Schwartz was still in Philadelphia the 4-3 wouldn’t be the Eagles’ “base defense” because you’re in a nickel look 60 to 70% of the time in the modern NFL so that’s the default with the traditional trope being the subpackage. In other words, Avonte Maddox is a starter with the Eagles, not the third LB or edge defender.

Semantics aside, once you get past that, the look you’re likely to see the most up front is what Gannon describes as a 5-2 “overhang” with Haason Reddick at the standup SAM LB bookended by Josh Sweat on the other side. The key to that is who plays inside the most with Davis on early downs, and Gannon has plenty of options with a stout DT look of Fletcher Cox and Javon Hargrave or lighter paths that could include Brandon Graham, Milton Williams, or Derek Barnett.

Safety Valve – Do the Eagles really believe they are a significant contender?

That will likely answer the question of who gets the most playing time at safety. The available options aren’t great, something you can guess by the size of the contracts given to veterans Anthony Harris and Jaquiski Tartt and the pedigree of Marcus Epps from a one-time walk-on at Wyoming to sixth-round pick to waiver-wire pickup.

An even bigger clue should be the money the Eagles were prepared to give to Marcus Williams before the Ravens went nuclear and the realization that the team certainly kicked the tires on Tyrann Mathieu before the Honey Badger went home to New Orleans, although that interest was somewhat overblown unless the price tag was coming down.

Tartt was brought in as a safety valve as a player who at least knows how to play and understands the concepts Gannon wants to employ. That said, the Eagles would prefer that Epps seizes the job to add range and speed to the back end.