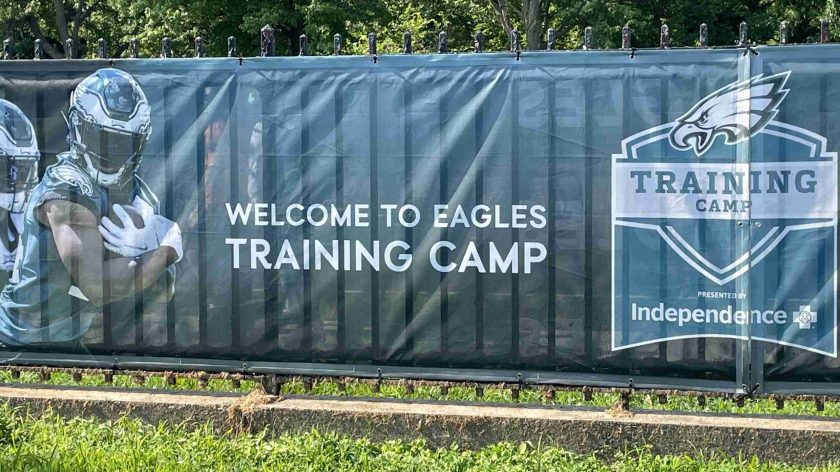 The Eagles report to training camp on July 26 and the cutdown to 53 is set for Aug. 30 this year. From there you can expect a few tweaks once the waiver wire is flooded in advance of the Week 1 opener in Detroit, set for Sept. 11.

So why wait the 46 days to ponder what the Eagles’ 53-man roster will look like vs. the Lions?

Here’s our first look at how things will shake out over the summer for entertainment purposes only because GM Howie Roseman is surely going to add a name or two to the mix as things march on and injuries are unfortunately part of the process in the NFL.

-You can feel comfortable etching the top of the depth chart in stone with Carson Strong being the rare undrafted rookie who probably has to play his way off the roster. The issue with Strong isn’t upside. He’s got top 50-level arm talent from a draft perspective but a degenerative knee condition limits his mobility which could affect his chances to unseat Reid Sinnett as the developmental QB.

-The top three are locked in with Sanders set to enter his contract year as the lead back and Gainwell again poised to handle third-down and hurry-up duties, hopefully without losing them in Year 2 for him.

Scott will collect dust until needed and then perform. RB4 could very well not even be on the roster yet but let’s have some fun and project Brooks for now, who was a big producer at Oklahoma.

The speedy Jason Huntley’s path is as the kick returner but that would mean the Eagles have to find a trade partner for Jalen Reagor.

-The top four are locked in here with newcomers Brown and Pascal added to Smith and Watkins. The Eagles will not just cut the disappointing Reagor, the team’s 2020 first-round pick, but if they can convince another organization to buy into a reclamation project, that’s probably the best path for both sides.

Ward has developed into a leader and the expanded practice squad allows you to keep any developmental talent which makes it easier for the Eagles to carry the veteran.

It’s going to be tough for Jackson to make it back for the season-opener after tearing his ACL in Week 18 which makes things a bit easier when it comes to the 53.

Calcaterra, a rookie sixth-round pick with upside as a receiver, and Stoll, more of a blocker, will caddie for a star in Goedert. This is a position the Eagles could look outside the organization for depth as well.

It looks like the end of the road for J.J. Arcega-Whiteside after a position switch from WR to TE in his fourth season, never a good sign.

-The Eagles have seven legitimate starting-level players and two more with those types of traits in the rookie center Jurgens and Opeta. There is amazing talent and depth on this unit which is easily the Eagles’ best.

-Old tropes die hard and while others are worried about whether the Eagles will be a 4-3 or 3-4 team, we will break down the defense how they are taught and the edge rushers (the traditional defensive ends and SAM linebackers) share a room with position coach Jeremiah Washburn.

Reddick is the big addition here and the returning Graham (Achilles) should help this group bounce back as well.

The backup to Reddick will be rookie Kyron Johnson over Patrick Johnson due to special-teams skills with the Eagles hoping to get PJ on the expanded PS.

– This is the most talented unit on the defensive side with the Unicorn-like Davis added to a franchise great in Cox, a Pro Bowl selection in Hargrave, and an emerging talent in Williams.

The dropoff from Williams to the next in line (Marton Tuipuloto?) is pretty steep. The Eagles will try to keep undrafted rookie Noah Ellliss on the PS as the big-bodied backup to Davis.

– This is the deepest group of linebackers the Eagles have had in years. The big additions are White in free agency and Dean in the draft to mix in with Edwards.

Don’t sleep on Taylor either, a raw player who seemed to be catching on last season before a knee injury derailed things. Bradley, meanwhile, was the Eagles’ best special teams player last season.

– The Eagles have an impressive starting trio and McPhearson is one of a cast of thousands (OK, 12) who can rest somewhat comfortably. From there the Eagles will pick and choose between some experience (Jimmy Moreland or Josiah Scott) and a ton of youth.

It should be a true meritocracy but the Eagle slike the traits of Gowan on the outside and Vincent in the slot so we will default there.

– The weakest part of the Eagles team also might be the most concrete with little thought than anyone else here right now could challenge a group with two veteran Band-Aids in Harris and Tartt and two younger players with somewhat limited ceilings in Epps and Wallace.

– The Eagles helped us here by bringing in no competition for Siposs.