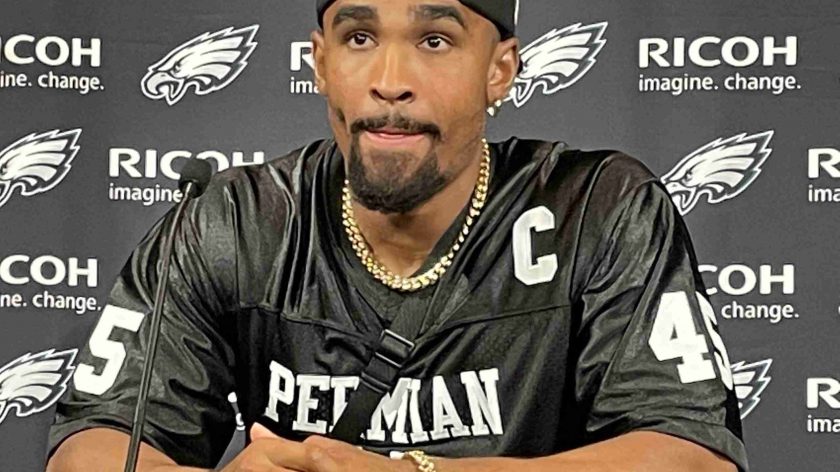 PHILADELPHIA – The hit was so bad even Jets coach Robert Saleh called it “egregiously awful” after New York’s 24-21 preseason comeback win over the Eagles on Friday night.

Jets linebacker Quincy Williams belted Eagles quarterback Jalen Hurts well out of bounds in a penalty so obvious it had Nick Sirianni screaming at a friend, and the Philadelphia offensive line ready to throw down to protect its on-field leader.

Quincy Williams with a late hit on Jalen Hurts 😳
pic.twitter.com/Zwx1crjDsm

The only one cooler than the other side of the pillow was Hurts himself, who simply popped up and wanted to get onto the next play after a drive was extended with a 15-yard flag.

“It happens,” Hurts said after the game. “I’ll let y’all say whatever. He hit me late. They called a flag. We moved on.”

Not before Sirianni made all the lip-readers in the television audience blush, however, with an expletive-filled rant aimed at the opposing sideline.

“I wasn’t mad at coach Saleh. I was mad at the situation,” Sirianni told JAKIB Sports. “I was more mad at the player than coach Saleh. Coach Saleh is a great guy. I have so much respect for him. It was just emotions of the game. I was just sticking up for Jalen. I’ll never apologize for sticking up for my players. I should have handled it a little bit better than I did.”

Hurts wasn’t surprised over the outpouring of support.

The talk of Hurts being a natural leader who most gravitate toward isn’t lip service.

“He’s our quarterback, right?” Sirianni said. “I spend more time with him than any other player in meetings, talking to him after meetings, everything. He’s the one guy that my son and I have a handshake, and the same handshake is done with Jalen, and my son and Jalen are doing it now as well.

Part of the loyalty stems from Hurts’ way of doing business, highlighted by the fact the QB was hardly taking the personal foul as seriously as everyone else seemed to be.

“I’m very pleased to be talking about the hit if this is the biggest takeaway from the night,” Hurts deadpanned sarcastically after compiling a perfect 158.3 passer rating in a cameo appearance. “You definitely don’t want to come out here in these games and take hits, let alone a late hit like that. But it happens. I’m not tripping about it. It happens.

“I’m healthy. I’m fine. I got right back up and played the next play.”

Worrying about what might have happened isn’t Hurts’ style.

Meanwhile, Saleh was doing damage control in his own locker room.

“I talked to [Williams] after the game,” Saleh said. “Egregiously awful from Quincy, and he knows that – he knows better. And those are the plays that Quincy has to get out of his game if he wants to become the linebacker that I think he can be, that we all think he can be. It’s one thing to make a mistake in the game, it’s another thing to make a mistake that leads to points, touchdowns.”

Ironically, Saleh’s own QB, Zach Wilson, did get hurt in a non-contact situation in which the second-year play cut back awkwardly, injuring his knee. Fears of a torn ACL were unfounded but Wilson is expected to miss 2-to-4 weeks with a bone bruise and meniscus damage.

As for the Eagles, the heat of the moment passed and Sirianni noted the business of football marches on.

“We won’t ever be scared to do something,” the coach said. “You’re going to get hit. He got hit late out of bounds. Well, what’s stopping somebody hitting him in the pocket?