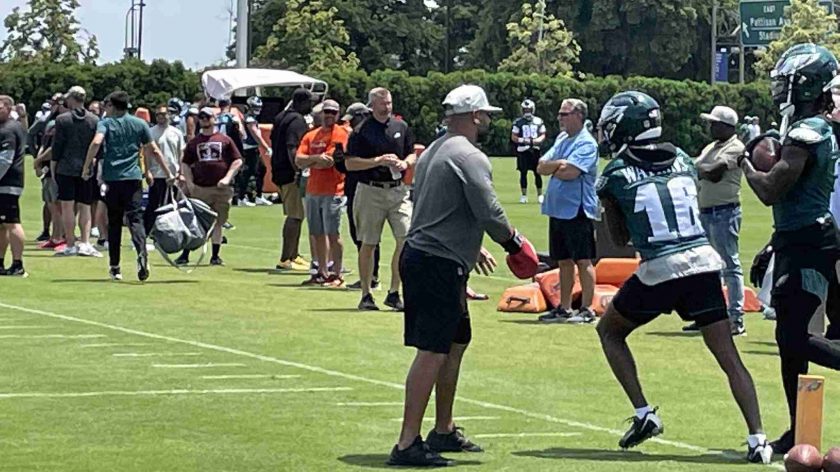 PHILADELPHIA – Jalen Hurts continued to impress Wednesday at the NovaCare Complex with consecutive highlight-reel throws in 7-on-7 work to speedsters John Hightower and Quez Watkins.

Both 2020 draft picks with sub-4.4 speed the WR duo got extra reps with star receivers A.J. Brown and DeVonta Smith sitting out the voluntary session.

The Eagles’ started the period in 12 personnel with tight ends Dallas Goedert and Jack Stoll complementing Watkins and veteran Zach Pascal outside. When Philadelphia went to 11 personnel, Greg Ward joined the party but it was Hightower that had the offensive players exploded when he raced past Avonte Maddox and hauled in a nice Hurts throw before the safety help of Anthony Harris arrived.

On the very next play, Watkins ran by James Bradberry on a go-route, and Hurts had plenty of room for error.

Other offensive highlights included Jason Huntley giving Davion Taylor fits out of the backfield with his speed, first getting by the linebacker on a wheel route and then racing by him on a simple throw in the flat.

J.J. Arcega-Whiteside also snared a Gardner Minshew pass over the middle, perhaps a seminal development in his transition to tight end.

Overall the defense played well, however, often locking down and jumping routes without the big-play ability of. Brown and Smith on-hand.

There were pass breakups by LB Kyzir White, Harris, and cornerback Kary Vincent, Jr. with White’s serving s the highlight when he deflected a Minshew attempt to Britain Covey up in the air before Taylor intercepted it.

Reporters also got the first look at the punting game where K’Von Wallace and Huntley were given the first crack at being Arryn Siposs’ personal protector and a host of players getting reps on punt returns without Jalen Reagor available, players like Ward, Covey, Boston Scott, Watkins, Kenny Gainwell and Maddox.

-John McMullen covers the Eagles and the NFL for JAKIB Media.