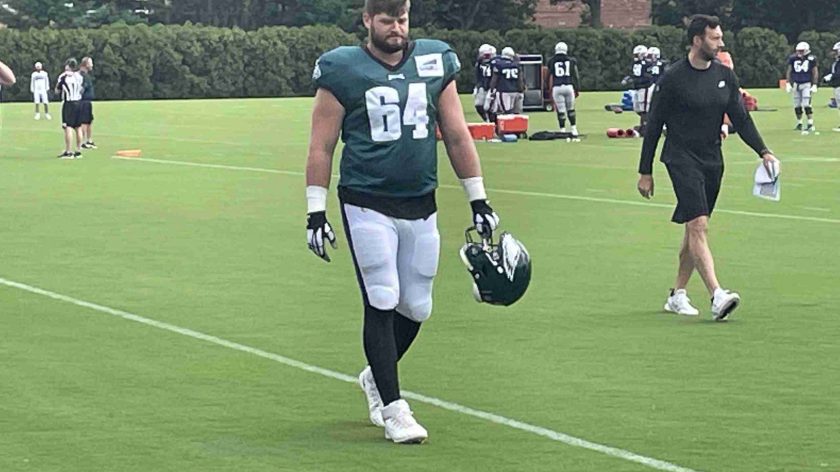 PHILADELPHIA – While it should come as no surprise, the two Eagles players that suffered torn ACLs in the Week 18 regular-season finale against Dallas — tight end Tyree Jackson and offensive lineman Brett Toth — will not be ready for the start of training camp later this month.

According to Jimmy Kempski of PhillyVoice.com, each player will begin their summer on the Physically Unable to Perform list and be unable to practice.

Jackson was seen off to the side and doing some light work at the two OTA sessions open to the media this spring and Toth was at the latter after missing the first practice to get married.

The PUP designation is largely a procedural move and allows the PUP list to come into play for the start of the regular season if needed. To be eligible for regular-season PUP, you must start training camp on the list.

PUP serves as a valuable tool vs. injured reserve because players placed on IR before the cutdown to 53 are not eligible to return for the entire season, meaning the Eagles would have to carry each player on the initial 53-man roster before reverting them to IR if the team planned on using them at any point this season.

If at any point Jackson or Toth are deemed ready for practice this summer or early in the season they can simply be activated off the PUP list up until six weeks into the campaign.

ACL rebabs typically average about a nine-months and each player suffered their injury on Jan. 8. The Eagles’ season-opener is in Detroit on Sept.11, three days after that demarcation line.

If healthy, both Jackson and Toth would be regarded as bubble players with the former still regarded as a developmental project after making the shift from quarterback to TE last year with the Eagles.

For now, the Eagles will be penciling in second-year blocker Jack Stoll and rookie sixth-round pick Grant Calcaterra as top backup options to Dallas Goedert but still like the long-term potential of Jackson.

Toth, meanwhile, is versatile but faces a tough numbers game on a very deep offensive line. A natural tackle, Toth played center in the Week 18 game against the Cowboys after the Jason Kelce cameo that left the All-Pro’s consecutive game streak alive.

In theory, backing up Kelce is not as big as a concern this season with second-round pick Cam Jurgens on board.