Eagles Training Camp Report: Tempers Flare and DeVonta is Back 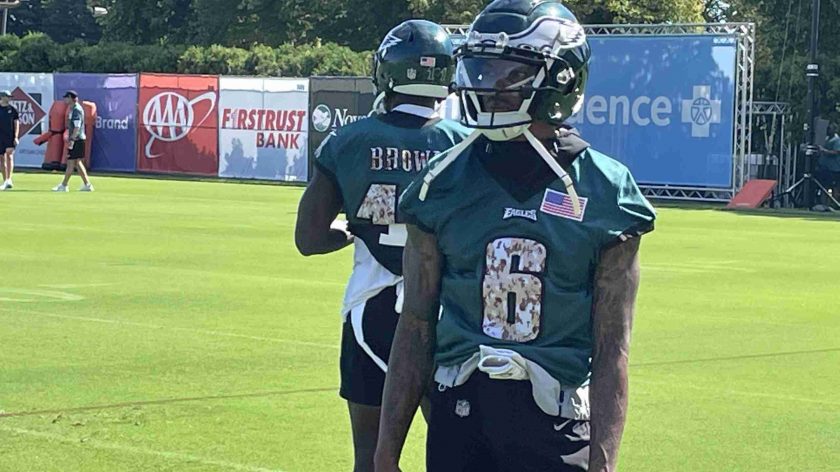 Tempers typically flare at some point during physical football practices in the heat. The Eagles somehow made it through 10 sessions, some reaching near triple digits on the thermometer, without anything boiling over.

That changed on Sunday despite things being a bit cooler at the NovaCare Complex with backup left tackle Andre Dillard being the epicenter of multiple scuffles, first during a one-on-one, pass-rushing drill with defensive end Derek Barnett, and then on a couple of occasions with SAM linebacker Patrick Johnson.

According to reporters on the scene, Dillard got the better of Barnett during a bullrush attempt with the loser of the rep getting chippy afterward, resulting in a bit of a wrestling match before the two were separated.

The bigger scrap came later in a team drill when Dillard, who had already gotten into it with Johnson previously, anchored on a bull rush by the undersized edge rusher. Like Barnett, Johnson pressed the issue after the play and a full-fledged fight broke out with Dillard’s helmet coming off in the fray before things were cooled down.

Dillard recently returned from concussion protocol and did not finish the practice for precautionary reasons.

Nick Sirianni addressed the issues with his team after the 90-minute practice.

On the field, the Eagles got back two of their playmakers in receiver DeVonta Smith, who missed five practices, and the preseason opener with a groin injury and running back Kenny Gainwell, who returned from a hip injury. Cornerback Jimmy Moreland (ankle) and receiver John Hightower (groin) also were back after missing some time while safety Jaquiski Tartt returned after missing a few practices and the preseason game due to a personal issue.

From a performance standpoint, Jalen Hurts was inconsistent throwing the football but did hit Smith and Quez Watkins for big gains down the field with Zech McPhearson being victimized in both cases, the former when he and Avonte Maddox had a miscommunication and the latter when safety help was late arriving.

The top linebackers — T.J. Edwards, Kyzir White, and Taylor — were the story on defense.

Edwards welcomed Smith back to practice with a big hit in the middle of the field while White had a PBU on Gainwell, although it was more likely a strip of the football and fumble if there was video review. Taylor, meanwhile, generated a turnover in 7-on-7 work.

The defense also dominated a backed-up period with Brandon Graham generating a safety.

-Before practice, the Eagles’ got started on the cut from 90 to 85 by waiving a pair of undrafted rookies in OT William Dunkle and SAM LB Ali Fayad. Philadelphia must be at 85 by 4 p.m. on Tuesday.

-Former Eagles Brandon Brooks, who retired this offseason, and Darren Sproles were on hand as was 76ers president of basketball operations Daryl Morey.

-The Eagles have one more training-camp practice in South Philadelphia on Tuesday morning and will then travel to Berea, Ohio, for joint practices against the Cleveland Browns on Thursday and Friday in advance of Sunday’s preseason game between the two foes.