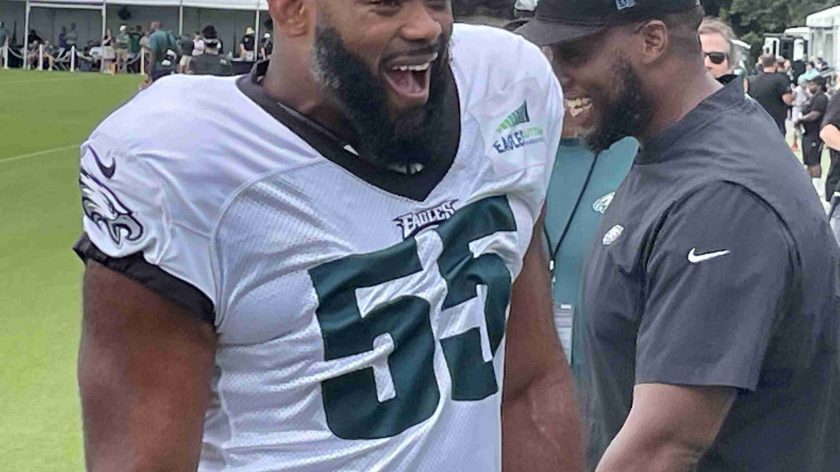 PHILADELPHIA – Nick Sirianni mentioned the natural ebb and flow of training camp the last time we spoke to reporters and Saturday was an example of that as the offense bounced back a bit during Saturday’s “yellow practice” which went about 90 minutes in the South Philadelphia heat.

The offense had struggled mightily at the last open practice on Thursday, something tied to the absence of the top two left tackles, Jordan Mailata (concussion) and Andre Dillard (concussion), as well as receiver DeVonta Smith (groin),

None of those key contributors were back Saturday but the offense seemed to settle down a bit and adjust better. Veteran Le’Raven Clark handled the first-team reps at LT in a more serviceable way and the second-team work was handled by undrafted rookie Josh Sills of Oklahoma State, who acquitted himself a little better than second-year man Kayode Awosika on Thursday.

Added to the injury list was RB Boston Scott, who missed the session with a concussion which may have been related to a big hit at the hands of Marcus Epps earlier in the week.

Rookie TE Grant Calcaterra (hamstring) and Greg Ward (toe) remained on the sidelines as well. Returning were CB Mac McCain, who participated in a limited fashion after missing a couple of practices with a knee injury, and WR Zach Pascal, who participated in team drills for the first time this summer after a nasty bout of food poisoning.

After practice, Pascal noted that he lost 16 pounds during the ordeal.

On the field, Jalen Hurts made some headway in team drills by throwing the football in the middle of the field successfully, a positive step. The QB1 hit TE Dallas Goedert in stride on a sean route and quickly followed that by connecting with a streaking A.J. Brown on a crossing route before the big WR used a couple of stiff arms to fend off Kary Vincent, Jr. for some YAC.

Brown’s size is an issue for cornerbacks after the catch and that is showing up on a daily basis now.

The defense by no means played poorly today either. The unit just didn’t dominate as was the case on Thursday. The play of the day from Jonathan Gannon’s end came in 7-on-7s when Hurts underthrew Quez Watkins a bit down the right sideline, allowing Darius Slay to raise up and make an acrobatic interception.

Slay was also in some fireworks in one-on-ones when Brown tried to Randy Moss the Pro Bowl CB with the so-called late hands to try to hide when the football was arriving but Brown failed to haul it in.

-LB Kyzir White made an exceptional play early in team drills when he sniffed out a screen for a loss.

-Defensive back Josiah Scott continued to get some second-team reps at safety opposite K’Von Wallace while also working in the slot at times behind Avonte Maddox.

-Camp star James Bradberry was about to tally up another positive play with a PBU off a Gardner Minshew throw before Deon Cain adjusted and hauled the pass in any way. Cain has been the best of Philadelphia’s second-tier receivers but missed on a chance to make a splash in 7-on-7 red zone work when he couldn’t corral a well-thrown Minshew pass with Andre Chachere in coverage. On teh very next play, it looked like Cain has a TD on a post route before undrafted rookie Josh Jobe recovered with a last-second PBU.

-Jobe has a nice day overall, also taking away a potential acrobatic catch from Jalen Reagor in which the receiver lost his helmet. Jobse, though, wouldn’t give up and kept clawing at the football and it came out.

-The Eagles tried a look today with Brandon Graham handling some 4i work inside and Milton Williams was outside as an edge rusher.

-There was bad exchange at the mesh point between Hurts and Miles Sanders at one point, resulting in a fumble that the QB was able to get back.

-With all the WR issues, undrafted slot option Britain Covey got some first-team reps.

-The special teams work today placed a heavy emphasis on downing potential punts and everyone from starting players to the likely gunners got reps just in case.

-Zech McPhearson has an excellent rep as a gunner with two blockers trying to force him out of bounds.

-In the developmental period at the end of practice, Carson Strong looked like he got the better of Reid Sinnett for the first time. The latter threw an interception to linebacker JaCoby Stevens while Strong threw a nice pass on a fade route to Keric Wheatfall.

Let’s give it to Brown, who continues to impress with his imposing physical gifts.

The kicker was he was playing official as well throwing his towel on the field when he thought Jobe would have been flagged for pass interference. The official on hand disagreed and went to the impartial judge, which happened to be me because I was standing right there. “Clean play,” I said to A.J.

You have to be objective.