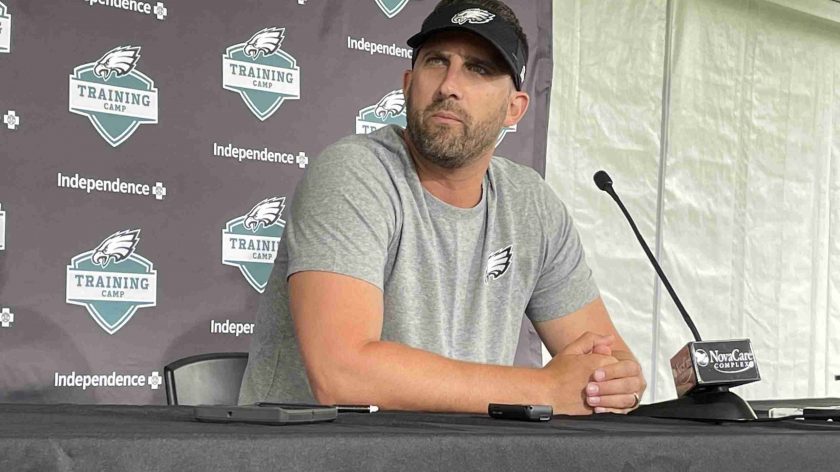 PHILADELPHIA – The Eagles were in shells for the first time this summer as the calendar flipped to August for a 75-minute practice session under overcast skies in South Philadelphia.

Prior to the practice, head coach Nick Sirianni claimed his offense was performing well despite two consecutive perceived lackluster practices last week, although he did say that he would like to see the turnovers muted.

“I think that it looks pretty good right now,” Sirianni said of his offense. “We’re going to the right place with the football, we have guys making contested catches. Would you want to eliminate a couple of the turnovers? Absolutely. There’s a couple too many turnovers in there.

“That’s where my biggest concern is.”

Jalen Hurts had thrown an interception in each of the first three practices of training camp and did manage to eliminate that on Monday but the offense again struggled to get the ball downfield in any meaningful way for the third straight session.

Hurts was relatively nondescript on Monday, completing all by two passes but most underneath. His lone shot play, an over-the-shoulder fade to A.J. Brown was missed badly and the two friends were seen discussing the play and what went wrong.

Today’s turnovers were from Gardner Minshew, the first a diving interception by Shaun Bradley after undercutting a drag route before Darius Slay turned a throw to Jalen Reagor into a tip drill with Marcus Epps’ making the interception, his second of camp.

Miles Sanders has a nice day rushing the football and made sure to finish just about every run by making the extra effort to get to the end zone, a chip on his shoulder that is developing when reporters started to notice the first-team reps were being rotated between Sanders, Kenny Gainwell and Boston Scott.

Sanders even pointed to somebody along the sideline, where reporters stood, after finishing one play in the end zone. It is, however, a statement of fact that Sanders is now sharing first-team reps.

The cleaner day for Hurts was a positive development but there were still some issues with decision-making, especially during some 7-on-7 drills in which the ball was not out on time on a couple of occasions.

Sirianni explained that decision-making was at the crux of two of Hurts’ interceptions earlier in camp.

Hurts has not had a passing TD in camp since the first open practice which was heavy on red-zone work.

Sirianni, though, seems non-plussed, noting that spacing and play discipline is ahead of where it was at this time last year.

“But with that being said, you’re always working to get better at this time. Right now, I’m pleased because like I said, the timing of the quarterbacks, the contested catches by the receivers, and you know what, the defense is making us work to get everything we can get because they look good right now, too.”

“We’ll play him conservative as far as his recovery so we don’t have a setback there,” said Sirianni. “He was having a good camp and making some plays. He’s got pretty good instincts. We’ll look forward to getting him back.”

-Along with Calcaterra, Zach Pascal missed the session as he continues to work back from a case of food poisoning. Defensive lineman Milton Williams (elbow) was back in a limited fashion after missing Saturday’s practice while receiver Keric Wheatfall was also limited in his return from a bout with COVID.

-Davion Taylor has started to mix in with Kyzir White, opposite T.J. Edwards in the 5-2 looks. Rookie Nakobe Dean was mostly on the third team with Bradley getting most of the second-team work with Taylor.

-Rookie center Cam Jurgens got some notice for stoning first-round pick Jordan Davis on a bull rush during a one-on-one drill. Davis noted the coaches want him to learn everything from 4i-technique down to the nose and developing a better bull rush is part of the plan.

-The Eagles continue to throw out some interesting looks in 5-2 overhangs in which two edge rushers are to one side.

-Some of the gunners in punt coverage were Allen, Tay Gowan, Deon Cain, Mac McCain, and Jimmy Moreland.

-Cain has been the best of the Eagles’ second-tier receivers.

-In the developmental period, undrafted rookie QB Carson Strong continued to struggle with INTs thrown to Christian Elliss and JaCoby Stevens. Reid Sinnett seems to be the clear leader for the developmental role