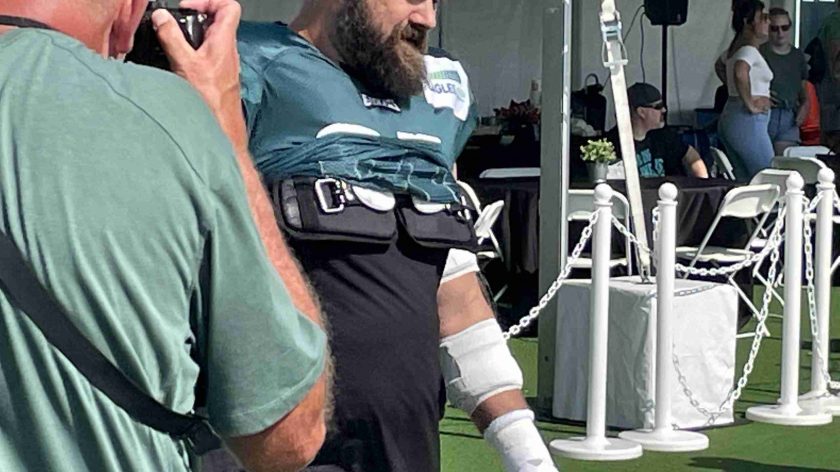 PHILADELPHIA – The biggest news at a steamy NovaCare Complex on Tuesday came off the field when it was revealed that veteran center Jason Kelce will be undergoing a procedure to help his troublesome elbow with an eye on the season-opener Sept. 11 in Detroit.

The team described the path forward as a “routine cleanout” after trying to work through some discomfort. The Eagles’ medical staff and Kelce agreed that arthroscopic surgery was in his best interest and would also allow for a speedy recovery.

Kelce is in the midst of a 122-game consecutive starting streak that dates back to 2014 with the Lions game 33 days away. The timing is key because the typical timeframe for that type of surgery is 4 to 6 weeks.

Kelce, though, is known for his toughness so it would be an upset if he didn’t play in Detroit. While all surgeries are different former Falcons receiver Roddy White underwent arthroscopic elbow surgery in late August before the 2015 season and was able to return for the opener that season against Philadelphia on Sept. 14.

Philadelphia also has a number of other players capable of playing the position but will want starting guards Landon Dickerson and Isaac Seumalo to stay put.
Second-year player Jack Anderson and the recently-signed Cameron Tom will hold down the fort for the preseason behind Jurgens.

Brett Toth, who can also play center, remains on the PUP list after tearing his ACL in Week 18 of last season and could be back in the mix sometime in late August or early September.

The Eagles’ preseason opener is Friday against the New York Jets.

An oppressive heat greeted the Eagles Tuesday with a quick straw poll of the reporters in attendance nearly unanimous in claiming this session as the hottest of the summer despite being moved up an hour to try to beat the temperatures at least a little bit.

The team went just over 90 minutes in a “yellow practice” with four team periods with more evenly proportioned reps perhaps to keep the players a little fresher but there was some sloppiness tied to the thermometer.

I’m calling it. Most oppressive day yet at #Eaglescamp. Went just over 90 minutes in a “yellow” practice. pic.twitter.com/eNBU84o3LC

“It’s not an excuse to make mistakes or let our play fall because there’s going to be a game in the fourth quarter we have to win when it’s hot out and days like this help us prepare for that,” backup right tackle Jack Driscoll said.

The team’s top two left tackles — Jordan Mailata and Andre Dillard — returned in a limited fashion from concussions but did not partake in team work.

Andre Dillard is back. #Eagles pic.twitter.com/QyFRQWdcMu

The competitive period started with the offense backed up and Jalen Hurts was able to connect with A.J. Brown and Dallas Goedert for first downs in what would have allowed the team to flip the field a little better in a game environment.

Defensively, speedy LB Davion Taylor continues to build on what has been a solid summer, recording a PBU in coverage against Brown, chasing down Jason Huntley on the second level, and snaring an interception off a K’Von Wallace deflection of a Gardner Minshew pass.

Minshew threw consecutive picks in a 7-on-7 drill, the first to Taylor and the next to Josiah Scott but that one was hardly the QB’s fault as a good throw was bumbled by Quez Watkins resulting in the turnover.

In special teams work that ended the session, Huntley and Britain Covey were getting the reps at kick returner with Jalen Reagor expected to see plenty of action at receiver in Friday’s preseason opener.

“I like to tell [Huntley] fast guys have to play fast and he’s definitely a fast guy and he’s playing that way,” RB Coach Jemal Singleton said. “I think the biggest thing for Jason and I told him this as well, he’s matured a little bit. He’s starting to understand it.”