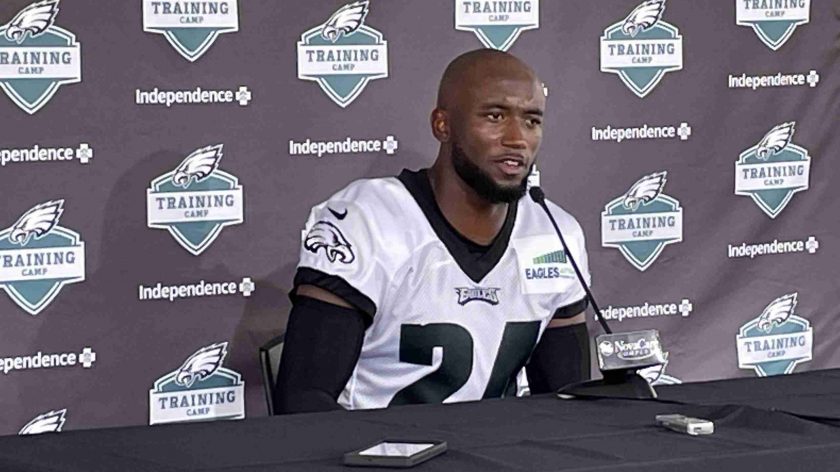 PHILADELPHIA – For a second consecutive day the Eagles’ defense proved to be ahead of the offense early this summer, this time in a 90-minute practice highlighted by a competitive third-down period in which Jonathan Gannon’s first-team defense shut down Jalen Hurts and the offense to “win,” per the scorecard of head coach Nick Sirianni.

The big plays for the stop unit were Javon Hargrave sniffing out a read-option to record a tackle for loss on Hurts on a 3rd-and-3 conversion, followed by the savvy T.J. Edwards undercutting a route for a PBU on 3rd-and-5 and finally lock down by James Bradberry on DeVonta Smith down the field with Anthony Harris also charging in with double coverage on a 3rd-and-7 call.

The offense stayed competitive in the period thanks to Gardner Minshew in the second-team drills. The veteran backup converted a couple of pass plays in which Minshew stayed calm in the pocket and delivered nice touch passes over the middle to backup tight ends Noah Togiai and Grant Calcaterra, the latter of which saw Calcaterra come down reaching for the back of his left leg.

The rookie slowly walked off the field from there.

Minshew doesn’t have the arm to fit the football in tight windows but he does have a knack when it comes to anticipatory throws.

The star of the practice as a whole was Bradberry, who was able to blanket star receiver A.J. Brown in individual drills and brought that same type of lockdown coverage into team work, sticking to Smith in the aforementioned third-down period.

Most of the splash plays on Saturday morning were from the defense with safety Andre Chachere snaring an interception for the second straight day, an ill-timed toss from Hurts, who was drifting outside the pocket to his left and threw across his body toward the middle of the field. presumably to Dallas Goedert.

Taylor continues his excellent early training camp as well and has been around the football consistently.

The highlight of the day for the offense might have been the first play of team drills when Miles Sanders broke one, a day after many were questioning why the Eagles had the RB1 doing some second-team work on Friday.

Head coach Nick Sirianni claimed “Miles is our guy” pre-practice and had some fun with reporters after the big play screaming that Sanders was with the first team and is the starter.

“Who made that article? It is what it is.” Sanders said after practice. “If you’re really watching you’ll see that everybody rotates.

There were also some positive plays for the offense wne the effort was certainly better than Friday with some nice catches from Brown and Smith but there was nothing really eye-popping other than the Sanders run.

-Along with Bradberry, backup nickel corner Josiah Scott excelled in one-on-one work against the receivers.

-Veteran CB Jimmy Moreland hasn’t been noticed until today when he locked down undrafted rookie Britain Covey on coverage with a PBU.

-From a special teams perspective, the Eagles were working on kick returns with Jason Huntley, Devon Allen, John Hightower, and Covey getting reps. The first-team up-backs to block were Boston Scott and Jack Stoll. Other pairings there were Kenny Gainwell and Togiai, Lance Lenoir and Calcaterra, and Kennedy Brooks and Jaedan Graham.

“Understanding your value and your worth is important and I know [the return game is] a big reason why I was brought in here so that’s a big thing that I’m focusing on,” Covey said. “I got my start in the return game as a freshman at Utah by simply catching everything and everything after that came after, right? So that’s what I’m focusing on now is catching every single ball to the point where the coaches can trust me enough to where they can put me out there.”

-John Hightower grabbed his midsection after reaching for a ball during drills and was down for a bit but was able to collect himself and finish the practice,

-Zach Pascal (illness) and Keric Wheatfall (COVID progression) were on the sidelines but still not practicing. Defensive lineman Milton Williams also missed the practice with an elbow injury.