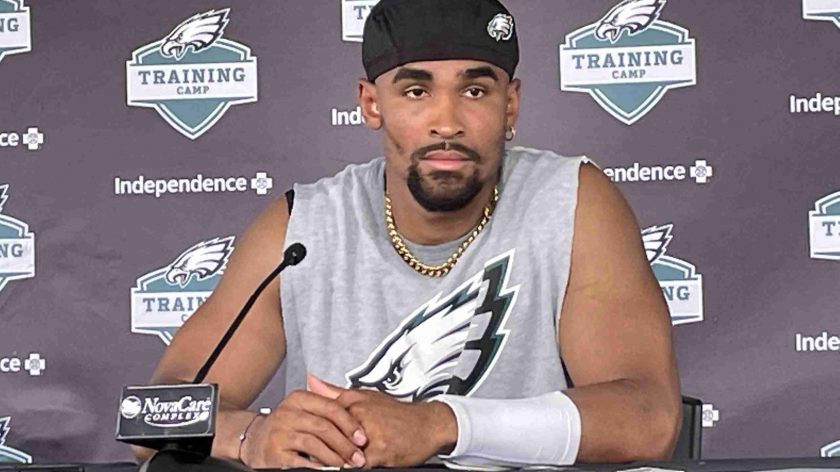 PHILADELPHIA – The temperature surged into the 90s in South Philadelphia on Tuesday so everyone gathered at the NovaCare Complex was warm.

Jalen Hurt, however, was hot, red hot in fact, after struggling for the first week of training camp, for the Eagles’ first padded practice of the year.

The first indication that Hurts was feeling it came during one-on-one drills between the receivers and the defensive backs when the second-year starter victimized James Bradberry, Avonte Maddox, and Darius Slay, the talented cornerback trip that had dominated to date, on consecutive reps.

DeVonta Smith generated a little separation from Bradberry on a go-route when Hurts his second-year WR in stride. From there, the speedy Quez Watkins shook Maddox from the slot for a big-gainer and the most impressive throw of all was Hurts placing it in the bucket for A.J. Brown to get the best of Saly.

The real highlight came in team drills, however, when Hurts duplicated his throw to Smith in individual work, this time to Jalen Reagor with Zech McPhearson in tight coverage and Andre Chachere bearing down to help.

The overall performance by Hurts was certainly worthy of JAKIB SPORTS’ practice game ball for the day.

The embattled Reagor took advantage of rare first-team reps this summer afforded to him after Watkins was forced to leave the practice early with an illness.

“I think he’s growing,” Hurts said of Reagor after practice. “I think he’s working. He’s put his head down and he’s going to work. You see him making plays out there today. So just a constant effort, a constant, conscious effort to listen, lock in and do what he needs to do. I think he’s doing it.”

Watkins did return to watch the final minutes of practice but backup left tackle Andre Dillard did not finish the session with an undisclosed injury.

While the defense didn’t dominate on Tuesday, they also didn’t exactly have a bad day either.

Bradberry, who has been one of the best players in camp, absolutely stoned Smith in press coverage at the line of scrimmage on one rep, not even allowing the talented receiver to get into his route.

The second- third-team defenses also imposed their will on the offense in goal-line work, halting Kenny Gainwell on a couple of runs, and finishing the period with a Tarron Jackson sack.

-Former Las Vegas GM and Philly-area native Mike Mayock was at practice and was pictured catching up with offensive coordinator Shane Steichen before practice.

-Rookie TE Grant Calcaterra (hamstring), WR Zach Pascal (illness), Greg Ward (toe), and Mac McCain (knee) did not practice. Ward and McCain were new additions to the injury report. Ward and Pascal were able to watch practice, however. Kary Vincent and Tay Gowan got some second-team reps at CB in McCain’s absence.

-With the pads on, the OL and DL again had some one-on-work with the main event being veteran Jason Kelce using technique and savvy to shut down star rookie Jordan Davis. RG Isaac Seumalo is also having an exceptional camp while returning from a Lisfranc injury.

-McPhearson bounced back with a near interception of a deep ball to John Hightower but was ruled out of bounds. Gowan has the lone interception of the day off a Gardner Minshew throw but was also called for DPI on two occasions.

-Nakobe Dean got a few first-team reps late in practice but is still running behind T.J. Edwards, Kyzir White, and Davion Taylor.