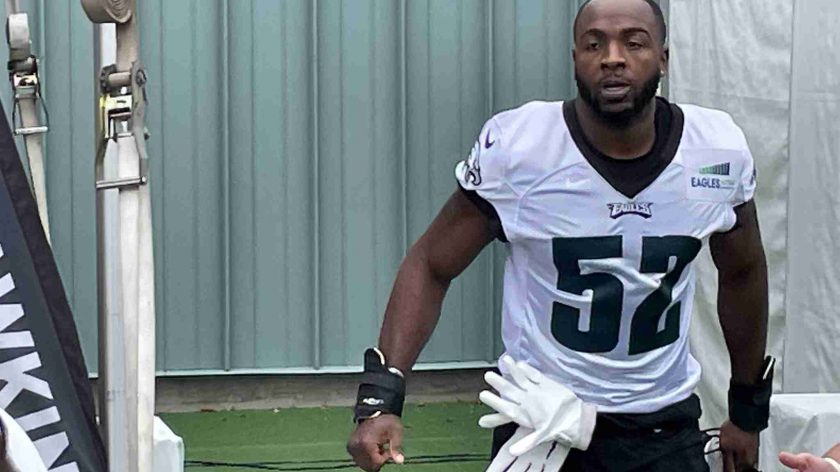 PHILADELPHIA – The defense is supposed to be ahead of the offense early in training camp and that proved to be true Friday at the NovaCare Complex when Jonathan Gannon’s unit stymied Jalen Hurts and Co. to the tune of three interceptions and a stifling presence that put the screws on any potential splash plays.

Hurts was picked after he was baited into trying to fit the football in a tight window by slot cornerback Avonte Maddox, who read the out route being run by his good friend and former teammate Dallas Goedert. The 5-foot-9 Maddox showed off his vertical leap while raising up to make the play.

Overall Hurts was inaccurate for much of the day missing a number of throws, including an air-mailed overthrow to DeVonta Smith in what was a 75-minute “yellow practice” for Philadelphia.

The highlight from an offensive perspective was Hurts rolling right and finding Brown downfield for about 20 yards and a number of solid zone-read decisions in the running game. As a thrower, however, Hurts was about 50 percent on a steamy and overcast morning.

Backup Gardner Minshew turned it over twice, once on a poor throw that fledgling safety Andre Chachere snatched in 7-on-7 work. The other came in team drills when Jalen Reagor stumbled on his route, allowing Mac McCain to get his hands on the football, resulting in a tip drill for Davion Taylor.

The embattled Reagor took a step back as a whole after a good practice on Wednesday. On another occasion, the 2020 first-round pick was blanketed by James Bradberry, who recorded a PBU.

Taylor, conversely, took a major step forward with the INT and another PBU as he tries to carve out a role on the defense.

-Former Denver head coach and resident NFL defensive mastermind Vic Fangio was on hand to watch practice. Many in the NFL, including the Eagles, are planning on using Fangio’s defensive scheme as the foundation for what they want to do on the defensive side.

-Also on hand was former Eagles receivers coach Gunter Brewer, who is now the WR coach at the University of Maryland.

-Rookie linebacker Nakobe Dean was bumped up to some second-team reps opposite Taylor while T.J. Edwards and Kyzir White continued to handle the first-team work there.

-Anthony Harris was back in the mix at safety after slowly ramping up from a recent bout with COVID but K’Von Wallace also got some first-team reps next to K’Von Wallace. Veteran Jaquiski Tartt continues to run with the second team for now.

-In an interesting twist at RB, Kenny Gainwell got some RB1 reps with Miles Sanders taking a step back. It’s been a long time since Sanders wasn’t taking all the first-team reps at RB when healthy.

-At right guard, Isaac Seumalo continues to be spelled bu Sua Opeta with Jack Driscoll handling the work at right tackle behind Lane Johnson. After practice Johnson admitted his troublesome ankle cause some of his anxiety issues last season and perhaps the Eagles are being cautious by making sure Driscoll is ready to go at RT if needed.

-WR Zach Pascal was on the field but missed another day after a bout of food poisoning.

-Both offensive and defensive linemen, as well as linebackers and tight ends are mandated by the NFL to wear guardian caps over their helmets in training camp and both Jason Kelce and Johnson had some fun with the extra protection.

Kelce came out with bubble wrap atop his guardian cap.

“They said the Guardian Caps add 20 percent protection. I figure the bubble wrap gave me another 2 or 3 percent. I’m just adding some more protective layers,” the All-Pro joked.

The shoot-from-the-hip Johnson wasn’t as political with his review.

“I think it’s goofy as [expletive]; look at it,” Johnson said. “You saw Kelce wear the bubble wrap making a mockery of it. They’re trying it out for a couple weeks then I think we’re going to take them off.”

Taylor was around the football all day and showed off his athleticism when given the opportunity.

“I think you see it every single year with him,” Edwards said of his fellow LB. “He came in just trying to know the X’s and O’s of things. He’s obviously just freakishly athletic. Just his comfort level of where he’s at right now, you can tell things are clicking faster. He’s running to the ball, making plays. He had two big plays today so it’s awesome to see. It’s a testament to the work he’s been putting in.”

“He’s the GOAT. Kelce is the GOAT,” Darius Slay during Jason Kelce’s media availability before heading to sign the forehead of a child.