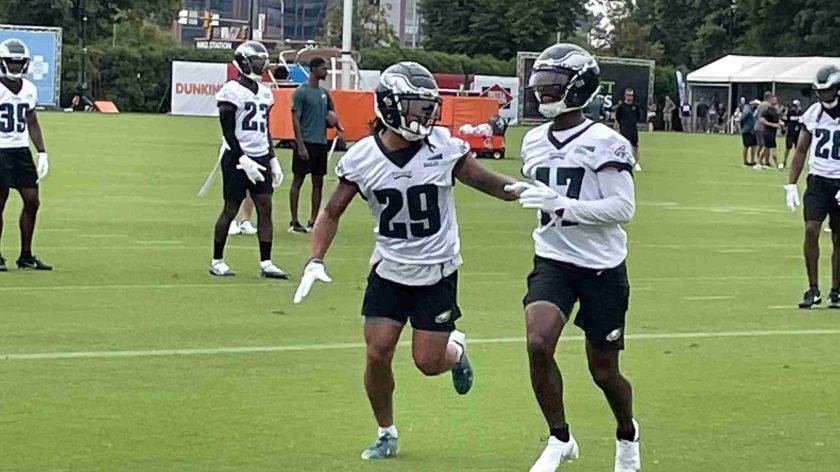 PHILADELPHIA – The final tally was 58 minutes in what the Eagles call a “high-intensity green” practice and to their credit, the first session of the summer did accomplish quite a bit despite the limited time with a heavy focus on red-zone work, both in team and 7-on-7 formats.

The lightest summer on record will continue with a walkthrough practice closed to reporters, before the next full session on Friday.

Head coach Nick Sirianni was asked about the schedule before his team took the field at the NovaCare Complex.

“It’s all about player health, what went down last year, our numbers as far as soft tissue injuries,” Sirianni noted. “So our third day, which (Thursday) would be our third day, they had hard conditioning (Tuesday). They’re going to have an intense practice (Wednesday).

“In our third day, numbers tell us not only on our team, but throughout the league that soft tissue injuries shoot up that day. So that’s the reason for that.”

The Eagles will have a total of four walkthrough breaks before the first preseason game against the New York Jets on Aug. 12.

“Then that is the same data that we’re following for those other three walk-throughs that we’re going to have. Is it different from last year? Yes,” Sirianni explained. “But the other thing you’re getting is more high-volume days because of that walkthrough there.”

“We have a couple more walkthroughs than we had, but there are more green days now, which means there are more high-intensity practices,” the coach said. “So, the distances of how much we’re running at the skill positions, how much we are running at every position, is going to be more in this camp than it was last camp.”

“That doesn’t mean we’re not going to get soft tissue injuries, right? There are probably going to be some. We’re doing as much as we possibly can to prevent those things.”

PLAYS OF THE DAY

When the Eagles actually hit the field, all eyes were on Jalen Hurts and there was good and bad with the second-year signal caller being involved in the plays of the day for both the offense and defense.

The good was a masterful back-shoulder throw during a 7-on-7 red-zone drill. Hurts put the football only where Quez Watkins could catch it with Avonte Maddox draped all over him. Back-shoulder throws are typically used outside the numbers and this throw was with Watkins working from the slot which made it even more impressive.

The bad was a red-zone interception by Marcus Epps, who showed impressive range by breaking on the ball and undercutting Dallas Goedert to make teh splash play. Hurts was late on the throw, however, which was often an issue last season so that will be something to keep an eye on.

Watkins, by the way, had another TD catch in red-zone work when he worked the back of the end zone on a designed Hurts rollout and slipped James Bradberry. The official on the field ruled that Watkins stayed inbounds but it was questionable.

Starting MIKE linebacker T.J. Edwards, fresh off being named the Eagles’ secret superstar by Pro Football Focus, showed off his strength by ripping the football away from A.J. Brown on an underneath route.

Offensively Jalen Reagor excelled while working against second- and third-team cornerbacks and rookie tight end Grant Calcaterra did show a knack for getting open as a receiver, recording two TDs in the session. Reagor also was the top punt returner with Greg Ward, Britain Covey, Watkins, and the newly-signed Lance Lenoir also working in the group.

Miles Sanders juggled the first pass that came his way in camp but did hold onto it and looked to be in tremendous shape.

Kary Vincent Jr. may have had the nicest PBU of the day when rookie QB Carson Strong went to rookie TE Grant Calcaterra on an out route.

Second-round pick Cam Jurgens took first-team reps at center with Jason Kelce taking the day off as he progressed from a bout with COVID. Issac Seumalo started camp on the active list and saw action at RG but Sua Opeta mixed in as Seumalo continues to work his way back from two surgeries for a Lisfranc foot injury.

The other high-profile rookies were started slowly, even No. 13 overall pick Jordan Davis, who started out behind second-year player Marlon Tuipulotu. Third-round linebacker Nakobe Dean started by working with the third team behind T.J. Edwards and Kyzir White as well as Davion Taylor and Shaun Bradley.

The Eagles’ defense started with a lot of 5-2 overhang looks with Haason Reddick and Josh Sweat flipping sides on the edges with three interior players despite Fletcher Cox being limited as he progresses back from COVID.

The only interesting tidbit was K’Von Wallace staring at safety opposite Epps as the replacement for Anthony Harris, who was limited due to, tou guessed it, COVID.

In addition to Kelce, WR Keric Wheatfall missed the practice working his way back from COVID and veteran WR Zach Pascal misses the session due to an illness.

Let’s give it to Epps. Before practice, GM Howie Roseman was really pumping up Epps and the fourth-year pro’s ears must have been burning in an attempt to live up to the hype with a splash play.