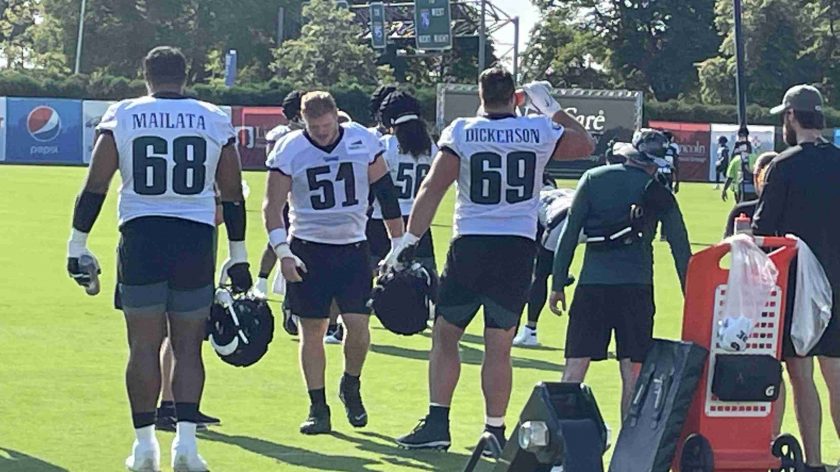 PHILADELPHIA – From the Eagles’ perspective, the hope is that Cam Jurgens’ first foray as the team’s starting center lasts about a month, just in time for Jason Kelce’s return on Sept. 11 in Detroit.

Dubbed as a luxury pick back in April when Philadelphia selected him at No. 51 overall as the 34-year-old Kelce’s heir apparent, observers learned very quickly that today’s luxury can turn into tomorrow’s necessity very quickly.

Kelce’s cleanup elbow surgery announced on Tuesday means the season-opener is in some doubt even if everyone seems to believe Kelce will be in the mOror City for consecutive start No. 123.

“I don’t ever put a timetable on anybody, as you guys know,” Nick Sirianni said when asked about Week 1 for his All-Pro. “We’re hopeful for him. Like I said, how many, 122 games in a row he’s played? Yeah, if he’s close, the track record says that he’s going to be — he’ll be ready to go.”

The silver lining to this is a rookie center will get a significant number of first-team reps over the next 30 days.

“Kelce’s down right now, so I just have to do my best to fill in there,” Jurgens said after Wednesday’s practice. “It’s good for me because I get those extra opportunities, those extra reps. It’s a good opportunity for me.

“I feel like I get more ready every single day. I’m excited and ready to go play some more football and hit someone other than someone on our team. I feel like every day I’m getting better.”

The Eagles will host the New York Jets on Friday night in the preseason opener, and Jurgens will be in the middle of a starting offensive line that is likely to play a series or two, per Sirianni. Because of his experience level, Jurgens may get a little more work than that, however.

So far Jurgens is enjoying the process.

“It’s different here because it’s so much more detail,” Jurgens said. “In college [at Nebraska], they kind of grind your body down. It’s how many reps, how many plays you can get done in a day, how hard you can go. Where here it’s like how hard can you train your mind to do a perfect rep every single time because we’re not doing 100 plays, we’re going to get a certain amount then we go walkthrough, but that intensity and I think the detail is a lot sharper at this level without a doubt.”

During the first nine practices, Jurgens has taken in everything Kelce has to offer.

“Cam’s done a nice job of picking everything up and he’s in Jason’s ear trying to get as much information as he can, learning from the vet.”

The Eagles had a 60-minute high-intensity “green” practice in the heat of South Philadelphia Wednesday morning and it may have been the sharpest session of the summer for the passing game.

As always, A.J. Brown and Dallas Goedert were the main pieces to the passing game but veteran Zach Pascal received a number of targets from both Jalen Hurts and Gardner Minshew while toggling between the first and second teams.

Pascal had a slow start to this camp after losing 16 pounds after a nasty bout with food poisoning but has started to show up and prove to be a reliable target, especially in the absence of DeVonta Smith, who was working on a side field and looking close to a return from a groin injury.

“We’re hopeful here soon with him,” said head coach Nick Sirianni prior to practice. “He’s getting more and more comfortable on it. We sure as heck miss him. We need him out there. We know how good of a football player he is and how important he is to this organization.”

Jalen Hurts started hot in team drills by extending the play, rolling right, and finding Brown for a touchdown. It got a little shakier from there when Darius Slay had a nice PBU on Brown and then Jalen Reagor made a nice toe-tap catch on an out pattern that could have been thrown better.

During 7-on-7s, however, Hurts may have had his sharpest session of the summer with a deep fade to Brown for a TD, a nice throw to Pascal out of a five-wide look for another touchdown, and a solid check down to Quez Watkins when nothing was there.

Pascal also had a deep TD from Gardner Minshew in 7-on-7s.

-LB Christian Elliss came up with an interception after a Minshew pass bounced off Lance Lenoir, another tough turnover that wasn’t necessarily the backup QB’s fault.

-Third-team quarterback Reid Sinnett continues to impress and had a nice connection with Britain Covey out of the slot on Wednesday. Sinnett also got another round with the twos.

-CB Zech McPhearson got a little too physical with Lance Lenior at one point, drawing a DPI flag.

-With only five running backs on the roster the Eagles worked out DeAndre Torrey today and have reportedly agreed to sign him. At 5-foot-7 and 195 pounds, however, Torrey is not the big back some believe the Eagles need.

-On one red-zone play, which looked like a pseudo-RPO, the Eagles’ offense looked confused, and Hurts and right guard Issac Seumalo were talking with offensive coordinator Shane Steichen as they exited the field.

-WR coach Aaron Moorehead said Reagor came into camp in tremendous shape which was not the case before the 2021 season and the embattled WR has had a terrific camp. Today it was the toe-tap catch.

“From two years ago to last year to now, mentally, he’s in such a better space,” Moorehead said. “I think just that transition, having all those targets [in college] to maybe you only get a couple opportunities per game, he had to get used to that adjustment. He’s had a nice camp so far. He’s made plays, he’s done everything we’ve asked him to do and he’s got to continue to challenge himself every day to be great on the field and off the field and to continue to take care of himself.”

-The best grab of the morning, though, belonged to backup TE Noah Togiai, however, a one-handed stab of a Minshew throw.

JAKIB SPORTS PRACTICE GAME BALL: It goes to Pascal, who showed off for the first time why Sirianni believes he’s so reliable.