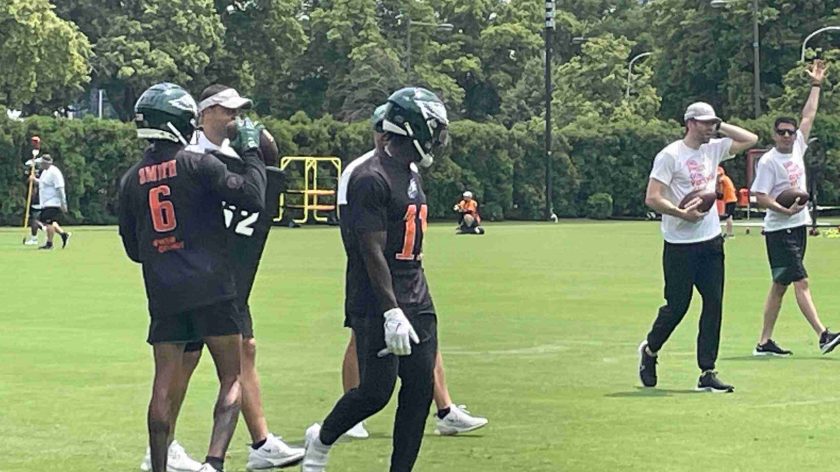 Things can change very quickly in the NFL and that describes the Eagles at wide receiver where the position went from perceived deficiency into a top-five group (per Pro Football Focus) overnight after the draft-day trade that brought A.J. Brown to Philadelphia.

Brown, the talented fourth-year pro acquired for a first-round pick and a whopping $100 million extension, is expected to be the domino that allows everything else to fall into place.

Already a two-time 1,000-yard receiver in his young career which would have been three-for-three if not for injuries, Brown is the type of player the Eagles haven’t had since Terrell Owens, a big (6-foot-1, 226 pounds), physical receiver who can beat opposing cornerbacks a host of ways and is a YAC monster once the football is in his hands.

With Brown, 25, in place and taking up most of the attention and double teams, it should allow Smith to excel against lesser cornerbacks and Watkins, or free-agent pickup Zach Pascal, to see few double teams.

In other words, Smith would have been considered a bottom-half WR1 and Watkins near the bottom of WR2 options when comped to the rest of the league. With Brown, the Eagles have arguably top-10 WR1, but the bigger impact is that turns into one of the better WR2s in the NFL, and Watkins can settle in where he belongs.

The back end of the depth chart starts with disappointing 2020 first-round pick Jalen Reagor, who is no longer a pivotal part of the team’s offensive plan, along with veteran Greg Ward, who is a terrific leader but not a difference-maker from an athletic perspective.

Others trying to catch the eye of the coaching staff include spring star Deon Cain as well as John Hightower, Josh Hammond, and Keric Whitefall, who garnered a 90-man offseason roster spot after a rookie camp tryout in the spring.

The path for undrafted rookie Britain Covey and Olympic hurdler Devon Allen to make the team is likely in the return game on special teams but each must show some competency on offense as well to earn a roster spot.

Plenty with Brown and Pascal being brought in to serve as two of the top four WRs in the offseason, one as the difference-maker and the other as a glue guy who is close to the coach and can be a bridge between Nick Sirianni and the entire WR corps.

The speedy Allen and ultra-quick Covey are probably bigger evaluations for Michael Clay in the return game. As receivers, Allen can run by anyone and stretch the field while Covey is limited to the slot due to size limitations but he’s also extremely quick and tailor-made for that type of role.

The other newcomers are Hammond and Wheatfall, players whose short-term ceiling is a spot on the 16-man practice squad.

Brown and Smith are locked in, to say the least, which makes the WR3 position the most interesting and it figures to be handled in a piecemeal fashion with Watkins on the field when Sirianni and play-caller Shane Steichen want to push the passing game and the 6-foot-2, 215-pound Pascal getting reps when the top-ranked running game is at the top of the call sheet.

Reagor, meanwhile, will also be a daily story as the Eagles try to move on from what has been a disappointing career to date.

Four players are locked in — Brown, Smith, Watkins, and Pascal — with the fifth likely being Ward unless one of the younger receivers steps up and proves worthy. In such a scenario there should be a concern over the lack of athleticism behind the top three WRs but understand the expanded practice squad gives you more freedom to keep younger players by that mechanism.

This assumes the Eagles either move Reagor before Sept. 11. If that’s not accomplished the Eagles will likely default to a third season with Reagor by citing the aforementioned, needing more athleticism behind the starters.