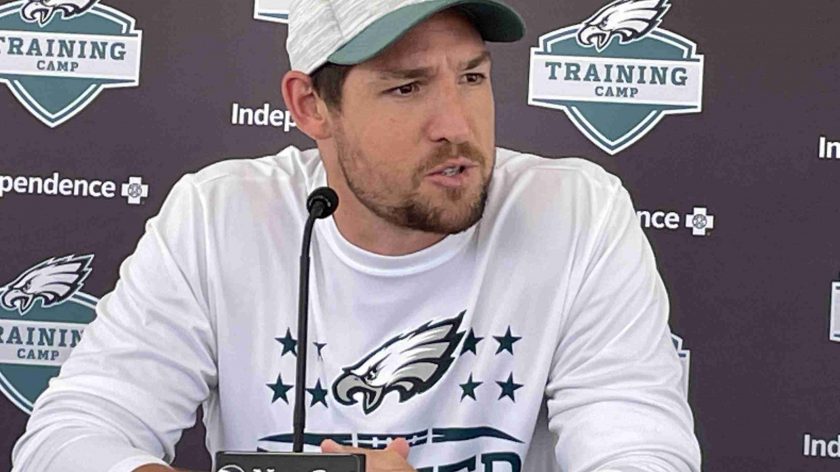 The Eagles will enter training camp with no competition among their specialist group.

That’s shouldn’t be a surprise when it comes to placekicker Jake Elliott, who is coming off a spectacular season, and long snapper Rick Lovato, who remains one of the NFL’s best but it’s curious when discussing punter Arryn Siposs, who faltered badly down the stretch in his first opportunity last season.

The thought process from Philadelphia is that Siposs will be competing with the other punters around the league and if one shakes loose it’s a position where you can make a quick change with few hiccups. And while that part is true it should be noted that Siposs first got on the Eagles’ radar after batting with Detroit Pro Bowl punter Jack Fox on a day-to-day basis in 2020.

More so, Siposs’ predecessor in Philadelphia took off only after first losing a camp battle with Donnie Jones in 2017 so it is at least a little curious why the organization doesn’t believe boots on the ground isn’t the better alternative when it comes to competition.

Embattled 2020 first-round pick Jalen Reagor’s last stand might be the return game where the now third-year player will try to hold off undrafted rookie Britain Covey, a really good punt returner in college at Utah. Greg Ward will also be in that mix especially if ball security becomes an issue.

The biggest threats to Reagor’s job as the kick returner are running backs, Jason Huntley and Boston Scott. The speedy Huntley is the best KR on the roster but needs to prove he can help in other areas to be considered.

Kenny Gainwell is also typically given reps in practice when it comes to both return jobs but his projected role in the offense should trump any significant use as a returner.

The status quo is in place for Michael Clay with the notation of Covey and Huntley potentially making some noise in the return game. The Eagles need to get better there and win more field-position battles but the issue becomes the spot on the 53-man roster. With the return game being devalued the Eagles aren’t just keeping Covey or Huntley on the roster as a pure specialist. They have to offer something else and the depth at receiver and running back may make that difficult.

If the Eagles can get something on the trade market for Reagor they would likely pull that trigger because it seems like both sides understand a change of scenery is best. That said, Philadelphia isn’t just going to cut a first-round pick about to enter his third season so his status will be the major story.

Obviously, Elliott and Lovato are locked in even if the Eagles play the roster game with their long snapper, something that has become a bit of a trend around the NFL. The punting gig is Siposs’ to lose but if the Aussie kicks as he did down the stretch of last season, Philadelphia will certainly be willing to turn the page.

If Reagor is in Detroit on Sept. 11 he will more than likely be the returner in both phases so, in many ways, the prospects of the other candidates will hinge on Howie Roseman’s ability to shop a blemish on his resume.