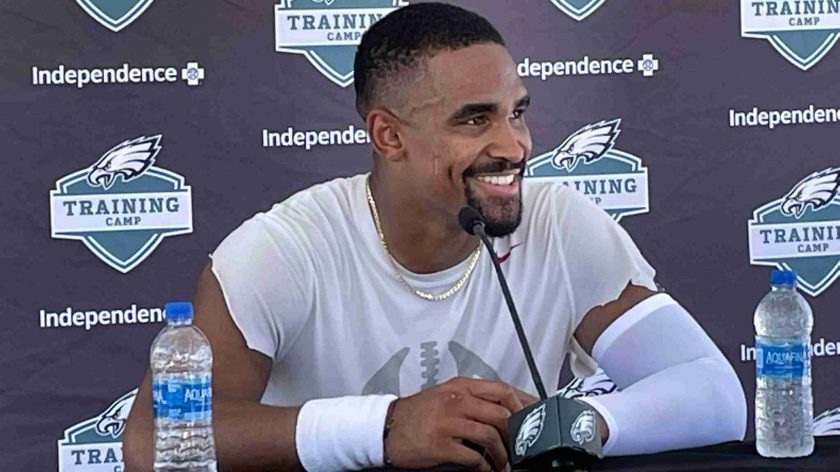 The Eagles’ offense looks good on paper with perhaps the top offensive line in football, two potential difference-makers at receiver, a Pro Bowl-level tight end, and a running back room that might not feature a true bell cow but proved good enough to help Philadelphia lead the NFL in rushing last season.

The final piece to what could be an explosive puzzle is Jalen Hurts, the third-year quarterback who is unique in so many ways.

What Hurts proved last season, his first as the full-time starter with the Eagles is that his floor as a player is pretty significant, good enough for 3,144 passing hards and another 784 on the ground resulting in an unexpected playoff berth for the team and Pro Bowl-alternate staus for the player.

The next step is figuring out if the floor is the ceiling for Hurts. If that’s the case, Philadelphia will have no interest in an extension at the market rate for the QB position in the NFL.

At this time next year, we could be talking about Hurts getting a deal that reaches $40 million in average annual value or how quickly the team can get a first-round pick ramped up to play.

The goal with Hurts isn’t about statistics or benchmarks it’s about improving his accuracy and decision-making.

Nick Sirianni evaluates his QBs in four areas and those are the two most important traits the coach wants, followed by off-schedule ability and arm strength.

The Eagles’ offensive brain trust has obviously already checked the box with Hurts when it comes to his movement skills where his only peer is Lamar Jackson. Hurts’ arm strength isn’t going to remind you of Brett Favre or John Elway but Sirianni and Co. have already assessed that the arm talent Hurts possesses reaches the threshold for NFL success.

The goal in the offseason was to improve Hurts’ mechanics in an effort to help his accuracy while the better processing and decision-making should come from experience, along with the confidence better technique can spawn.

The organization gently nudged Hurts away from his comfort level and pushed him toward mechanics gurus Tom House and Adam Dedeaux in Southern California and the young QB proved malleable enough to accept the plan which is certainly a positive development.

But that’s Hurts in a nutshell. He’s already good and possesses the work ethic to maximize everything at his disposal but is that enough?

The Eagles love the intangibles but just aren’t sure the traits are worth a long-term commitment.

Not Much. After all the talk about Russell Wilson and Deshaun Watson, neither perceived superstar quarterback even considered Philadelphia as a potential landing spot and each had a no-trade clause. Meanwhile, thoughts, that the Eagles might try to flip highly-regarded backup Gardner Minshew while the team still had some leverage proved to be lip service. The only addition to Brian Johnson’s room is undrafted rookie Carson Strong, who would have certainly been a draftable commodity if not for serious knee issues forcing many organizations to put a red flag on the Nevada product.

The Eagles have done a good job making the fan base forget that the goal was to acquire a superstar at the game’s most important position if they could. The path to that never unveiled itself and Philadelphia will run it back with the cost-effective Hurts for another year.

The better spin would be to point out that Wilson is a future Hall of Famer and Watson has that type of ceiling if he can clean up his personal peccadillos. What the Eagles didn’t do was entertain potential slight upgrades or lateral moves to get a better fit for the offense like a Baker Mayfield or Jimmy Garoppolo and that is the better highlighter when trying to sell those outside the NovaCare Complex that the organization really does like and believe in Hurts.

After all, it’s not mutually exclusive to value a player while also acknowledging a generational one would be an upgrade.

Hurts and Minshew are obviously locked in with the latter being one of the top five-or-so backup options in the entire NFL. The bet here is Strong will be the QB 3 if he’s healthy enough to play. Most scouts graded Strong as a potential Day 2 pick thanks to his arm talent and Sinnett, who entered the league as an undrafted free agent of the Tampa Bay Buccaneers in 2020 out of San Diego, just doesn’t have the same kind of upside.