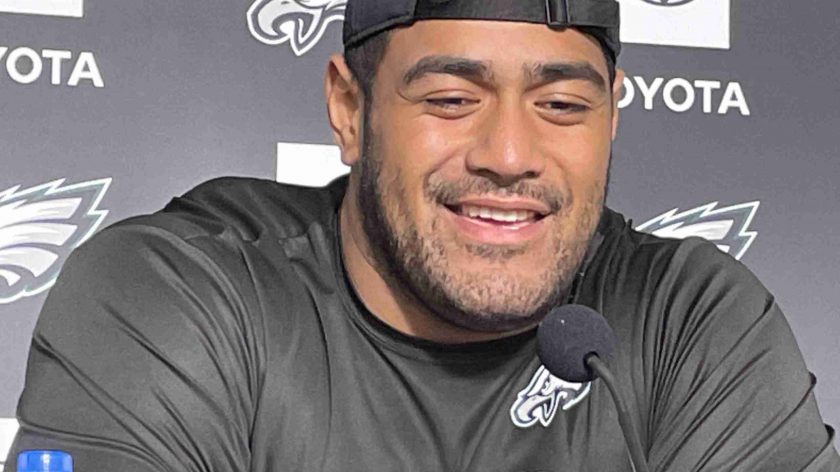 There is usually plenty of debate in the NFL when discussing the top players and position groups.

When it comes to offensive tackle, the Eagles have a pretty good case of having the best tandem in the league now that former New Orleans left tackle Terron Armstead calls Miami home. Credible minds could debate a healthy Armstead and right tackle Ryan Ramczyk against Philadelphia’s Lane Johnson and Jordan Mailata and come to opposite conclusions but with the Saints dup split up, you can confidently label the Eagles as having the best pairing in the entire league.

From there if you add the depth of 2019 first-round pick Andre Dillard and Jack Driscoll, two starting-caliber players as backups, Jeff Stoutland is running circles around the rest of the NFL when it comes to tools at his disposal at OT.

Johnson, 32, is an All-Pro-level talent who was graded out as No. 10 at OT by Pro Football Focus last season despite missing time with anxiety issues. In 416 pass-blocking snaps last season, the Oklahoma product did not allow a sack and he’s now been graded as a top-10 OT five times in his career.

Mailata, meanwhile, was graded as the third-best OT by PFF in his first season as the full-time starter behind only future Hall of Famers Trent Williams and Tyron Smith, an amazing trajectory for a football novice when he arrived from Australia in 2018.

The scary part is that Mailata still has plenty of room to improve, especially in pass protection. At 6-foot-8 and 380 pounds, Mailata is an absolute road-grader when it comes to the running game and the Eagles were wise to lock him up on a four-year, $64 million extension the day before the 2021 season began, a contract that already looks like a bargain.

In an offseason of big time spending, team-friendly deals are all the more beneficial

The Top 32 Contracts in the NFL from the club perspective:https://t.co/jXYvpHhkcp

Once upon a time, Andre Dillard was supposed to be the heir apparent to Jason Peters at LT and while that never panned out, the much-maligned first-rounder quietly turned the corner as a credible option last season when forced into the lineup.

The issue moving forward is that the Eagles had to decline Dillard’s fifth-year option, meaning he will be an unrestricted free agent after the 2022 campaign. Howie Roseman won’t give Dillard away because he remains valuable as a backup, especially after remaking his body in the offseason and getting stronger but he will be starting somewhere else in 2023 so the debate could be get something for Dillard while you still can.

Driscoll is a natural right tackle who slid in and played really well at right guard last season, something that has the Eagles reevaluating his long-term future. It’s conceivable that Driscoll beats out Isaac Seumalo and becomes the starter at RG. If not, Driscoll will serve as a terrific backup inside and out on the right side.

Le’Raven Clark is a veteran swing option with starting experience and the Eagles also like the versatility of Brett Toth, who will start training camp on the PUP list as he continues to rehab from a torn ACL suffered in Week 18 last season.

If it’s not broken don’t fix it. The entire band is back together with the addition of Williams, an undrafted free agent out of Miami vis Houston. Williams started at RT with both schools he attended and would figure more into the mix if Driscoll moves full-time inside as the starter at RG. Until then, he shapes up as a solid developmental prospect on the practice squad.

It will be interesting to monitor Dillard because his future is obviously outside of Philadelphia and when OL-deficient teams start to get a look at how he’s re-made his body, Roseman may start getting some phone calls especially if Dillard shows up in the preseason as well as joint practices with Cleveland and Miami.

The top four (Johnson, Mailata, Dillard, and Driscoll) are set with the only potential curve ball being a potential trade involving Dillard. In that instance, Clark would be next in line. Awosika is also a player Philadelphia likes but should be able to get through to the practice squad.