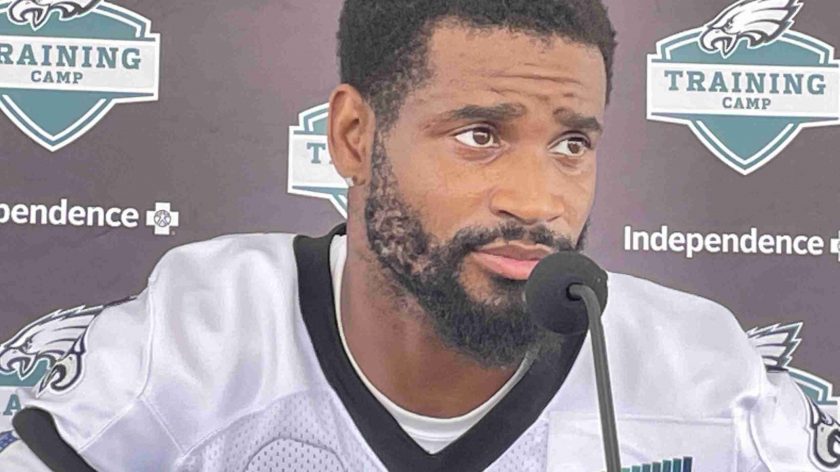 The late addition of James Bradberry gives the Eagles one of the top cornerback trios in the NFL entering the 2022 season.

Darius Slay remains the star and the CB1 while coming off one of his best seasons in 2021 en route to his fourth Pro Bowl.

Slay has shown no signs of slowing down despite the fact he’s 31 and will be entering his 10th NFL season. More concerning than “Father Time” showing up for Slay is the regression-to-the-mean theory in that it will be hard to reproduce the three defensive touchdowns and the lights-out lockdown coverage the veteran provided at times last season.

What won’t change is Slay being one of the best coverage corners in the NFL. He finished third overall in coverage grade in 2021 and allowed less than 30 yards per game when tasked with traveling with the opponent’s best receiver. Slay is also savvy enough to toggle between man and zone coverage rather seamlessly giving defensive coordinator Jonathan Gannon the ability to use multiple coverage concepts at will.

Adding to that sentiment is Bradberry, a one-time Pro Bowl cornerback for the New York Giants, who was released due to salary-cap issues before signing with the Eagles in mid-May on a one-year deal that could reach up to $10 million.

Bradberry, who will turn 29 in early August, had a bit of a down year by his standards for the Giants last season but an NFL source told JAKIB Sports some of that can be traced to an injury that the veteran was fighting through. If that’s the case and the Eagles get the 2020 version of Bradberry the team should be in the conversation for the best outside CB tandem in the NFL.

Bradberry is also a natural zone CB with impressive playmaking instincts when his eyes are on the quarterback, a natural for what Gannon likes to do with his coverages.

The third piece to the puzzle is one of the better slot cornerbacks in the league in Avonte Maddox, who is fresh off a three-year, $22.5 extension after a breakthrough season in 2021.

Maddox arrived in Philadelphia after a stellar career at outside CB in college with Pitt but his size – 5-foot-9 and 184 pounds – comes with some limitations at the pro level and the Eagles drafted him with the intent of moving him inside. It just took a while to make that permanent.

Maddox bounced around the secondary over his first three seasons. He went from free safety and outside corner out of necessity as a rookie in 2018 to the slot in 2019, where he showed tremendous progression, and then back outside for 2020 which was a major step back.

The versatility was much-ballyhooed as a rookie. To be honest, though, Maddox struggled more often than not at safety but persevered and the splashes were good enough that some outside the organization were still talking about moving him to there before veteran Jaquiski Tartt was brought in by the Eagles in mid-June.

That was never even a consideration by the team, however, after how well Maddox played in the slot in 2021, where he spent 659 of his 780 defensive snaps, a career-high 65% of the team’s defensive total.

The depth remains a concern but there are plenty of options with second-year players Zech McPhearson, Tay Gowan, Kary Vincent, Jr., and Mac McCain in the mix.

McPhearson is regarded as the top backup as a 2021 fourth-round pick but Gowan, who was acquired in the Zach Ertz trade, might be the most intriguing because of his length and speed. McCain, meanwhile, is typically an afterthought after bouncing between the Eagles and Denver Broncos practice squads last season but he was ahead of Gowan and Vincent in the spring.

Josiah Scott, a third-year player acquired from Jacksonville in 2020, will likely start camp as Maddox’s backup inside but don’t sleep on Jimmy Moreland, a waiver-wire pickup from Houston that the Eagles have liked since he was in Washington. The slot might be the more natural position for both McPhearson and Vincent as well so there should be plenty of competition.

The Eagles also spent big in undrafted free agency before they were able to secure Bradberry. It’s unlikely that Josh Jobe (Alabama), Mario Goodrich (Clemson), or Josh Blackwell (Duke) make a run at the initial 53 but the practice squad should be stocked well.

The Eagles are 13 deep at CB on the 90-man roster with plenty of new faces. The biggest by far is Bradberry, who should elevate the defense as a whole. The other veteran is Moreland, who the Eagles have liked for a few years now but has flamed out in two different cities. The veteran should have an opportunity to compete inside, however. The rookie undrafted players — Jobe, Goodrich, and Blackwell — all had draftable traits and one of the underreported parts of Howie Roseman’s well-regarded offseason is bringing in younger players with upside if they can get sound and patient coaching over the next two years.

With the starters entrenched, finding capable backups is going to be the most interesting part of the summer. The fact that McCain started ahead of a few players he wasn’t expected to in the spring is a good sign for him as the potential long-shot. You get the feeling, however, that the Eagles really want McPhearson, Gowan, and Vincent to develop into contributors.

If the modern NFL, you would like to keep six on the 53 and you can feel comfortable with the starters (Slay, Bradberry, and Maddox), along with McPhearson being among that group. From there the upside of Gowan is going to be tough to overcome for the other young CBs which would make it a true meritocracy for the final spot. The versatility of McPhearson could make it easier for the Eagles to pick an inside or outside option as well. The expanded 16-man practice squad will also be CB-heavy because the organization has so many young bodies worth developing.