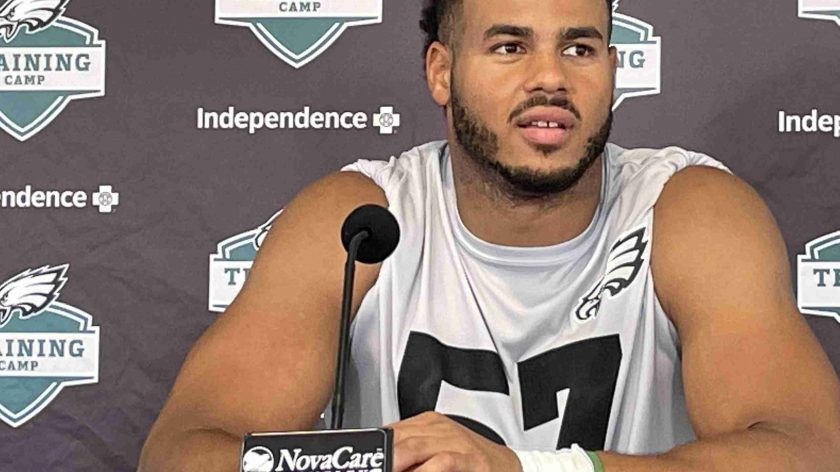 There’s no Fred Warner, Bobby Wagner, or Darius Leonard in Philadelphia right now but there is both competency and upside in a unit with four potential paths linebackers coach Nick Rallis could go down.

The easiest and likely Plan A is T.J. Edwards building upon a breakout 2021 campaign in which the former undrafted free agent may have been the most underrated player on the Eagles and pairing him, more of a traditional downhill thumper, with free-agent acquisition Kyzir White, a modern hybrid player with coverage skills.

That was also clearly the plan leading up to the draft when Georgia star Nakobe Dean fell to the Eagles in the third round.

Many draft analysts projected Dean to be a first-round pick in April although most personnel departments around the NFL had more of a bridge grade on the Butkus Award winner due to some size and athletic deficiencies. The bigger hit to Dean, however, was medical with some teams red-flagging him until later in the process, not so much of a potential short-term issue with a murky pec injury but longer-team questions about potential degenerative conditions in a knee and shoulder.

The Eagles feel they got tremendous potential in Dean and it’s all about how quickly a natural instinctive and high football IQ player can ramp up.

The fourth, and often forgotten, part of the equation is Davion Taylor, the best athlete of the bunch who came into the NFL as a very raw player before things seemed to start clicking for him a bit last season. That was until a knee injury that required surgery shut things down for Taylor after he played in nine games with six starts.

Special teams stalwart Shaun Bradley, a South Jersey native and former Temple star, will also be part of the mix and Christian Elliss is back after spending time on the practice squad last season.

During OTAs, the Eagles started their 7-on-7 work by matching Edwards and White as expected followed by Taylor and Elliss with Dean and 2021 sixth-round pick JaCoby Stevens, who continue to try to transition from safety at LSU to LB at the pro level.

Defensive coordinator Jonathan Gannon also matched on off-ball LB at times with overhang players like Derek Barnett, Patrick Johnson, and Kyron Johnson so that look could be part of the defensive sub-packages as well.

The Eagles added potential significant newcomers in both free agency (White) and the draft (Dean). Ultimately the rookie might be pushing White, who signed a one-year, team-friendly deal, for playing time and the Eagles could try to piecemeal things by using White, a former college safety at West Virginia, as a coverage player and mixing in Dean when stopping the run is paramount.

Edwards, a very smart and instinctive player, is likely going to be the default player for Gannon and Rallis with the questions being the player surrounding the satellite. Even that though is up in the air a bit at least when the Eagles use only one LB because the knocks on Edwards are his speed and ability to cover consistently.

In most places, three-down linebackers are not considered rotational players but the Eagles may try to go that route in an effort to put together the most complete unit possible.

There shouldn’t be much mystery here with Edwards, White, Taylor, Dean, and Bradley entering camp with little to worry about even if the roles need to be clarified. The one caveat to that is Taylor due to his injury history. Elliss has opened enough eyes to believe another year on the PS is a good bet while Stevens probably has to show a little bit more to merit a continuation on the safety to LB transition.