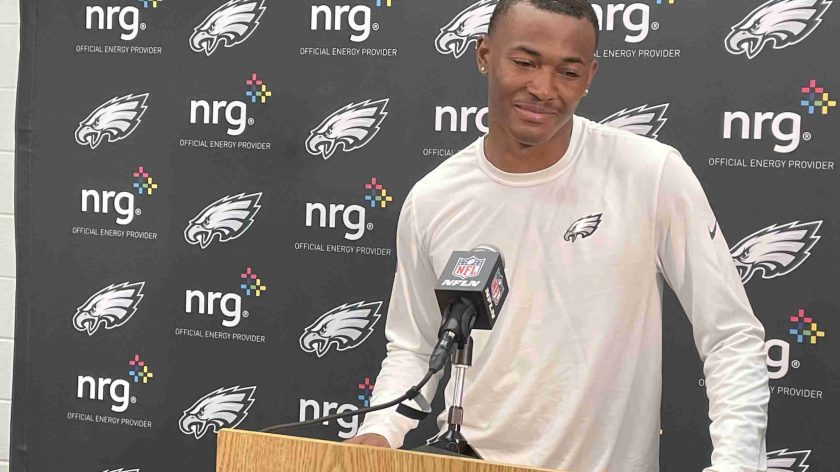 There was no way to escape it. Was there really any doubt? Did you really expect anything different?

Carson Wentz was incredibly effective against the Eagles on Sunday—of turning Washington’s FedEx Field into the world’s largest comedy club.

The current Washington Commanders’ quarterback and former Eagle was an anxious mess under pressure from his former teammates, sacked a career-high nine times for minus-58 yards and turning the ball over once in the Eagles’ 24-8 victory over the Commanders to move to 3-0.

The Eagles’ nine sacks is the most for any NFL team this season and was the most Wentz was sacked in a game.

Even though the Eagles have failed to score over the last five quarters of the second half, their 24 points marked the first time in franchise history the team scored 24 first-half points in three consecutive games.

Before the game, Fletcher Cox and Wentz embraced in the end zone like long-lost buddies. About an hour later, Cox and friends were constantly taking down their pal.

It was a little hard to distinguish if this game was being played at Lincoln Financial Field or Washington’s FedEx Field, because as soon as the hometown Commanders’ offense went out, a smattering of boos rained down on Wentz.

Jalen Hurts continued to be efficient, who after a slow start completed 22 of 35 passes for 340 yards and three touchdowns, while DeVonta Smith had the best game of his young career, catching a career-high eight passes for a career-best 169 yards.

The Eagles amassed 400 yards of total offense, while giving up 240 to Washington.

“We made it about us. We knew what we knew about Carson, but we knew it was a new day and he’s with a new team and he knows his issues, too, but we wanted to go out and play as a team and keep getting better,” said Eagles’ veteran defensive end Brandon Graham, who had 2.5 sacks and caused a fumble. “Our standard is our standard. I’m finally happy when we had one of those games, where it was a nine-sack game. We went out there and had fun.

“Knowing Carson, I felt like we had to make sure with any quarterback that you get pressure on them when you can and make sure that you keep them contained in the pocket, because we know when he gets outside the pocket, he’s a great quarterback. We played together. The defense stayed together, even when we were up, we made sure we didn’t let off the gas.”

The game was over by halftime.

The Eagles took a commanding 24-0 lead into intermission. By then, the Eagles had tallied 322 yards of total offense to Washington’s 50.

Hurts rebounded well to complete 18 of 27 for 279 yards and three touchdowns.

There was one stretch when the Eagles scored on four of five drives, scoring on a Jake Elliott 32-yard field goal, and touchdown receptions from Dallas Goedert, A.J. Brown (his first TD this season) and Smith.

At one point in the first half, Wentz had completed two of nine for 21 yards and had been sacked six times for minus-40 yards for minus-19 yards net passing for Washington. By halftime, those numbers nudged up to three of 10 passing for 24 yards, minus 40 yards on the six times Wentz was sacked, for minus-16 yards in net passing.

Early on, both quarterbacks transformed into previous incarnations. Wentz turned into, well, Wentz of 2020. And Hurts turned into, well, Hurts of circa 2020. Wentz held the ball too long, insecure in what to do in the pocket, while Hurts’ aim was all over the place.

Gradually, Hurts found his timing and began connecting long distance to Smith and Brown. The duo combined for 11 catches for 231 yards and two touchdowns over the first two quarters, whereas Washington’s receiving corps caught a total of three passes for 24 yards.

Eagles’ defensive coordinator Jonathan Gannon was willing to be aggressive, blitzing T.J. Edwards on the Commanders’ third play of the game. Gannon, however, found out quickly there was no need.

The Eagles sacked Wentz three consecutive times in the first quarter for minus-20 yards and four overall for minus-28 yards—using their front four.

Entering the game, the Eagles had a total of three sacks for minus-29 yards. Of the first seven times Wentz dropped back, he was sacked four times. By the half, the Eagles’ front four sacked Wentz six times, with each starter getting a sack.

Graham caused the most chaos, with five quarterback hits and causing the second-quarter fumble, which turned into the Eagles’ first touchdown, with Fletcher Cox, Josh Sweat and Haason Reddick each getting 1.5 sacks, and Javon Hargrave another sack and a fumble recovery.

When asked how a team gets nine sacks in a game, Graham replied, “Start fast like we did right off the rip, with Fletch, Sweaty, Javon, we’re always out there trying to get after (Wentz). It just kind of opened up for us as the game kept going and put pressure in his face.

The Eagles have trailed for 2 minutes, 38 seconds this season. That’s it. They have bluntly jumped on opponents, outscoring them 72-21 in the first half and outgaining them 1,341 to 890 in total yards of offense overall per game (averaging 447 yards of offense per game to 296.6).

It’s a team that has yet to face adversity.

“I know there is always room to get better,” Graham said. “There were plays that we left out there. We have to keep on making it about us. I love how we’ve started. But it’s about how we finish.”