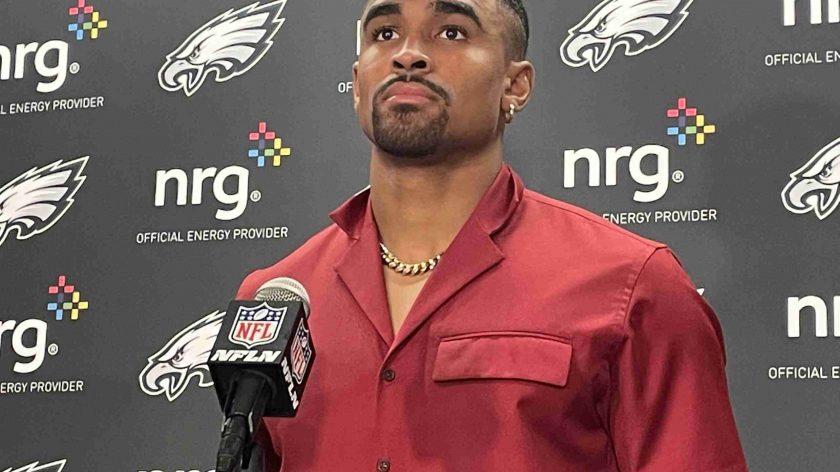 It wasn’t supposed to be this difficult. The Eagles, considered by many nationally to be the sexy pick to go far in the NFC playoffs, were projected to have an easy time with the Detroit Lions. And for major parts of the Eagles’ season-opening 38-35 victory on Sunday at Ford Field, they did.

Though as the final seconds were winding down, Nick Sirianni raised his hands in victory, but the Eagles’ coach could have easily raised his palms up and winced as he trotted off the field, grateful that the Eagles escaped as winners over the feisty Lions.

Jalen Hurts threw for 239 yards, completing 18 of 32, and ran for one score, A.J. Brown caught 10 passes for 155 yards, while the offensive line did a stalwart job, opening gaping holes for Miles Sanders to rush for 96 yards on 13 carries, including a touchdown. The Eagles did roll over the Lions’ defense for 455 total yards of offense—216 yards and all four of the Eagles’ offensive touchdowns coming on the ground.

The loud Lions’ fans made it difficult to hear. The Eagles struggled with that. They were flagged twice for delay-of-game penalties, flagged twice for having a 12th player in the huddle, and were late getting plays in.

Detroit attacked. There were times when it worked, though Hurts dealt well with it by improvising and moving the ball on the ground.

But the Eagles defense, which had its dubious moments last year, seemed to have problems against a Lions’ offense led by Jared Goff.

Goff completed 21 of 37 for 215 yards and two touchdowns, getting sacked once. There was one stretch late in the game, while it was far from decided when Goff and the Lions converted four third downs, the last of which was Goff’s 22-yard touchdown pass to DJ Chark with 3:51 to play.

Thankfully for the Eagles, they were able to rest on their anchor offensive line to run out the remaining clock, sealed by the second Sanders’ 24-yard run.

After a horrid start, which saw the Lions take the opening kickoff 75 yards on nine plays, the Eagles scored 21 unanswered points on TD runs from Hurts and Sanders, and a pick-six from James Bradberry, and looked like they would run away and take control of the game.

But the defense gave up 386 total yards of offense, without hardly any pressure being put on Goff. The Lions converted nine of 14 third downs.

D’Andre Swift, the former St. Joseph’s Prep star, ran by the Eagles for a game-high 144 yards rushing on 15 carries, including a touchdown. Swift’s 50-yard run on the opening drive set the Lions up for their first and only lead.

The Eagles were leading 38-21 entering the fourth quarter, and just when it seemed the game was out of reach, the Lions came surging back. Detroit wound up scoring on three of its last four possessions, before Sanders and the offensive line ran out the remaining clock.

It does not fall under the pretty category, but the one saving nugget is the Eagles would have lost a game like this early last season.

Brown’s 155 yards through the air tied a career-high when he was with Tennessee, and according to Elias Sports, he finished with the most receiving yards ever by a player in their Eagles debut (the previous high was Donte’ Stallworth’s 141 yards in 2006).

And finally, Brown’s 155 yards is the most by an Eagle since Alshon Jeffery caught eight passes for 160 yards on Dec. 16, 2018 against the Los Angeles Rams.