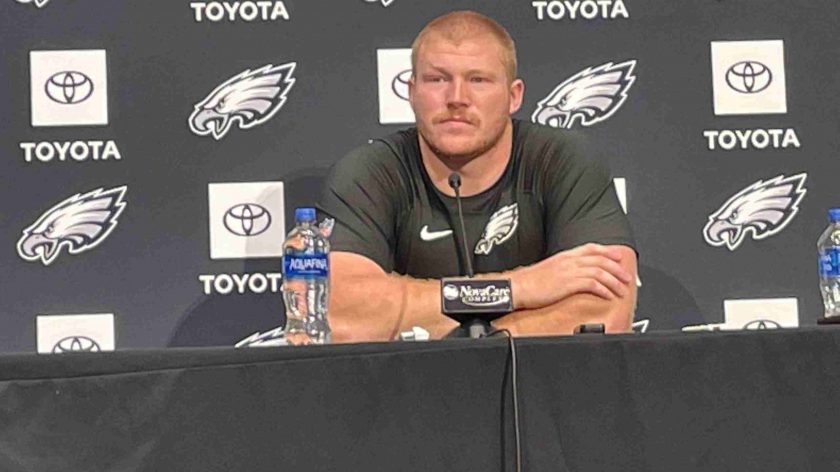 Earlier this week we told you not to sweat Cam Jurgens’ contract and the Eagles got it done in plenty of time by inking the 2022 second-round pick to his four-year deal on Friday in plenty of time for training camp which is set to begin on July 26.

The Eagles now have their entire 2022 draft class under contract.

Third-round selection Nakobe Dean agreed to his rookie deal on May 16.

Rookie holdouts were virtually eliminated with the 2011 Collective Bargaining Agreement thanks to a slotting system and that continues with the current CBA.

All 32 2022 first-round picks have already been signed with No. 20 overall pick, Kenny Pickett, the last to put pen to paper with Pittsburgh last week.

What little wiggle room there is — things like fully-guaranteed money and offset language — tend to take place in the second round, making that the wheelhouse for what complication there is. Jurgens, the No. 51 overall pick, is the 19th second-rounder to sign his deal.

Rewind to last year and you will find that the Eagles are about a month ahead of things with a smaller-sized draft class. The organization signed Smith, on June 3, inking the rising star the same day they agreed to terms with three other draft picks: third-round defensive tackle Milton Williams, fourth-round cornerback Zech McPhearson, and fifth-round running back Kenny Gainwell.

The next domino was June 7 when another sixth-round pick, LSU safety turned LB JaCoby Stevens, was secured.

There was growing angst on second-round pick Landon Dickerson, so much so that a lot of my time on BIRDS 365 was talking some off the ledge when it came to a potential holdout and sure enough the Alabama product was signed on July 26, two days before the start of training camp.

Jurgens is expected to start his NFL career as the heir-apparent to All-Pro center Jason Kelce while also potentially cross-training at guard when things start to get whittled down to what will be the 53-man roster.

Kelce is excited to mentor Jurgens.

“I think I’ve been, in some ways, been trying to mentor my replacement for eight years now,” Kelce joked. “You always want to try to help young guys and help the team be better moving forward. I’m smart enough to realize my time is limited and I’d like to be a part of something that (lasts longer). The only way you can last in this game is through the players and relationships that you forge as a player.”

All five of the team’s 2022 draft picks are now under contract.#FlyEaglesFly pic.twitter.com/9XWcMNKiko

The Eagles also made things official with veteran safety Jaquiski Tartt on Friday.

Tartt, 30, agreed to terms on a one-year deal back on June 17. The deal is believed to be similar to the one Anthony Harris signed this offseason with the ability to make up to $2.5 million.

That’s a better deal than Tartt got last year when he re-signed with San Francisco for the veteran minimum and it also reveals the preference for the Eagles, who would like to see the ascending Marcus Epps handle one safety spot with the best man winning between Tartt and Harris.

Tartt’s presence also gives Jonathan Gannon optionality, however, in that if Epps doesn’t grab the brass ring so to speak the DC could default to the two veterans.

The wild card in the safety mix is third-year pro K’Von Wallace, who hasn’t developed like the Eagles would have liked to date but is still in the mix to earn playing time and is expected to be a big part of Michael Clay’s special teams units.