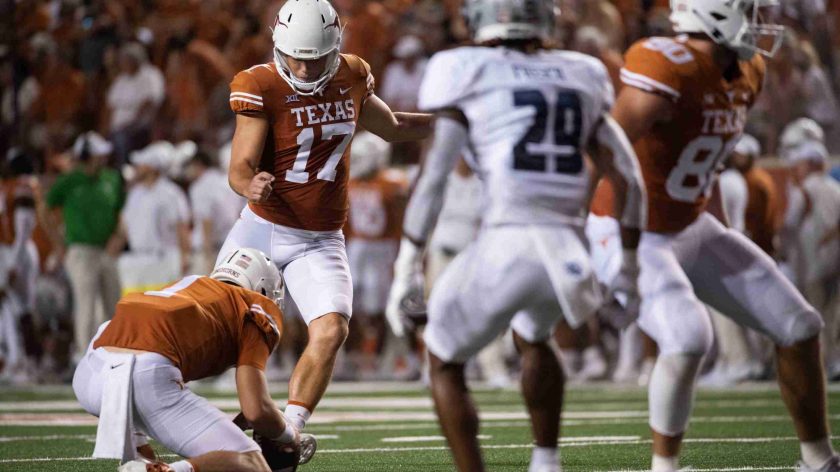 Photo Credit by University of Texas/CollegePressbox.com

PHILADELPHIA – With Jake Elliott’s status up in the air after being injured against Jacksonville, the Eagles are bringing in another kicker to the practice squad.

The NFL Network first reported the move and an NFL source confirmed it with JAKIB SPorts.

The #Eagles are signing kicker Cameron Dicker to the practice squad, per source.

Jake Elliott got banged up late in Sunday’s game. If he can’t go this week, it’d be Dicker the Kicker.

Cameron “The Kicker” Dicker was a dual-option at Texas, handling both placekicking and punting duty during his final season. He finished his college career as the Longhorns’ all-time leader in field goals, making 60-of-79 topping out with an 86.7 FG% during his final season in 2021. As a punter, Dicker booted 16 of 50 yards or more and averaged 46.8 yards per attempt in 2021.

The Eagles also worked out former East Carolina kicker Jack Verity on Tuesday before deciding on Dicker. Neither has kicked in a professional game.

He originally signed with the Los Angeles Rams as an undrafted free agent but was unable to wrest the job away from veteran Matt Gay. He also spent two days in Baltimore over the summer as a punter. The Ravens, of course, have All-Pro Justin Tucker, a fellow Texas product who is regarded by many as the best placekicker in NFL history.

On the NFL’s in-house wire which lists all the workout players around the league, Dicker was actually listed as a punter because that was his last designation by Baltimore.

His ability to punt shouldn’t go unnoticed either because Eagles’ punter Arryn Siposs is struggling.

Elliott’s plant leg was hit by Tyson Campbell of the Jags while striking a 43-yard field goal at the end of the third quarter in what was a 29-21 Eagles win.

An unnecessary penalty gave Philadelphia a first down so Nick Sirianni took the FG off the board. The offense was not able to turn the extra opportunity into a touchdown, however, and Elliott came back on to nail a 28-yard field goal in poor conditions.

“Jake is one of the toughest people I’ve ever met regardless of the position that he plays,” said Eagles special teams coordinator Michael Clay on Tuesday. “Everyone sees a kicker and they think something differently, but he’s tough out there, and him to go back out there, he drilled that – the first field goal, drilled it, to come back, hit another wet ball in a tighter location right there still takes a lot of guts right there, and he did.”

Clay, like Sirianni on Monday, would not rule Elliott out of Sunday’s game in Arizona.

“I’m around him almost every day, just the toughness he has. He may be the pound-for-pound best athlete on this team right here, but just the toughness,” said Clay. “Let’s not talk about his mental toughness because that guy, he’s got ice water in his veins when it comes down to it, but he’s one of those guys when it comes to competitions, he’s going to chirp you, he’s going to try and beat you in everything he does.”

If Elliott is unable to play against the Cardinals, the Eagles will simply elevate Dicker from the PS.

To make room for the new kicker on the 16-man PS, the Eagles released tight end Dalton Keene.