Eagles’ Shane Steichen is in demand 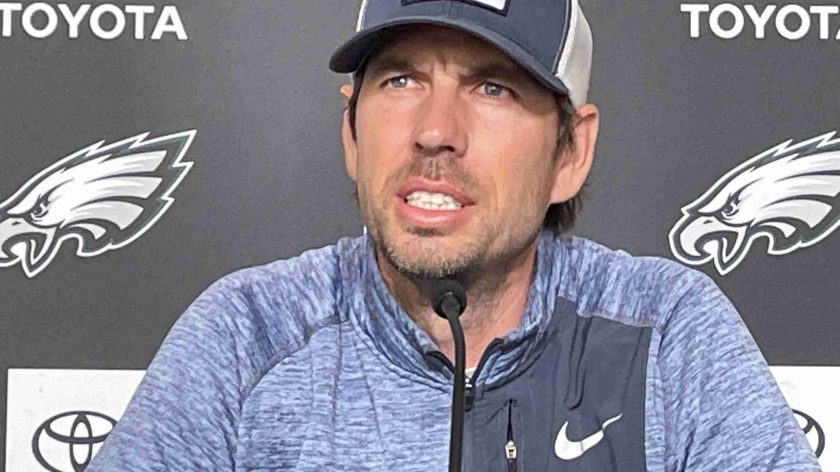 PHILADELPHIA – While the haves in the NFL are preparing for the playoffs, many of the have-nots are gearing up for hiring season, and Eagles offensive coordinator Shane Steichen is proving to be one of the more popular names.

Of the five openings around the league, Steichen, the play-caller for Philadelphia’s third-ranked offense, has been requested to interview by three different teams.

Houston, which has also requested to speak with Philadelphia DC Jonathan Gannon, Indianapolis, and Carolina all want to explore things with Steichen.

Denver, which moved on from Nathanial Hackett before his rookie season was even completed, and Arizona, which fired Kliff Kingsbury, are the only two openings that haven’t requested to speak to Steichen yet but the Cardinals, who are also looking for a new GM, have not yet made any reported requests, focusing first on the executive position.

Both Steichen, 37, and Gannon, 40, are permitted to interview in a virtual fashion during the Eagles’ bye week before the divisional round of the playoffs and Nick Sirianni hinted that the interviews will happen later this week.

“I know that first and foremost, is that these guys are committed to this team,” Sirianni said of his coordinators. “You have some time off here later in the week as far as we’re not grinding until 10 o’clock, maybe every night. There is some time that’s happening later in the week for them to be able to do that.”

Last month, Steichen was asked about potentially getting head-coaching interviews, something that was obviously going to come to fruition after a 14-3 regular season.

“If that opportunity came about, that would be awesome but right now we’re focused on the (next opponent), and that’s it,” Steichen said at the time.

The Eagles’ offense was one of the most impressive in the league this season as third-year quarterback Jalen Hurts took a massive leap in his development from a competent starter to an MVP candidate. While a late-season shoulder sprain derailed Hurts’ case for MVP honors, Philadelphia finished 14-1 with him as the starter. The offense as a whole was third in points scored, ninth in passing, and fifth in rushing.

Along with Hurts, receivers A.J. Brown and DeVonta Smith, and running back Miles Sanders all had their best seasons from a statistical standpoint and all five starting offensive linemen: from left to right Jordan Mailata, Landon Dickerson, Jason Kelce, Isaac Seumalo, and Lane Johnson were either Pro bowl selections or alternates.

Also, a feather in Steichen’s cap was the season before he came to Philadelphia when he was the OC with the Los Angeles Chargers when Justin Herbert was the Offensive Rookie of the Year so he already has the demonstrated performance of helping to develop very good young QBs.

If Steichen leaves for a head-coaching job, his likely replacement will come from within with passing game coordinator Kevin Patullo, and quarterbacks coach Brian Johnson the top names in the mix.

Johnson, though, could get plenty of bites for OC jobs elsewhere as well. Sirianni is also very high on assistant QB coach/offensive assistant Alex Tanney and he will likely move up the ladder again this offseason.

“As the head coach, I still have to think about those things because that is a very important part of being a head coach, is who you replace guys with,” Sirianni said. “You’re hoping that you have success. You’re hoping you lose guys for the benefit of them and their career and their family.

You hate to lose guys because the reason they’re here in the first place is because I felt like they were really good coaches. Just like you go into a job interview and you say, ‘I want this guy, this guy, and this guy.’ That’s not always the reality that you’re going to get all those guys.