Eagles scoring with the run 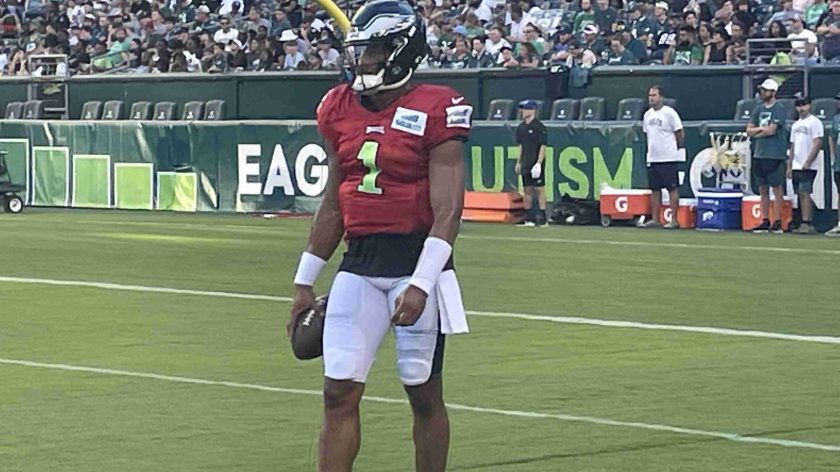 The NFL is supposed to be a passing league. Yet, last week, just six of the 16 Week 5 winning quarterbacks threw a touchdown pass. Only four threw more than one.

For the third time in five games, Jalen Hurts didn’t throw a touchdown pass, but it didn’t matter. The Eagles still beat the Arizona Cardinals, 20-17, to remain the NFL’s only unbeaten team.

Hurts’ has put up some impressive passing numbers in the first five games. He is second in yards per attempt (8.5), fifth in completion percentage (67.9), and seventh in passing yards (1,359).

But Hurts has thrown just four touchdown passes so far. The only quarterback in the league with at least 125 pass attempts who’s thrown fewer is the Giants’ Daniel Jones (3).

And oh, by the way. The Giants aren’t doing too badly either. They’re 4-1.

The Birds are using their run game, including a substantial contribution from Hurts, to get into the end zone. They have a league-high 12 rushing touchdowns, including six – six – by Hurts. Only Browns running back Nick Chubb has more rushing touchdowns than Hurts through the first five games (7).

Hurts has completed just 8 of 20 passes for 47 yards in the red zone this season. He has just two red-zone TD passes so far and has thrown only six in his last 13 starts dating back to last year.

But that hasn’t slowed the Eagles down much. They’re eighth in the league in red-zone offense, converting 61.9 percent of their trips inside the 20 into touchdowns (13 of 21).

–Six of DeVonta Smith’s 10 catches against the Cardinals were screens. Thirty-one of his 87 receiving yards came on screens. Three of tight end Dallas Goedert’s eight catches and 22 of his 95 yards were screens.

–Goedert has 24 catches this season. A team-high 11 for 126 yards have come on screens. That’s 11.4 yards per screen. Eight of Smith’s 28 catches have been on screens.

–The Eagles showed two personnel groupings against the Cardinals that they hadn’t previously used. On the first play of their second possession of the game, they used 02-personnel (0RB, 2TE, 3WR). Hurts ran the ball out of shotgun on the empty-set play for a five-yard gain. Early in the second quarter, they used 21-personnel (2RB, 1TE, 2WR) on a third-and-three play at the Arizona 32-yard line, lining up Miles Sanders and Kenny Gainwell alongside Hurts. Sanders ran for a four-yard gain.

–Hurts has a 95.0 passer rating with 11P this season. That includes a 69.5 completion percentage and an 8.7 yards-per-attempt average. All 11 of his sacks have been with 11P.

–The Eagles blitzed a season-high 37.2 percent against Kyler Murray and the Cardinals (16 of 43 pass plays).  Murray completed just 7 of 15 passes when the Eagles sent five or more rushers, averaging just 4.4 yards per attempt. They intercepted Murray once and sacked him once. Both came with five-man rushes.

–Nine of the Eagles’ 16 blitzes against the Cardinals came on first down. Three were on second down and four on third down.

–They had 21 quarterback pressures against the Cardinals, including a team-high seven by Haason Reddick, who had the Eagles’ lone sack, and five by Josh Sweat. Reddick had just two pressures in the Eagles’ first two wins against the Lions and Vikings but has 15 in the last three games.

–The Eagles’ 17 sacks are the fifth most in the league behind the 49ers (21), Cowboys (20), and Bucs and Commanders (both with 19). Eight of those 17 sacks have come in the fourth quarter. They also have four in the first quarter, three in the second quarter, and two in the third quarter. Nine of their sacks have come on either third (7) or fourth (2) down.

–It won’t be easy sacking the Cowboys’ Cooper Rush Sunday night. He’s only been sacked seven times since replacing injured Dak Prescott in Week 1, though three of those seven sacks came last week against the Rams.

–Rush doesn’t hang on to the ball. He has the seventh fastest snap-to-release average (2.40 seconds) in the league this season, according to Pro Football Focus.

–His 68 rushing attempts are the most by a quarterback. The Ravens’ Lamar Jackson is a distant second with 49. The Bills’ Josh Allen has 41.

–Hurts is on pace for 231 carries. That would obliterate Jackson’s record of 176 rushing attempts in 2019. Hurts had 139 carries in 15 games last season. To give you a sense of how many carries that is, last year just seven running backs had more than 231 rushing attempts.

–Hurts, who can deadlift 620 pounds, has converted 11 of 13 and-1s on third and fourth down this season.

–The Eagles are 25th in third-down defense, allowing opponents to convert 45.3 percent of their third-down opportunities. Opponents have a 31.0 conversion rate on third-and-7-plus (9-for-29). Opposing quarterbacks have converted 23 of their 45 third-down pass attempts (51.0%) against the Eagles into first downs.

–The Eagles have given up just one touchdown pass to a tight end in the first five games. Last year, they gave up an NFL-high 13.

–Micah Parsons has 28 quarterback pressures, including six sacks. The 28 pressures are the second most in the league to 49er Nick Bosa’s 31.

–The Cowboys are 26th in red-zone offense, converting just 45.5% of their red-zone opportunities into touchdowns.