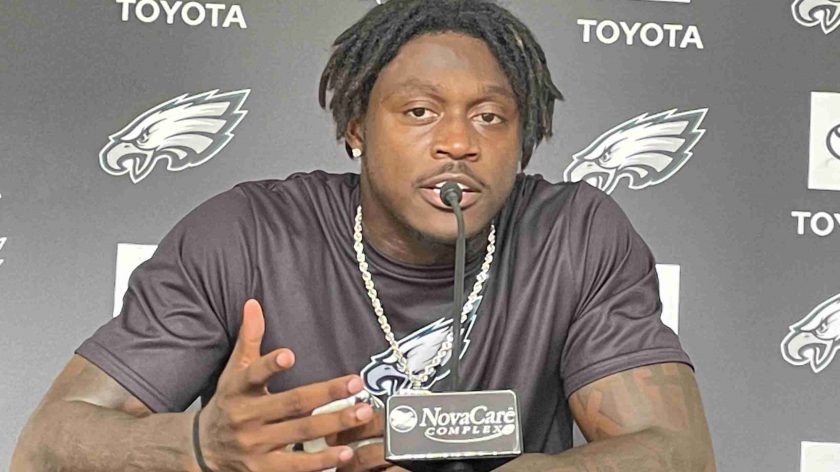 Dan Quinn isn’t getting a lot of sleep this week.

Like every other defensive coordinator that has faced the Eagles in this young season, the Cowboys’ Quinn is trying to figure out the best way to prevent the Birds’ talented receiving corps from wreaking havoc on his unit Sunday.

Wide receivers A.J. Brown, DeVonta Smith, and Quez Watkins and tight end Dallas Goedert have posed major problems for every team the Eagles have faced in their impressive 5-0 start.

All of them can stick a dagger in your heart. Brown had 10 catches for 155 yards in the Eagles’ Week 1 win over the Lions. Watkins had a 53-yard touchdown catch in their Week 2 win over the Vikings.

“Defensive coordinators don’t know how to defend them,” said Mike Quick, a five-time Pro Bowl wide receiver and the Eagles’ long-time radio analyst. “I’ve seen some defensive coordinators go with man coverage. But you can’t use a lot of that against them because they’re going to beat you in man coverage. You also can’t play a lot of it because of Jalen’s (Hurts) ability to run.’’

Hurts is third in the league in rushing first downs with 22, behind only the Browns’ Nick Chubb (27) and the Raiders’ Josh Jacobs (26). His 68 rushing attempts are far and away the most by any quarterback. The Ravens’ Lamar Jackson is second with 49. Only Chubb has more rushing touchdowns (7) than Hurts (6).

“The best thing is to use a lot of zone and try and make them bleed their way down the field, and then try and stop them in the red zone,’’ Quick said. “Because if you do it any other way, they’re going to carve you up.’’

The problem there is that the Eagles are eighth in the league in red-zone offense, converting 61.9 percent of their red-zone opportunities into touchdowns.

Hurts’ passing numbers have taken a huge jump this season. He’s averaging 271.8 passing yards per game, up significantly from last year’s 209.6. His completion percentage has soared from 61.3 to 67.9, which is the fifth-best in the league. His yards-per-attempt average has increased from 7.3 to 8.5, which is second in the league.

A lot of Hurts’ improvement has to do with all of the hard work he put in during the offseason and the fact that he’s in the same offensive system for the second year in a row.

But a lot of it also has to do with the people he’s throwing the ball to and the trust he has in them. Goedert, a second-round pick in the 2018 draft, and Smith, the tenth overall selection in the 2021 draft, combined for 120 catches, 1,716 yards, and nine touchdowns last season.

But general manager Howie Roseman’s bold draft night acquisition of Brown from the Tennessee Titans this spring has been the piece de resistance.

“I think he makes a big difference just because he can do so much,’’ said Quick. “He can do everything.

“The short passes, he can handle those. And then the run-after-the-catch aspect. He can get down the field for the deep ball. He’s excellent at the intermediate stuff. He can catch the ball in traffic.

“He can block. He can shield people off. The touchdown he caught against Washington, the cornerback couldn’t get through his big body. Jalen threw it to a spot where A.J. could put his back to the defender and box him out like a forward in basketball. He’s really good at that stuff. He’s just a solid football player.

“The fact that Jalen has so much confidence in him and can throw the ball to him even when it appears he’s covered, I just think it makes the offense so much better.’’

Brown and Hurts have a close relationship. They met in 2015 when Hurts hosted Brown on recruiting trip to Alabama and have been good friends ever since. Hurts is godfather to Brown’s two-year-old daughter Jersee.

“The chemistry they have, that’s everything,’’ Quick said. “You’re your quarterback understands and believes that you can win even when you’re covered, that is everything. That makes the offense so much better.’’

“To have an experienced guy on the other side who can do all of the things that he does, you know DeVonta is a student,’’ Quick said. “So he’s watching everything A.J. does. Anything he needs to pick up, he’s picking it up. Having a veteran like A.J., it was way better than going into the draft and picking up the top receiver.

“This going to be the thing about this receiving group and this team. We’re five games in and they’re just scratching the surface of what they can do. DeVonta can go off for 150-200 yards in any game. If you target him, he’s going to win all the time. He can go deep on people. You can’t cover him. His route-running is so sharp and precise.

“If you try to man-cover him, I don’t care who it is, he can get open against you. That’s just how good and smooth he is. He’s just one of these kids that can run routes and make you look bad, and it doesn’t even look like he’s working that hard.’’

Smith has a lean, 170-pound body that doesn’t look like it could hold up to an NFL pounding.

“That’s still something you have to consider with him,’’ Quick said. “That doesn’t go away. His body isn’t going to change. We know that injuries are a huge part of this business. So that’s going to be an ongoing concern.

“But what I like is that he’s smart. Especially when he has the ball. You’re very seldom going to see him take a direct hit. Now, if he doesn’t see the hit coming, you’re going to take some of those shots in this game. But he’s very smart in terms of how to run with the football once it’s in his hands.’’

The Eagles have predominantly become an 11-personnel – one running back, one tight end, and three wide receivers – offense. They’ve used 11P more than 70 percent of the time in the first five games and that is expected to continue, barring injuries.

Watkins, who usually is the third wideout, only has five catches. But his 4.35 speed is something defenses always have to take into account when he’s on the field.

“His route-running is as good as anyone’s and he may be one of the fastest guys in football,’’ Quick said. “So, if you pay too much attention to the other two, Quez is going to burn you.

“You’re not going to see Quez have a big number on the stat sheet every week. But those times they choose to go to him, he’s going to come up with a 40- or 50- or 60-yard play.

“And that’s the kind of thing that worries defensive coordinators. They’re thinking, OK, we’ve got to deal with this guy and this guy and this guy. But what about this guy? Because 16 can get behind anybody in football. He has that kind of speed to, as they say, take the top off a defense.

“The guys they have at the wide receiver position, they’re as good as any group in the league. And we haven’t even talked about Zach Pascal. He can do everything. Like Brown, he’s just a football player. He can run a reverse or end-around. He can crack on a linebacker. If you need him to take on a defensive end or be in the mix on special teams, he can do it.

“And he can catch the football. I don’t know that I’ve seen him drop a ball. He’s as tough as nails and he’ll make the tough catches and he’ll mix it up.’’

The plethora of talent on the outside has created a major problem for defenses with respect to how to deal with Goedert inside.

The Eagles have used him a lot in the first five games on screens. Eleven of his 24 catches and 126 of his 335 receiving yards have come on screens. So has his one touchdown catch, a 22-yarder against Washington.

“He’s the best screen runner there is at that position,’’ Quick said. “He’s patient when he needs to be patient. He knows when to hit the gear. He’s just a really good runner with the ball in his hands, whether it’s with the screen game or when he catches it in the open field.’’

And Quick thinks the best is yet to come.

“I don’t think we’ve seen the full influence of them (the wideouts) on him yet,’’ he said. “You’ve got to make sure you have so much of your resources geared toward the outside guys. But Dallas is one of the four or five best tight ends in all of football. What do you do about him if you’re focused on those guys on the outside?

“I think that’s one of the reasons why this team is going to be so hard to defend. Because their roster of weapons, they just make it difficult for defenses.

“Where do you deploy your main resources? If they focus too much on not getting beat by the pass, oh, by the way, the offensive line can open holes and Jalen can give the ball to Miles Sanders and they can beat you in the run game.’’