Eagles receive a scare getting by the Cardinals, 20-17 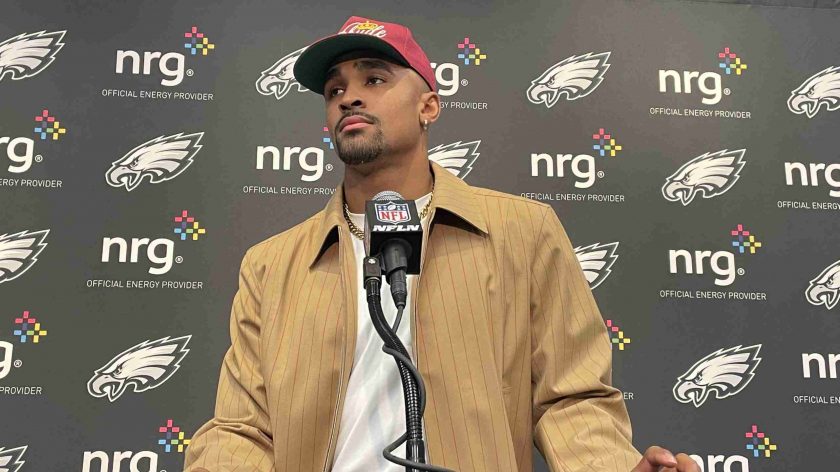 Was the trip worth it? It was certainly on the minds of thousands of Eagles fans who had poured into State Farm Stadium, in Glendale, Arizona, on Sunday.

What started as a vacation, not only for the Eagles’ faithful but for the Eagles, grew to be very sketchy in the game’s closing minute.

If not for a major error and a missed tying field goal by a replacement kicker, the Eagles would not be 5-0 for the third time in franchise history (1981 and 2004 were the other two times) after escaping the Arizona Cardinals with a 20-17 victory.

In the game’s final minute, Cardinals’ dynamic quarterback Kyler Murray slid at the Eagles’ 25 when he could have easily got the first down. By miscalculating the down and where the first down was, Murray, on third-and-one, then opted to spike the ball, forcing a fourth-and-one, and Matt Ammendola into trying a 43-yard field goal attempt that sailed wide right.

Jalen Hurts completed 26 of 36 passes for 239 yards, while he rushed for a game-high     61 yards and the Eagles’ only two touchdowns.

Murray was contained, for the most part, completing 28 of 42 passes for 250 yards and a touchdown.

The Eagles kept Murray off the field, controlling the ball 34-minutes, 39-seconds to Arizona’s 25:21 time of possession.

Mistakes at critical times stymied the Eagles’ offense. On their first second-half possession, back-up left guard Sua Opeta got flagged for holding on first-and-10 at the Arizona 15. The penalty negated a Miles Sanders’ 11-yard run and pushed the Eagles back to the 25.

It also killed the momentum the Eagles had. They had to settle for a Cameron Dicker 42-yard field goal and a 17-10 lead, instead of a 21-10 advantage.

Ironically, when regular left guard Landon Dickerson returned, he was flagged with a holding call on a first-and-10 at the Arizona 41 on the Eagles’ last drive of the third quarter. The hold, plus a rare DeVonta Smith dropped pass, squashed another series when the Eagles were moving.

Early on, it looked as if the Eagles would blow out Arizona. Philadelphia bolted out a 14-0 lead, thanks to a pair of Hurts’ one-yard scores, and Murray’s inability to move the Cardinals.

The Eagles were already missing starting left tackle Jordan Mailata with a shoulder injury, and when Dickerson went down in the first half and was replaced by Opeta, it made it open season on the left side of the Eagles’ offensive line.

The Eagles got out to a fast start, scoring on two of their first three possessions. Over the course of 27 plays in those drives, the Eagles faced four third downs, converting three, and a fourth down. The Eagles showed great balance in the two drives that built a 14-0 lead, running the ball 12 times and throwing 15 times.

Arizona answered the Eagles’ start with 10 unanswered points. The Cardinals got on the board when Murray hit Hollywood Brown on a third-and-three at the Eagles’ 25 with 5:24 left to play in the half.

It was a play in which linebacker T.J. Edwards, safety C.J. Gardner-Johnson and cornerback Darius Slay either bounced off Brown or swatted at nothing but air.

The Eagles’ shoddy tackling continued on Arizona’s next scoring drive, when Ammendola closed the half with a 20-yard field goal. That series was extended when Edwards and nickel back Josiah Scott ricocheted off of James Conner on a 17-yard run on a third-and-1 at the Eagles’ 38.