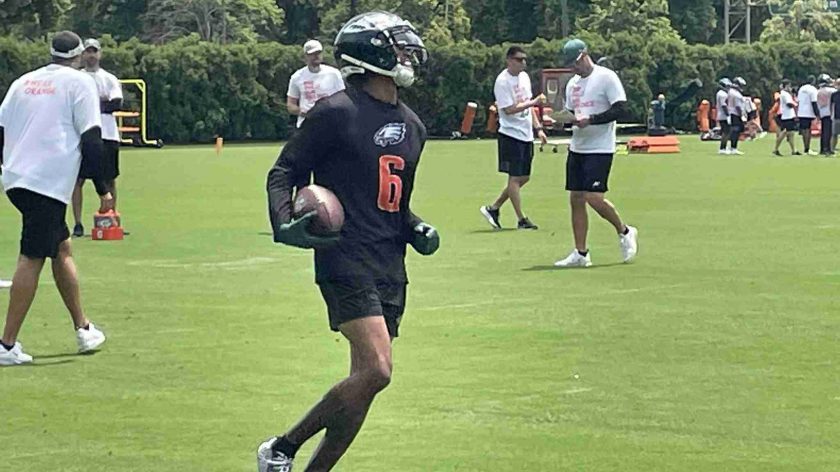 PHILADELPHIA – The first of two Eagles OTA practices open to reporters this spring went about 50 minutes in South Philadelphia with the session featuring individual drills and then 7-on-7 work sandwiched by a 10-minutes special teams period in which Michael Clay had his charges working on kick coverage.

The main event was Jalen Hurts showing off a nice deep touch to DeVonta Smith particularly.

Attendance was far from 100% despite the move away from mandatory work and the scaleback of the voluntary process as well.

Some of the players who weren’t engaging in grass time were veteran offensive linemen Jason Kelce, Lane Johnson, and Jordan Mailata. Some of that could have been about the reported nuptials of backup offensive lineman Brett Toth, who is getting married this weekend.

Had Toth been on hand, he would have not been a full participant anyway because he is rehabbing from a torn ACL suffered in Week 18 last season and posed to be getting married this weekend.

With Kelce absent rookie Cam Jurgens got plenty of OC reps and the Isaac Seumalo-Jack Driscoll battle at right guard will have to wait. Seumalo took first-team work in individual drills at RG while Driscoll slipped out to right tackle in lieu of Johnson.

Hurts, though, looked sharp, especially when targeting Smith. The QB1 hit his emerging second-year WR for deep gains down each sideline, one past Pro Bowl corner Darius Slay and another beating a cover-2 look from James Bradberry with Marcus Epps quickly closing the gap.

Hurts also went deep down the seam to Deon Cain, a throw that the young QB typically hasn’t been comfortable with.

Cain, by the way, took advantage of the extra reps he got in replace of the absent receivers, flashing on a few occasions. A big target at 6-foot-2 and 202 pounds, Cain is a third-year player out of Clemson who could surprise this summer.

His defensive counterpart was safety Jared Mayden, who looks like a physical presence at a position the Eagles need depth. On one rep Mayden overwhelmed the undersized Britain Covey en route to a pass breakup.

With Watkins, Pascal, and Reagor absent, veteran Greg Ward got the first reps with A.J. Brown and Smith when the Eagles went with 11 personnel. There were also plenty of four-wide and even some five-wide reps with running backs Kenny Gainwell and Boston Scott split out.

On defense, Jonathan Gannon deferred to the veterans with T.J. Edwards and Kyzir White getting the first looks at nickel linebacker and Davion Taylor mixing in. Rookie Nakobe Dean will be asked to work his way up the depth chart this summer.

The backup cornerback who shined a bit was second-year man Zech McPhearson, who had a nice PBU of a Gardner Minshew throw to Greg Ward.

The second team CB opposite McPhearson was Mac McCain with Josiah Scott at nickel. K’Von Wallace and Andre Chachere were at safety behind starters Anthony Harris and Epps. Christian Elliss was at second-team LB alongside Taylor.

The third-team group was was Dean at LB with JaCoby Stevens. The CBs were Tay Gowan and Kary Vincent outside and Josh Blackwell in the slot while Mayden and undrafted rookie Reed Blankenship handled safety duties.

Potential backup tight end Tyree Jackson was also on the field taking mental reps while wearing a big brace on his right leg. Jackson, like Toth, tore his ACL in Week 18 and continues to work his way back.