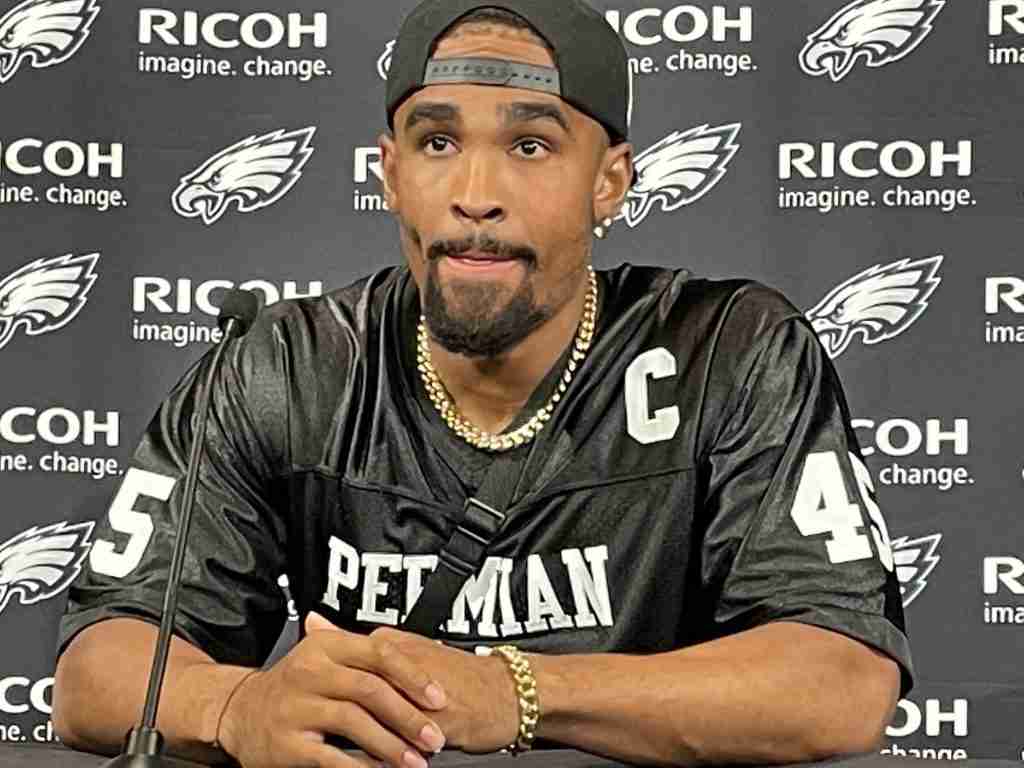 Considering that we’re only two games into a 17-game marathon, there aren’t a lot of firm conclusions we can draw from the Eagles’ victories over the Lions and Vikings, other than that they’re going to be a pretty good team if they can stay healthy.

But one conclusion I think we can safely make right here, right now, is that Nick Sirianni’s offense is going to have a heavy three-wide receiver flavor this season.

The most the Eagles have used 11P in the eight years I’ve been charting their personnel groupings was 69.7 percent in 2015, which was Chip Kelly’s Philly swan song.

In Doug Pederson’s five years as the Eagles’ head coach, he mixed 11P with multiple-tight end sets, particularly after Dallas Goedert joined Zach Ertz in the tight end room in 2018.

The one year Pederson really used 11P extensively was in 2017 when they won the Super Bowl. They used three-wide receiver sets 65.1 percent of the time that season.

The offseason acquisition of wide receiver A.J. Brown has been the major impetus for the dramatic switch to three-wide receiver sets. Eleven personnel always has been Sirianni’s offensive preference. But when the Eagles lost five of their first seven games last season, he made a bold decision to become a run-heavy offense. And that included using a lot of 12- (two tight ends) and 13- (three tight ends) personnel.

The Eagles had a league-high 60.6 run-play percentage in their last 10 games in 2021. It’s down to 52.1 so far this year, which still is the fourth highest percentage in the league. But 49 of their 73 rushing attempts have been with 11P, many of them RPOs. They are second in the league in rushing after two games, averaging 189.5 yards per game on the ground.

In their win over the Vikings, Brown, wide receiver DeVonta Smith and tight end Dallas Goedert combined for 17 catches and 231 yards. All 17 of those receptions were with 11P.

Twenty-nine of Hurts’ 31 pass attempts against the Vikings were with 11P. Ironically, one of the two that wasn’t was his 53-yard touchdown bomb to Quez Watkins, which was with 12P.

–Hurts’ 83.8 completion percentage against the Vikings was the highest of his NFL career and his third highest since high school in games in which he had more than eight pass attempts. In 2019 at Oklahoma, he completed 20 of 23 attempts (87.0) against Houston and 16 of 17 (94.1) against West Virginia. He had a 69.7 completion percentage with the Sooners in 2019.

–Hurts’ 31 throws Monday averaged 9.2 yards in distance. That was up from 5.6 in Week 1. He attempted just four passes longer than 10 yards against the Lions in Week 1. He had 11 against the Vikings, completing seven of them.

–Hurts, who had 10 rushing touchdowns last season, already has three in the first two games. The NFL single-season record for rushing TDs by a quarterback is 14 by Cam Newton in 2011.

–Hurts and teammate Miles Sanders each have nine rushing first downs. That’s tied for the sixth most in the league.

–Hurts averaged 2.61 seconds getting the ball out against the Vikings, according to Pro Football Focus. He averaged 2.55 seconds against the Lions. Both numbers are quicker than last year when he averaged 2.93.

Blitzing the Night Away

–The fans clamoring for defensive coordinator Jonathan Gannon to unleash the hounds got their wish Monday night.

The Eagles blitzed Kirk Cousins on 10 of his first 37 dropbacks (27.0 percent). Neither of their two sacks came on blitzes, but two of Cousins’ three interceptions did. He completed just two of 10 passes when Gannon sent extra rushers after him. With a 17-point lead, the Eagles settled back into a four-man rush on the Vikings’ final possession of the game.

Gannon actually blitzed a fair amount against the Lions in Week 1. He sent extra rushers on eight of Jared Goff’s 38 dropbacks (21.0 percent). Goff was just

Haason Reddick has been quiet in his first two games as an Eagle. The Camden native, who had the fifth most sacks in the league with the Cardinals the previous two seasons, has just two hurries in 52 pass-rush opportunities in the Eagles’ first two games. Both of those hurries came against the Vikings.

Josh Sweat has a team-high nine pass-rush pressures in the first two games – a sack, two hits and six hurries. Defensive tackles Javon Hargrave and Fletcher Cox each have six pressures. Cox has a team-high 1 ½ sacks.

–Dallas Goedert is averaging 17.8 yards per catch in the first two games. Just as impressive: he’s averaging 13.4 yards after the catch.

–The Eagles’ average starting field position against the Vikings was the 17.4-yard line. It was their lowest start average since Week 7 of the 2020 season against the Giants (16.0). It was just the seventh time since 2015 that their starting field position average was below the 20-yard line in a game. They had lost five of the previous six games in which it happened.

–The Eagles are the only team in the league that has had at least two 80-plus touchdown drives in each of their first two games.

–Miles Sanders has rushed for 147 yards in the first two games. Ninety-nine of those yards have come on first down. He’s averaging 5.5 yards per carry on first down.

–The Eagles have attempted 10 screens in the first two games, completing eight of them. Four of A.J. Brown’s 15 receptions have been on screens (for 19 yards). Two of Dallas Goedert’s eight catches have been screens (for 30 yards).

–Vikings quarterback Kirk Cousins was just 3-for-9 for 38 yards on third down against the Eagles. Two of his three interceptions were on third down.

–Just 14 of the Eagles 140 offensive plays in the first two games have been run from under center.