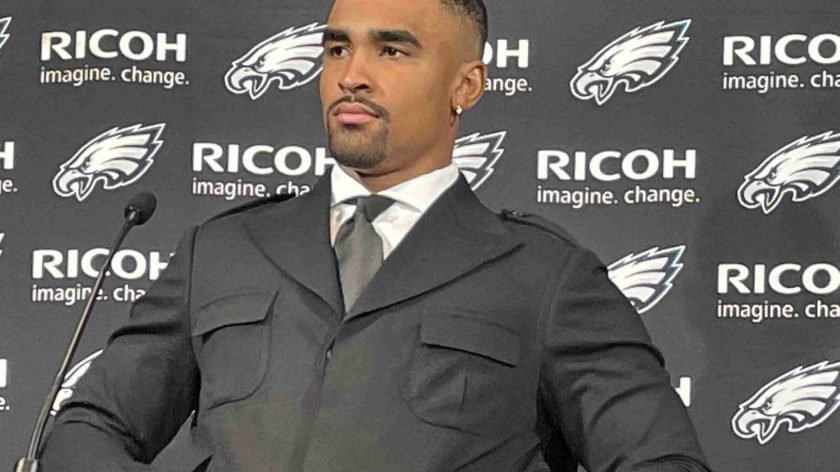 The Eagles may have something tangible now to convert lofty expectations into a reality. It may be a week late, but it could not have come against a better opponent, the Minnesota Vikings, and in a better situation than in their home opener, and on a better platform than Monday Night Football.

For the second-straight week, Jalen Hurts shined, completing 26 of 31 for 333 yards and a touchdown. He added 57 yards and two more TDs rushing in the Eagles’ 24-7 demolition of the Vikings on Monday night at Lincoln Financial Field.

The Eagles find themselves locked in an early NFC East first-place tie with the surprising New York Giants, each at 2-0, entering an interesting showdown with their former quarterback Carson Wentz this week in Washington.

Cornerback Darius Slay was just as superb as Hurts, shutting down the Vikings’ dangerous Justin Jefferson, who caught a career-best 184 yards on nine catches and two touchdowns in the Vikings’ season-opening win over Green Bay last week.

Jefferson caught six passes on 12 targets for 48 yards and was shut out of the end zone. Of the five times Cousins targeted Jefferson with Slay on him, Slay prevailed, knocking away three passes and picking off two others—both in the red zone, one in the end zone with 7:11 left in the game.

“We just wanted to come out here and play our type of football,” Hurts said. “I felt like early on we had a lot of things clicking. We have to do a better job of finishing. After last week after the game, I talked about the standard being the standard, and it’s only rising.

“I still feel we haven’t played to our standard yet. There is a lot to learn from. Obviously, in the second half as an offense, we have to do better, (Darius) Slay made a lot of plays on defense. They played great defense all night. We just have to go out and play our game and I know that starts with me. The preparation we had all week. We started off great.

“We have to do a better job of finishing, but we’ll take the win.”

The Eagles’ defense overall soundly crushed almost everything Minnesota tried. The Vikings (1-1) were 1-for-4 in the red zone and were held to 264 yards of total offense and 4-for-12 on third down conversions.

By halftime, the Eagles were clearly in control. They took a 24-7 lead by scoring on four of their first six possessions. If the first half version of Hurts consistently shows up this season, this is a team that could make a serious playoff run.

Hurts opened the game by completing his first 11 passes and by intermission had completed 17 of 20 for 251 yards and a touchdown and rushed for an additional 50 yards on seven carries and two touchdowns—including a career-best 26-yard score with 1:58 left in the half.

The Eagles had outgained Vikings 347-93, the most yards the Eagles had racked up in a half since 2010. More importantly, the Eagles converted 5-of-8 third downs, which included a third-and-eight on their first drive that resulted in a Hurts’ three-yard score and a third-and-six on their last series of the half that concluded in a Jake Elliott 38-yard field goal.

A huge mistake by the Minnesota defense was coming out in a shell defense, with the safeties playing up high daring Hurts to pick them apart.

Eagles receivers were open all over the field. During the times the Vikings tightened up and went to a zone, Hurts found the seems to hit eight different receivers.

He also caught a blown Minnesota coverage by connecting with Quez Watkins for a 53-yard TD pass and a 14-0 lead.