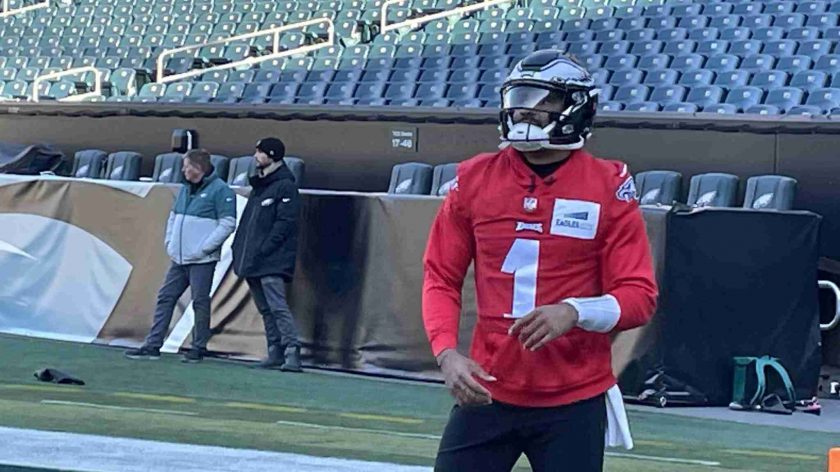 PHILADELPHIA – Jalen Hurts is “trending in the right direction” when it comes to a potential return from a sprained throwing shoulder and the MVP candidate has been listed as questionable for Sunday’s game against the New York Giants.

Hurts has missed the past two games — both losses — for the 13-3 Eagles, who still need a win or a Cowboys loss against Washington to win the NFC East. For the No. 1 seed in the conference, Philadelphia needs either a win against the NYG or losses by both Dallas and San Francisco.

The Eagles also waived offensive guard Sua Opeta, presumably opening a roster spot for punter Brett Kern, who was signed to the practice squad once Arryn Siposs was injured but has no more elevations left.

More roster machinations could be coming as well because the 21-day practice windows were opened this week for safety C.J. Gardner-Johnson, DE Robert Quinn, and offensive lineman Brett Toth. The Eagles would need to create roster spots for each with Maddox, Bradley, and Robinson candidates for injured reserve.

Quinn is the most likely to be activated for Sunday due to Sweat’s absence and sounded like he was ready to go after arthroscopic knee surgery.

The playing Gardner-Johnson seemed to be packing up equipment for the game on Friday but declined to talk to reporters this week.

The sentiment is that Hurts will play Sunday.

“He looks great, man. He’s a freak,” backup Gardner Minshew said. “He’s right back to where he needs to be and I’m excited to, you know, see him whatever happens moving forward.”

Minshew, meanwhile, sounded like a guy who didn’t necessarily take advantage of an opportunity.

“I just wish I could help the team win a little bit more.”

The Giants are locked into the No. 6 seed in the playoffs and are expected to rest many of their key contributors.