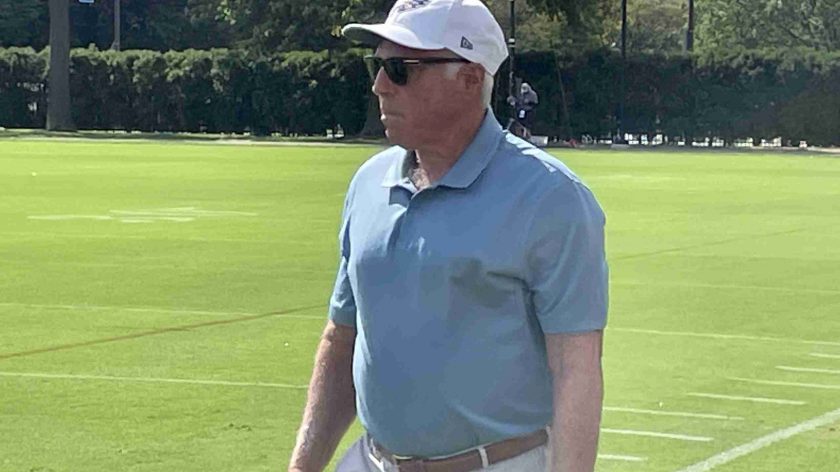 PHILADELPHIA – In the first step in what is expected to be a lengthy succession plan, Eagles owner Jeffrey Lurie has formalized his son’s entrance into the family business.

In many ways, Julian Lurie’s life has mirrored his father’s role as steward of the city of Philadelphia’s passion. The younger Lurie is 27, and his father bought the franchise on May 6, 1994, just over 28 years ago.

“Obviously, he grew up in the family that owns the team,” Jeffrey Lurie said of his son at the league meetings back in March. “He’s an avid Philadelphia sports fan. He loves the Eagles and loves the NFL.”

Now 70 Jeffrey Lurie has no plans of stepping down as the Eagles’ owner and CEO but you now know that when he does, his son will be there to take the baton.

That wasn’t exactly a secret but Lurie was always cognizant of allowing his son to choose his own path and if a passion took the Harvard-educated Julian elsewhere his father wasn’t going to press the issue when it came to professional football.

“He loves all aspects of it,” Jeffrey Lurie said of his son. “And so what I do is expose him at different times to different things. I let him observe coaching searches — those are big decisions to make. I think he gets exposure to the business side (and) football side. And inevitably it’ll be more of a formal aspect to it if he aspires to do that.”

The formal aspect to it arrived this offseason.

Julian had made the decision that he wanted to follow in his father’s footsteps and started taking on a greater role in the organization with the first public clue being his appearance with Howie Roseman and Nick Sirianni at The Senior Bowl back in February.

The attrition the Eagles suffered in the front office this offseason has also forced a re-imagining of both football operations and the scouting staff, something that also allowed Philadelphia to better define Julian’s day-to-day role.

As first reported by The Athletic’s Bo Wulf and since confirmed by an NFL source to JAKIB Sports, Julian will have the title of Business and Football Operations Strategy, a nod to his apprenticeship on both the business and football sides of the organization.

According to Wulf, the title came with a permanent office space in the NovaCare Complex earlier this offseason for the first time.

“He really has a great feel for many aspects of the sport,” the older Lurie claimed of Julian. “After college, he went into the NFL rotational program to learn much more about the business side and the league side from New York, working for the NFL for all those years.

“I’ve always, sort of like a lot of children of families that own teams, kind of (brought) him along in terms of I want to expose him to all aspects of both the business side and the operational side, the nuts and bolts, yet also the strategy side. He’s a real sharp guy.”

What kind of imprint Julian Laurie has on the organization will unfold over the coming months and years but he’s obviously in a position of power with his father and has been described as a big believer in analytics and a big backer of Vice President of Football Operations and Strategy Alex Halaby, essentially the leader of the organization’s well-regarded analytics department.

Halaby’s job description is expected to increase when the Eagles finish their front-office restructuring although how much that is tied to Julian Lurie’s influence is debatable.

“{Julian] is gonna have so much more going into it than I ever did if he chooses to want to someday own and run the team,” Jeffrey Lurie noted. “I mean, he’s gonna have a gigantic advantage. He won’t make some of the mistakes that I made.”