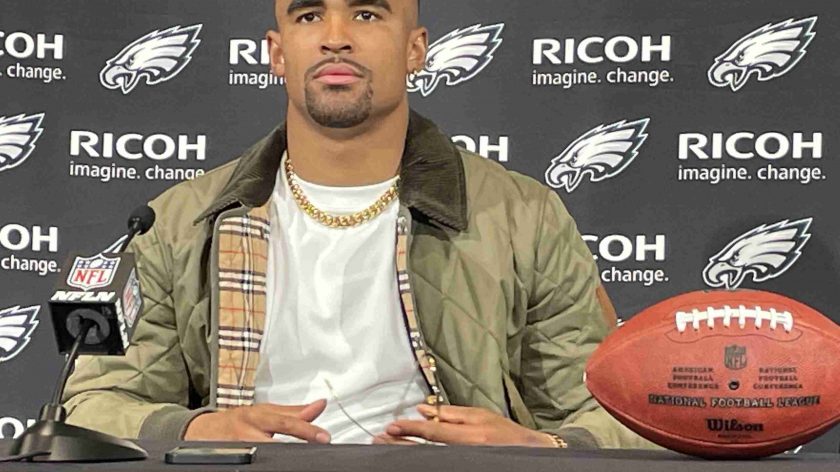 Nick Sirianni had to let the world know, or at least those around the Eagles’ locker room in the bowels of Lincoln Financial Field, when he yelled out, “How ’bout those Eagles,” Sunday night, after the Eagles managed to get by the Dallas Cowboys, 26-17, to move to 6-0 and remain the only undefeated team in the NFL.

The Eagles remained undefeated, after almost blowing a 20-point lead.

This is the third time in franchise history the Eagles have started a season 6-0 (1981 and 2004 were the other two times).

Asked if it was a relief to finally get by the rival Cowboys, Sirianni actually said no, “Our greatest motivation is each other,” he said. “When you guys ask about bulletin board material, we have each other’s back. Teams are either coming together or they’re not. And this team’s coming together.

Once again, the Eagles resorted to their favorite quarter, the second, to open up the game with 20 unanswered points. So far this season, they’ve scored 112 points in the second quarter, just 14 points in the first, 17 in the third, and 18 in the fourth.

For the first time this season, Jalen Hurts threw for under 200 yards, though was modestly efficient, completing 15 of 25 passes for 155 yards and two touchdowns. A.J. Brown caught five passes for a team-high 67 yards and his second touchdown of the season, and Miles Sanders rushed for 71 yards on 18 carries and a touchdown.

The Eagles defense was able to confuse Cowboys’ backup quarterback Cooper Rush, who completed 18 of 38 for 181 yards and a touchdown, into throwing three interceptions, two by safety C.J. Gardner-Johnson and one by cornerback Darius Slay. Entering the game, Dallas had only turned the ball over twice this year.

But the Eagles still needed a Hurts’ seven-yard scoring pass to DeVonta Smith to seal the victory with 7:02 to play.

After the Eagles bolted to a 20-0 lead, the Cowboys responded with 17-straight unanswered points of their own, on a Brett Maher 30-yard field goal near the end of the half, a third-quarter Ezekiel Elliott 14-yard run, and Jake Ferguson 7-yard TD pass from Rush with 14:39 to play.

That was enough to awaken the Eagles’ offense. They proceeded to march 75 yards on 13 plays, 10 were running plays, when Hurts found Smith alone in the end zone for a comfortable 26-17 edge.

“You come out and you’re in a lull,” Sirianni said. “This happens in training camp. You hear me say this in training camp sometimes, ‘Were in a lull.’ This is going to happen in the season. All it takes is somebody to make a play to get us out of this lull.

“You lean on your best guys in that situation. What was really sweet about it is we got to lean on five guys. We got to lean on the offensive line in that scenario. It’s what happened last week in Arizona on that long drive. We leaned on that offensive line. We leaned on the guys that we knew could make a play and consistently make a play up front.”

The game appeared over by halftime. After a slow start, the Eagles scored on their next four possessions—thanks to a pair of Rush interceptions, his first this season.

The Eagles held a 20-3 lead by intermission, beginning with a Miles Sanders’ five-yard touchdown run, made possible by some gutsy decisions by Nick Sirianni early on.

On the Eagles’ second drive of the game, on fourth-and-three at the Dallas 38 with 3:38 left in the first quarter, Sirianni opted to go for it. He showed great confidence in his team, and the play call had Dallas moving one way, as Hurts connected with Brown going in the opposite direction.

It set the tone of the game.

What was unique about the play was Dallas’ outside linebacker and game-changing threat Micah Parsons was left unblocked. Instead, right tackle Lane Johnson closed down on the Cowboys’ defensive end.

Parsons didn’t seem to know what to do. He hesitated for a second, not knowing to pick up Hurts or Brown, who ran by him. Hurts darted a short pass to Brown that turned into an 11-yard gain.

Later in the drive, Sirianni went for it again at the Dallas 10, on fourth-and-four with eight seconds left in the first quarter. A Dallas’ neutral zone infraction gave the Eagles a first down and the wave began.

The Eagles’ second team came through a deflected pass by cornerback James Bradberry, intended for Michael Gallup. Safety C.J. Gardner-Johnson was there to intercept the deflection with 14:47 in the half at the Dallas 44.

That led to Hurts tossing a short pass to Brown, who the rest, scoring from 15 yards out and giving the Eagles a comfortable 14-0 cushion.

Later in the second quarter, Bradberry, who had been giving up 2.4 yards allowed per target, second in the NFL to Derwin James entering the game, came back to deflect another Rush pass with 9:24 left in the half on a critical fourth-and-one at the Dallas 34.

The defended pass gave the Eagles possession, which resulted in an Elliott 51-yard field goal and commanding 17-0 Eagles lead.

The Eagles closed the half on a Darius Slay interception, which the Eagles converted into an Elliott 30-yard field goal.

And just when it looked like the Eagles would run away, linebackers Kyron Johnson and Nakobe Dean got caught running inside on the ensuing kickoff, giving Dallas speedster KaVontea Turpin a running lane that he took for 63 yards, setting up the Cowboys’ only points of the half.