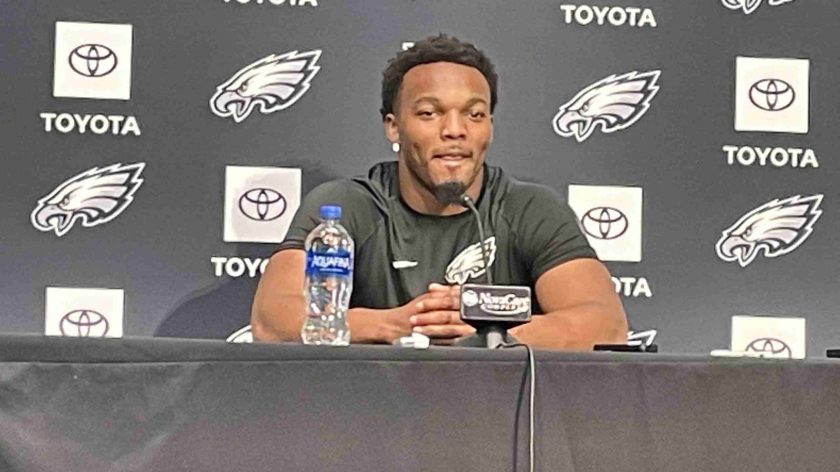 The linebacker position has been a significant area of concern in Philadelphia over recent seasons.

There have been plenty of underwhelming options, including high-profile stabs like Kiko Alonso to failed mid-range picks like Nathan Gerry and Band-Aid attempts in free agency like last year’s swing and miss Eric Wilson.

This 2022 position room is giving off positive vibes with a healthy balance of experience, along with younger players with upside.

The Eagles have essentially switched the position from a coaching perspective with the SAM linebackers working with the defensive ends with pass-rushing specialist Jeremiah Washburn leading the room. The off-ball LBs (Mike and Will) work with assistant Nick Rallis.

South Jersey native and Temple product Haason Reddick should give the defense an important spark. In many ways, Reddick is listed as a linebacker in name only but his presence coming off the edge should turn things around after an underwhelming 2021 season rushing the passer. Philadelphia ranked 31st in the league in sacks with only 29 last season while Reddick alone racked up 11 with Carolina. His pass rush should prevent offenses from driving down the field so effortlessly, as seen throughout the last season.

A former safety in college at West Virginia Kyzir White is viewed as one of Roseman’s more notable signings in free agency.  White led the Los Angeles Chargers with 144 tackles last season and is regarded as a modern LB who can run with backs and tight ends in coverage as a nice complement to a thumper like T.J. Edwards.

The bulky run-stuffing Edwards is coming off his best season so far with Philadelphia with 130 total tackles and has established himself as perhaps the team’s most accomplished LB. That said, Edwards will have his work cut out for him with so many new additions.

Nevertheless, Edwards’ productivity and knowledge of the defense will ensure him the opportunity to be a consistent presence on the field for defensive coordinator Jonathan Gannon to rely on.

When it comes to young players to keep an eye on, third-round rookie Nakobe Dean is pretty high on the list after a Butkus Award-winning season at Georgia.

Philadelphia is hoping that Dean can maintain that level of productivity at the professional level. Known as a defensive field general who directs other players to the right spots while still managing to make plays himself, Dean’s ability to analyze and recognize plays pre-snap is rare.

There are significant questions about Dean’s health in both the short term (a strained pec) and long term (concerns over potential regeneration in a knee and shoulder) but if the Mississippi native proves healthy he may be too talented to leave on the sideline.

“He could become a three-down linebacker for this team because of his ability to do so many different things exceptionally well,” said Derrick Gunn on JAKIB Sports “Sports Take” earlier this week when discussing Dean.

The Eagles plan to cross-train Dean at both the MIKE and WILL positions and it will be interesting to see how the pieces fit.

Getting the chance to play alongside the athletic White could give a better feel as to how Dean’s playing style works in the NFL. The Eagles might bring the rookie along slowly because of the presence of Edwards and 2020 third-round pick Davion Taylor but the possibility of Dean becoming a three-down linebacker sometime this season is real once he gets a reliable grasp of the defense and a taste of what the NFL is like.

Overall, Philadelphia’s defensive improvements at linebacker provide a positive outlook for the season. While the top options at linebackers are likely solidified, the depth at the position is just as valuable. Players like Taylor and Shaun Bradley continue to gain valuable experience and rookie Kyron Johnson should join second-year option Patrick Johnson as backups for Reddick.