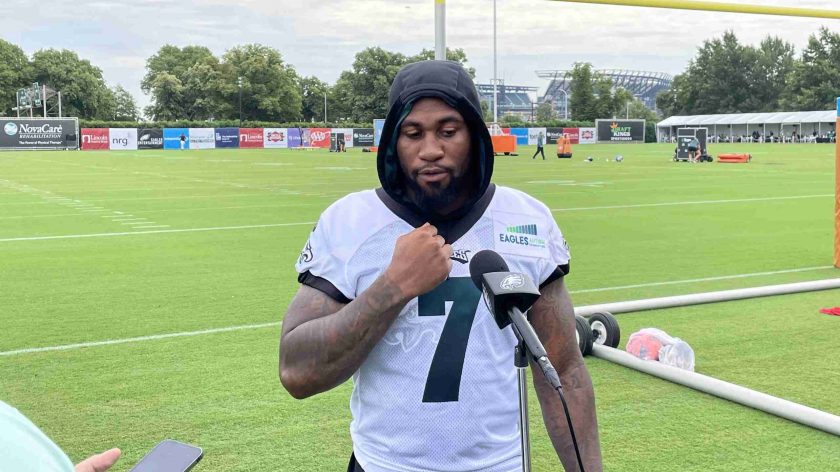 PHILADELPHIA – The NFL’s Defensive Player of the Year award is likely headed to Nick Bosa but that hasn’t stopped the Eagles’ Haason Reddick from trying to break into the conversation.

The star pass-rusher of a defensive unit pushing the NFL record, Reddick has 16 sacks on the season and an NFL-leading five forced fumbles. The Temple product and South Jersey native is one of only three players this century that had produced those numbers, along with three-or-more fumble recovers joining T.J. Watt, who did it last season when he won DPOTY and Chandler Jones (2019).

“He’s one of the best players in the NFL, I’d say that,” Eagles defensive coordinator Jonathan Gannon said of Reddick before joking. “If I didn’t drop him [in coverage] so much, he’d probably have 25 [sacks].”

Gannon is often vilified by the fan base despite being the architect of the top-ranked defense in the NFL and a unit with 68 sacks, four shy of the NFL record set by the 1984 Chicago Bears.

Reddick himself echoed that sentiment a day earlier when talking with reporters at his locker.

“You know the stats are all fine and well and I’m happy to be having the year that I’m having, but when we’re this close and we’re fighting for something so important that’s not the thing on the front of my mind,” Reddick said. “Right now I’m worried about being the best I can be and helping my team win this next game so that we can get that No. 1 seed and lock it up at the end of the day so I’m not really focusing on the stats like that. Just more so focusing on what I can do to help the team win.”

The Eagles can clinch the NFC East and the No. 1 seed in the conference by beating the New York Giants on Sunday.

Reddick. meanwhile, was asked about the DPOTY award.

“I don’t know how to really answer that,” he said. “I’m active on Twitter, I’m on social media like anybody else is and I see the things being said. I just keep working. That’s all I can do because at the end of the day what I want what I believe isn’t the case.

“I can’t go out there and decide that award for myself. There are factors that have to play a part. Whether they want to show a blind eye to what I’ve been doing or if they want to give recognition that’s up to them. The people who know, they know. I’m just going to continue to try to play the best football I can and at the end of the day.”