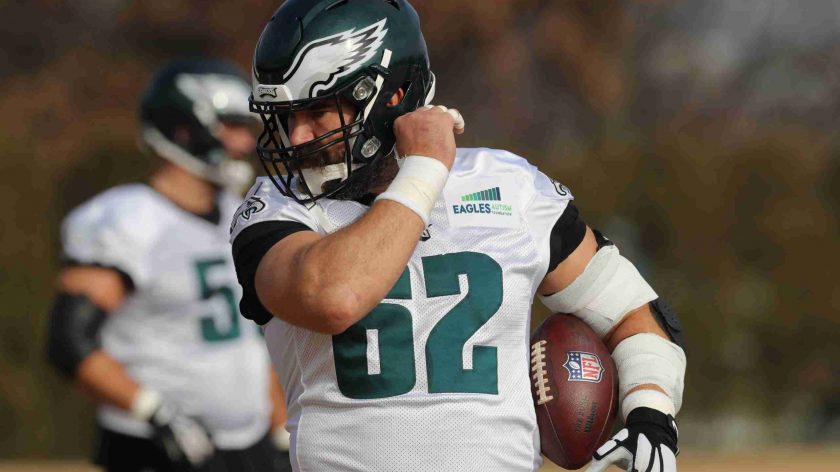 Once you turn the corner on the fourth of July you can almost smell the freshly-cut grass and envision NFL training camps.

The dead period between OTAs and the kickoff to camp in Philadelphia has featured an almost universal optimistic slant on the roster Howie Roseman has built.

The baton will be handed off to Nick Sirianni and the continuity of his coaching staff later this month with the expectations being perhaps the biggest hurdle in front of the Eagles.

The good news is the floor for this football team is tethered to Roseman’s DNA as an architect, the default setting of building up front on both sides of the football.

Philadelphia is in the conversation for the best offensive line in the entire NFL and its defensive line is top-10 at worst.

The OL features three potential All-Pros in center Jason Kelce and tackles Lane Johnson and Jordan Mailata with second-year left guard Landon Dickerson on track to be a difference-maker early in his professional career. The one question mark is RG but the Eagles have plenty of options with Isaac Seulamo, Jack Driscoll, and Sua Opeta all capable of holding things down.

The depth is also impressive with 2019 first-round pick Andre Dillard and 2022 second-rounder Cam Jurgens buttressing the losers in the RG competition. The group as a whole reaches double-digits when it comes to NFL-level players in a league where many teams have trouble finding five competent offensive linemen.

The DL isn’t quite that good but when you add a proven overhang player with two double-digit sack seasons on his resume to the mix in Haason Reddick, the pieces may start to fall into place.

Once you have the finisher, more well-rounded edges like Josh Sweat, Brandon Graham, and Derek Barnett can find their comfort zones when it comes to affecting the opposing offense.

Meanwhile, the interior was solid before adding Jordan Davis with the No. 13 overall pick in the draft. With the former Georgia star in the fold, you start to wonder how Jonathan Gannon can even get second-year up-and-comer Milton Williams significant reps with Fletcher Cox and Javon Hargrave continuing to produce at high levels.

That landscape means you can feel comfortable betting your bottom dollar that the one thing the Eagles won’t be is a bad football team because when you can block the opposition, you’re going to be in a position to win games. Conversely, if you can’t block the other side, you’re in for a long 60 minutes.

The one caveat for every NFL team is injuries, especially multiple ones affecting the same position.

On paper, the Eagles will be able to block just about everyone on their schedule, and more often than not the opposition will have a number of headaches to deal with on the Philadelphia defensive line.

To reach the ceiling is where the flashier parts come into play and Jalen Hurts will certainly have to prove he can get the football to A.J. Brown and Devonta Smith consistently.

There will certainly be some hiccups to that but you can rest assured that any hand-wringing over paths to poor results is safeguarded by the genetic advantage of a sound roster-building philosophy.