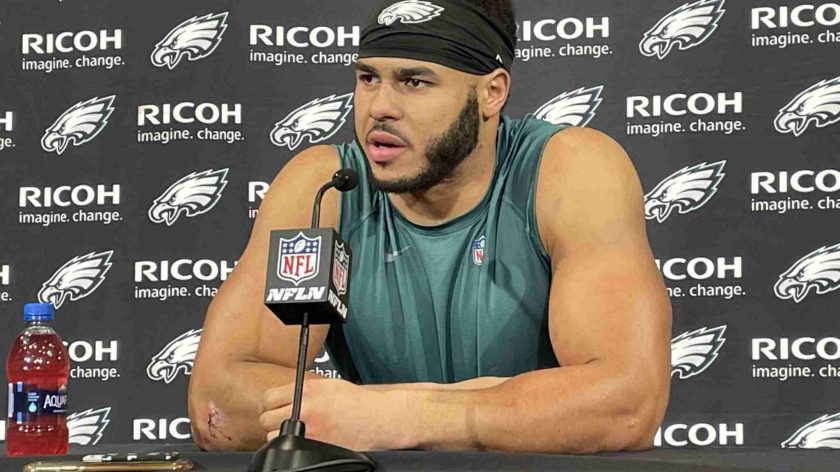 PHILADELPHIA – The adjective was as striking as it was descriptive.

And it came from the quarterback of the Eagles defense that allowed 209 total yards and just 10 points in an emphatic 35-10 win over Tennessee.

“Honestly, I thought our D-line just ruined that game,” said linebacker T.J. Edwards, who was graded out as the best defender on the unit by Pro Football Focus. “I thought they were dominant, all across the board. They’re stopping the run, and in the drop-back pass game they were getting to the quarterback as well, so I thought the front had a really good game.”

Jim Schwartz, who returned to Philadelphia Sunday as a senior defensive assistant with the Titans, used to describe the defensive line as the engine of his defense. Little has changed with Jonathan Gannon running things, although the sentiment has shifted a bit with the goal morphing from stopping the run first and foremost to limiting explosive plays.

That means Gannon gives the front “tough duty” as he describes it with the unit expected to stop the run with light boxes and get to the quarterback with four rushers more often than not.

The results have been what Edwards might describe as striking.

The two statistics the Eagles care about besides the scoreboard where they are 11-1 are turnovers and explosive plays. From a defensive perspective, the team leads the NFL in interceptions (17), strip sacks (seven), and generating turnovers as a whole (1.9 per game). Gannon’s unit has also allowed only 32 plays of 20-pul yards, second in the league.

For the aesthetics crowd, the Philadelphia defense is also No. 2 with 42 sacks and they do all of that in nickel the vast majority of the time while sending an extra rusher just 99 times (16th in the league).

“You look at the stats and tell me what you see,” edge rusher Haason Reddick said. “I’m not trying to toot our horns. We have a lot of ball to play, but we’re looking really good.”

To boil that down the Eagles are accomplishing their goals without taking unnecessary chances, exactly what the Vic Fangio-inspired defense was designed to do.

When things are clicking it’s because the linemen are winning up front.

“It was all about winning our one-on-ones and upfront [against the Totans], it was nasty in there,” Edwards said. “You could just feel the presence of our D-line getting after them and safeties filling in the box when they had to. It was a really good game.”

The front took the Tennessee challenge seriously, growing tired of being told how tough and physical the Titans and running back Derrick Henry typically are.

“When you’re sitting at 10-1 and you have a team with more losses than you and people are talking as if you didn’t do anything the whole year, it’s crazy, it’s absurd,” Reddick said. “We didn’t take too kindly to that. It was a challenge for us.”

Challenge met as the two-time rushing champion finished with just 30 yards on 11 carries and a long of a paltry six yards.

“I felt like everyone’s attitude was to stop Derrick. That is all we kept hearing. That is what they are going to do,” defensive end Brandon Graham said. “They are going to run the ball, screen us, and play quick ball with play-action and deep shots. That is exactly what we got and I feel like we started from the jump with meeting them at the line and making tackles.”

Graham got to Ryan Tannehill and so did Reddick, Fletcher Cox, and Javon Hargrave. Josh Sweat, meanwhile, had his best game of the season with two sacks and three QB hits. He and Reddick combined to meet at Tannehill seven different times.