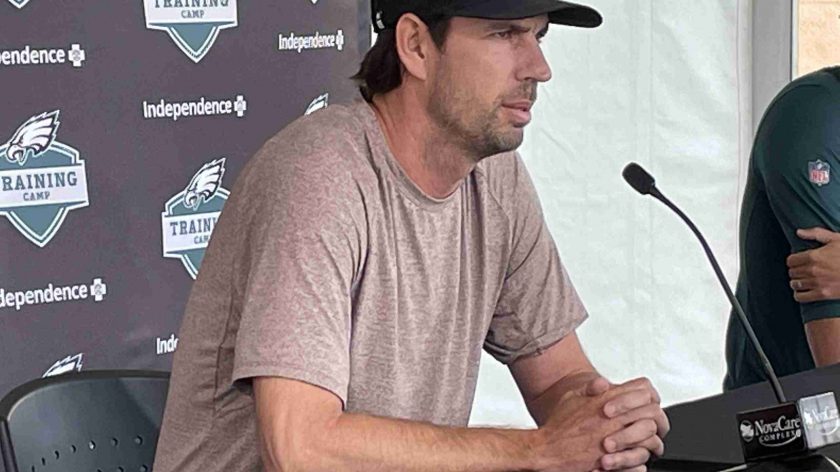 PHILADELPHIA – Typically you get five words from Jonathan Gannon when the talk turns to the next step in his coaching career.

The Eagles’ defensive coordinator is reportedly a finalist for the Houston Texans head-coaching position for the second straight year and Gannon interviewed for the position virtually on Saturday. Joining Gannon on the interview circuit this year is offensive coordinator Shane Steichen, who is even more in demand as the play-caller for a dynamic offense with a third-year quarterback who developed into a second-team All-Pro in Jalen Hurts.

Steichen was requested by three teams for interviews: the Texans, Indianapolis, and Carolina.

Each coordinator met with the media for the time since their interviews, which were permitted because the Eagles were on their bye week. With the divisional round of the playoffs looming on Saturday night against the New York Giants, neither assistant wanted to upset the apple cart.

Gannon’s five-word mantra of “be where your feet are,” was downgraded to three: “New York Giants,” an indication of where his focus is.

The Eagles’ DC was interviewed by three teams last year: Denver, which hired and fired Nathaniel Hackett, the Texans who hired and fired Lovie Smith and Minnesota, which went 13-4 in the regular season but lost in the wild-card round of the playoffs to the Giants.

Steichen tried to ignore the interview subject when asked by JAKIB Sports about juggling the prep aspect of the bye week with his interviews, focusing only on the preparation

“It was good. We went through a lot of self-scout stuff, looked at what we had done well throughout the year, things we need to improve on. Did a lot of stuff that we felt comfortable with,” Steichen said. “I think we got better from that, and we went from there.

Not so fast as another reporter followed up with the interview query.

An NFL source did offer some background on Steichen’s interviews, one of which went upward of 4 1/2 hours from his South Jersey home.

With only five openings and Sean Payton, the first domino expected to fall teams may have to be patient through a potential deep run in the playoffs if they want either of the Eagles’ coordinators.

Sporting a new sweatshirt the Eagles have given out reading “A Fan of Change,” Steichen laughed.