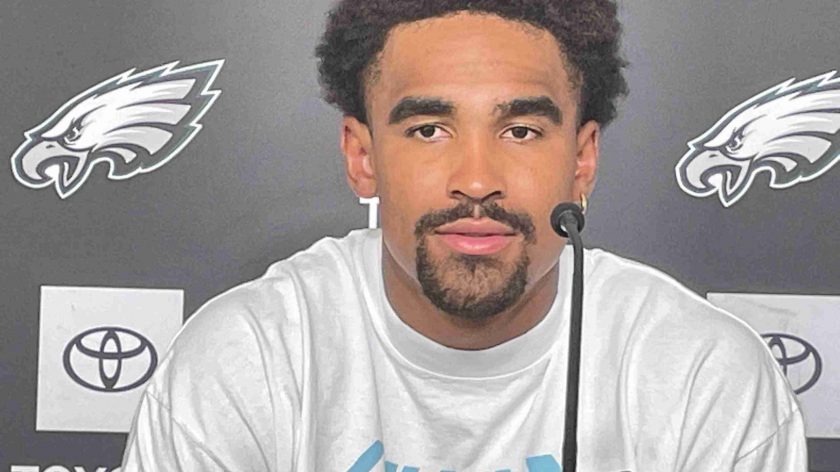 No, the third-year quarterback isn’t writing a book and not looking for jacket buzz but he is trying to prove to the Eagles and the rest of the NFL that he belongs in the franchise QB club.

After two weeks of on-field OTAs with a host of caveats, starting with the fact that reporters could only view Hurts on two occasions with no team work and only 7-on-7s to decipher, which are passing drills designed for the offense to succeed, it’s fair to say Hurts does look improved.

The numbers for those interested were 20-of-25 with four touchdowns and no picks, per WIP’s Eliot Shorr-Parks, who keeps diligent track of the numbers.

Jalen Hurts in the two OTA practices open to the media:

In the first session open to the media Hurts was without his projected third and fourth receivers — Quez Watkins and Zach Pascal — and in Wednesday’s practice, which was the final one of the spring, Nos. 1 and 2, A.J. Brown and DeVonta Smith were held out.

The four TDs were all deeps balls, two to Smith in when he was out there and one each to John Hightower and Watkins earlier this week.

There were also a host of other nice throws, including a deep out to Greg Ward that might have been Hurts’ best throw of all with reporters around and one obvious drop by Kenny Gainwell.

The old joke with Sam Bradford was that the football never hit the ground in 7-on-7s, a testament to the former Eagles QB’s accuracy, and Hurts, who hasn’t exactly been known for his pinpoint throws to date, came relatively close to that unsustainable bar.

“Jalen looks really good,” tight end Dallas Goedert said earlier this week. “Just him going through his reads, his progressions, I feel like the ball’s got a little more zip on it, he’s getting it out a little bit quicker, you see kind of a 1-2-3 throw. He doesn’t have as many hitches, he’s seeing the game faster, which is really promising.”

Nick Sirianni evaluates QBs based on four traits and accuracy is far and away No. 1, according to the coach, followed by decision-making. The latter two categories are arm strength and movement skills where the Eagles have already determined Hurts checks the boxes.

So the goal was working on mechanics with Hurts, especially footwork, something that in Sirianni’s mind would enable his young QB to trust himself more which would spawn quicker, more defined reads in an expedient fashion.

“I’ve also noticed just the crispness of the drop,” Sirianni noted. “It’s been the fundamentals — his fundamentals have improved, and he’s really worked hard at that. He’s really seeing where to go with the football and going there quick.”

Hurt is also more relaxed in Year 2 of the Sirianni offense, the first time the signal-caller has been in the same system for consecutive years since high school.

“What we’ve done as coaches is figured out what he likes and what he’s good at and all these different things,” Sirianni explained.

The final piece to the puzzle is what Sirianni describes as football character and the Eagles believe Hurts has that in spades.

“His determination to be great is something that you see every day,” Goedert added. “I was out there in California with him working, and the detail that he has with the coaches looking at film, looking at his throwing mechanics, things like that. He really wants to be great and he shows that each and every day.”

Add all the context you need but the Eagles believe they saw a better QB this spring in Hurts.

“He’s working every day to get better, and I’m really pleased where he is right now,” Sirianni said.