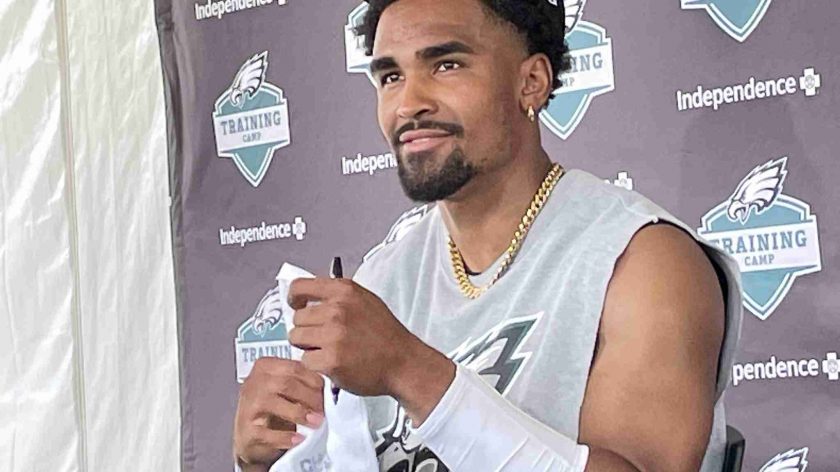 PHILADELPHIA – The Eagles knew they were getting a WR1 when Howie Roseman made the draft-day deal to get A.J. Brown. The organization also understood the fringe benefit of providing Jalen Hurts with one of his best friends.

What the Eagles weren’t expecting was a bodyguard but why not? If you get what you pay for, Brown is overdelivering by wearing three different hats in exchange for the $100 million contract extension he received from Philadelphia.

It was Brown who immediately jumped on his sword via social media when Derrick Gunn of JAKIB Sports, a very credible reporter, relayed information of a poor OTA practice by Hurts.

The disconnect to it all was the description in that everyone from Tom Brady on down will have poor practice sessions. In fact, sometime during the summer, it’s a safe bet that Hurts will have another one because the third-year quarterback is human.

The controversy was rehashed with Brown on Wednesday at the start of training camp.

“It’s important because he’s the quarterback of my team, No. 1, and he’s my friend, No. 2,” Brown said of his Twitter defense. “And the story wasn’t true.”

The context came from there, however, as Brown soft-peddled by explaining what practice really is.

“These are the times when we try things,” Brown said. “I’m not going to win every rep, he’s not going to make every throw.”

Hurts, known for avoiding what he calls rat poison (good or bad), wasn’t even aware of the kerfuffle until he caught with Brown the day the receiver took to social media to defend his friend.

“I didn’t even know he did it,” Hurts claimed. “[The criticism] was casual to me. Must have been a slow [news] day.”

Expectations are always high in Philadelphia but there are lulls and 2021, Hurts’ first season as the starter, was one of them.

Once the Eagles surpassed the forecasts of a team in transition by making an unlikely playoff run, the grading on a curve had run its course. The Eagles are now expected to make the postseason in 2022.

In other words, one step at a time.

“I think the other thing we talk about a lot is our most talented teams [in the past] have not necessarily been our best teams,” Roseman said. “You can have all this talent, but them coming together and fitting the right pieces in place is the most important thing. That’s what this camp is for, coming together as a team and making sure the talent meets connection and goes into a place with the season where we’re feeling really good about the people.”

The most important person is Hurts and just as Brown was pictured wearing a hat proclaiming the start of practice ‘Hurts SZN,’ head coach Nick Sirianni was next to Roseman adorned with a t-shirt, sporting Hurts’ likeness.

Sirianni played the wardrove decision down, claiming the choice was a clean t-shirt at the top of the pile.

The coach, though, values connection more than anything else, and the show of support was calculated.

The kid-gloves treatment is a fine line, however, and quite frankly, Hurts doesn’t need others coming to his defense at the slightest sign of constructive criticism.

The young QB will sink or swim on his own merits. Merch is the sizzle, not the steak.

Sirianni did address that far more important part as well when it comes to Hurts pre-practice on Wednesday.

“You can see he’s a year further into it, decisions are being made quicker and faster each time he gets a rep at it,” Sirianni said. “Just like a lot of quarterbacks in this league, they get better with their decision-making over time. You’re definitely going to see that. You will still see his playmaking ability with his feet. I saw a more accurate passer in OTAs, and now he’s got to go and continue to improve every single day. But I really thought he had great progress in OTAs and just got to continue to ride the momentum of that through training camp each and every day.”

On-field Hurts showed some progress, like a brilliant back-shoulder throw to Quez Watkins with pinpoint accuracy, and some stagnant moments as well like when he was late getting the football out to Dallas Goedert, which enabled Marcus Epps to undercut the route and pick off the football.

The work has begun and all of it is just part of a process that will determine if the Eagles live up to the lofty expectations.

“We’re not just going to pop up and be in the first round of the playoffs or have a bye week,” Hurts said. “That don’t just happen. You’ve got to work at that.”